As some beautiful or palatable fruit is perhaps the noblest gift of nature to man, so is a fruit with which a man has in some measure identified himself by cultivating or collecting it one of the most suitable presents to a friend. – Henry David Thoreau 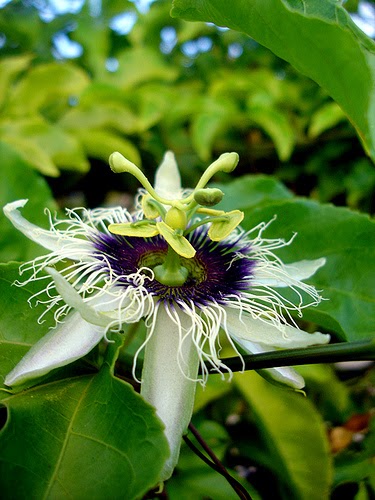 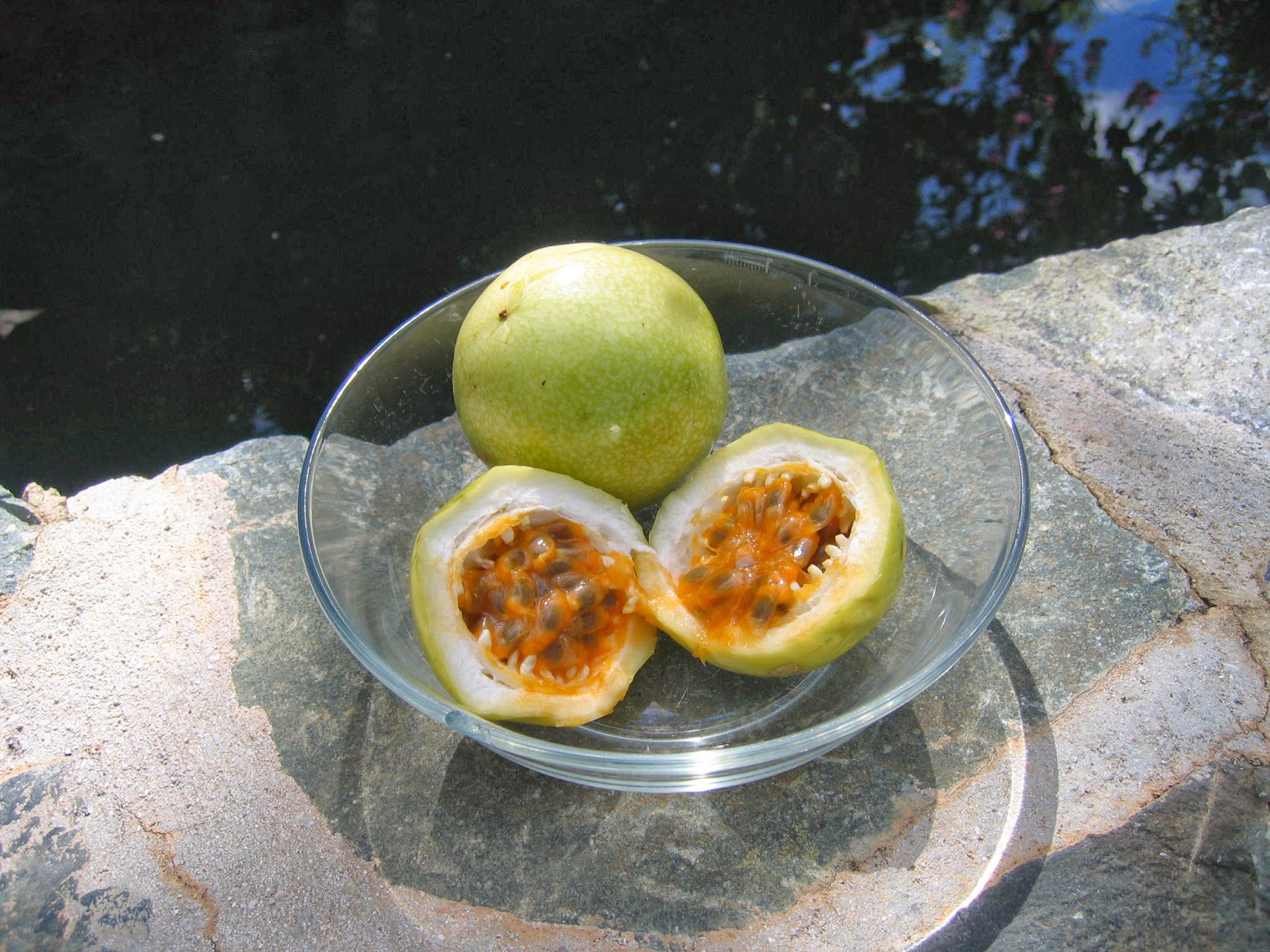 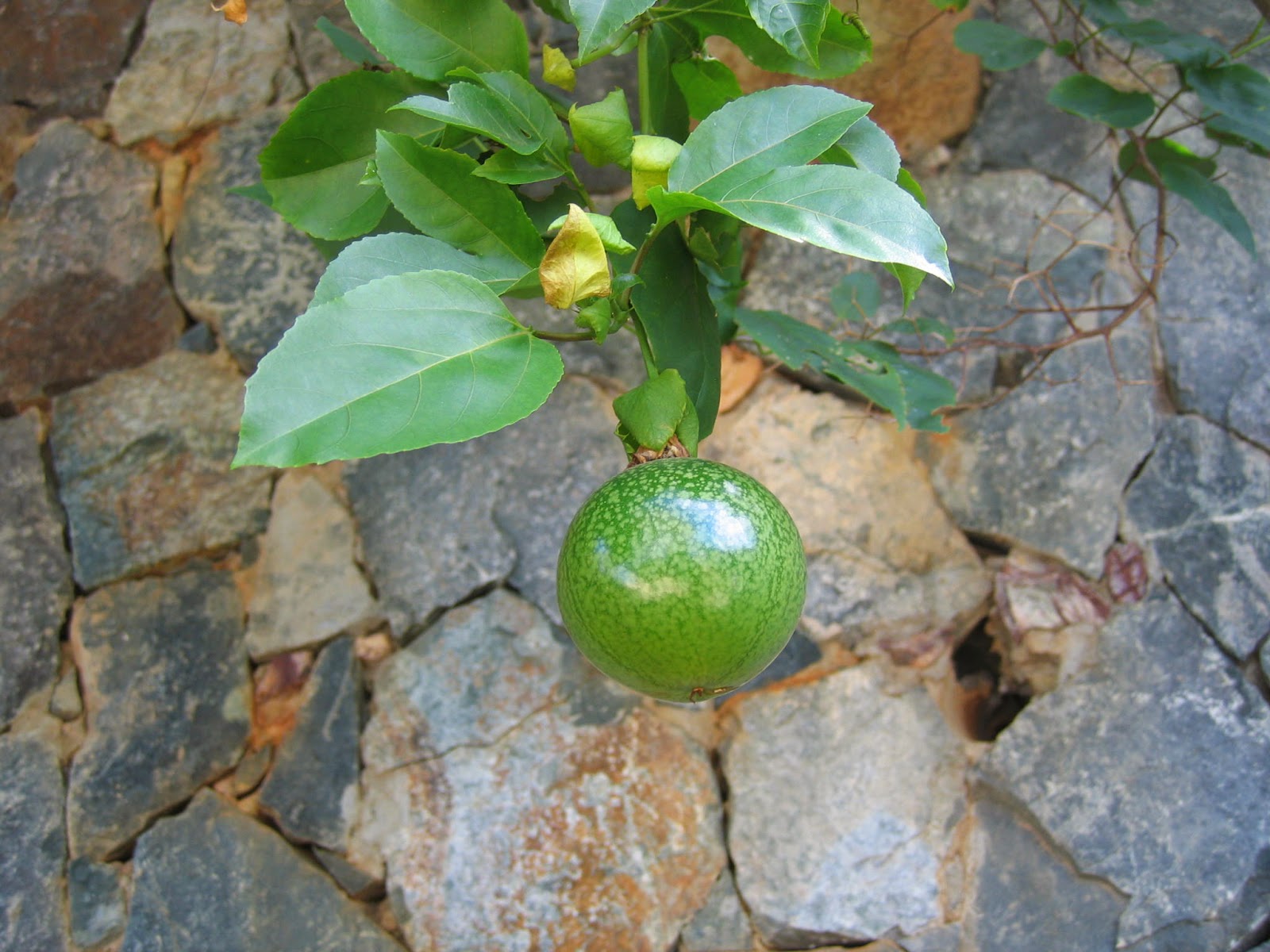 For Christmas one year my friend Rosemond brought us a bag of passion fruit she had picked from a neighbor’s vines. Before that I had only experienced passion fruit as an ingredient in sugary juice drinks. I had never seen or tasted the actual fruit.


When I looked into the bag, there were six pale, round yellow balls. We cut a few of them in half and sat out in the yard sucking the mass of tasty seeds and pulp and juice out of the cut halves of the fleshy skin. It was sweet but tart, and aromatic – and crunchy. I just chewed up the little seeds, since they didn’t come loose easily.


As Thoreau observed, a gift of fruit is always appropriate, but this was more than a momentary pleasure. It was such a delicious treat that I was careful to hide one on the back of the refrigerator for planting later. (Thoreau also said that one who eats the fruit should also plant the seed.)


After the holidays were over, I got some potting soil and a long narrow planter to start some seeds. I read that they needed darkness in order to sprout, so I covered them carefully with soil and then got a board to put over the planter to keep out the light. But they also needed to stay damp, so I couldn’t just leave them covered up. Also, I didn’t want the soil to get moldy, so I compromised by setting the board so it shaded the planter from the sun but still let some air through.


After a couple of weeks I was rewarded with lots of tiny sprouts, and I moved the planter so they could get some sun. Soon, as they started reaching over the sides of the planter, I had to choose the strongest ones, and moved some of them to their own pots. I knew they were vines and would need something to support them. First I tried to get them to climb up the posts supporting the upper deck, but the posts were too thick for the plants’ tendrils to latch onto. They seemed happiest, while still in their pots, when I put them near a tree that they could climb onto. But weak trees like the papayas weren’t happy being overloaded with clinging vines, and when the passion fruit vines climbed up bigger trees, I couldn’t see where they went.


Eventually I cut back the successful plants and put them in the ground next to the stone retaining wall behind the house. The idea was that they could climb the wall, and then the trees on the hill above it. We would be able to keep an eye on them there, and see if there were any flowers. And any fruit would fall onto the walkway for us to gather up.


The flowers, when they came, were first coy, with just a little bit of white peeking out from the fat green bracts encasing them. Then when they opened up, they shamelessly demanded attention. They were round with a frilly white fringe and a deep purple center. They were amazing flowers, the kind that make you feel passionate about the incredible abundance and diversity of life in the tropics.


You would think that these flowers got their name from the way they stirred up passions in those who observed them. But no. It did not come from a celebration of the gaudy joy of the flowers’ fragrant and colorful display. It was bestowed by evangelical Jesuits who arrived in South America to convert the native tribes to Christianity, and used the flowers as a prop in describing the death and rebirth of Jesus. The Latin name Passiflora was first used by the Spanish in the 1600s, and then adopted by Linnaeus, the great Swedish originator of botanical names, in 1753.


‘Passion’ is derived from the Latin verb ‘patior’ which means to suffer, or be acted upon, as in ‘patience’ or ‘passive’. So passion is not a feeling that we control, but one that takes us over. In the bright Caribbean sun, we may think of giving ourselves over to the joys of showy displays of color and fragrant juices dripping down our chins, but the name is meant to remind us instead of Jesus in the Garden of Gethsemane, where he was betrayed by Judas, abandoned by his other disciples, and arrested by the Roman soldiers, the night before he was crucified.


I can just imagine the rapt tribesmen gathering around as the dark-robed Jesuits shared the good news of the gospel – meanwhile holding up the purple and white flower and explaining that the frilly white corona is like the crown of thorns the Roman soldiers made for Jesus, the five stamens represent his wounds, and the three styles at the center of the flower symbolize the nails used to hold him on the cross.


Our own pagan excitement about the flowers led to disappointment. The flowers dried up and fell off without producing anything. When Mr. Small came by, he said we had to watch for bees. No bees, no fruit. Although some types of passion flowers are pollinated by hummingbirds or bats, the ones cultivated for their fruit need bees to carry the heavy, sticky pollen from one flower to another.


One day my husband saw that some bees had finally noticed our expanding patch of wandering vines and flowers, and then quite a bit later, passing by the back walkway, I saw five or six green balls hanging from a small tree that had been overtaken by one of the passion fruit vines. We were almost as excited as new parents – to have fruit after all those months of effort and then expectancy.


We left them on the vine until they fell off by themselves, but then let them sit on the counter until we thought they were sufficiently yellow to be ripe. Some of them apparently didn’t set well, because the seeds inside were while and undeveloped. Others were just as delicious as the first ones we had tasted, with all the complexity of sweetness and acidity and subtle fruity flavors.


Fun as it is to eat the pulp and seeds out of the skin, swallowing all those seeds can be harsh on the digestion. Soaking the whole mess in a little bit of warm water gives you a fragrant juice, and makes it easier to strain off the seeds. I haven’t tried it, but I have heard that you can use a blender to swirl the pulp around and separate out the seeds – but only at a slow speed or else the seeds will get ground up and show up as black grit in the juice.


Once you have some juice, you can mix it into drinks – fruit punch, tea, rum, or even vodka martinis. Or you can pour it over ice cream or cake, or add it to jello. I am not much of a cook, so I am generally satisfied with simple ways to appreciate my fruits.


One of the best recipe suggestions I found was to add passion fruit juice to a glass of champagne, for a special type of mimosa. There was also a nice recipe for Passion Fruit Sangria. In a large container you mix passion fruit juice with pineapple juice, white grape juice, some fresh squeezed lime and a bottle of white wine. After they have mixed and cooled for a while, you add ginger ale for some pep just before serving it.