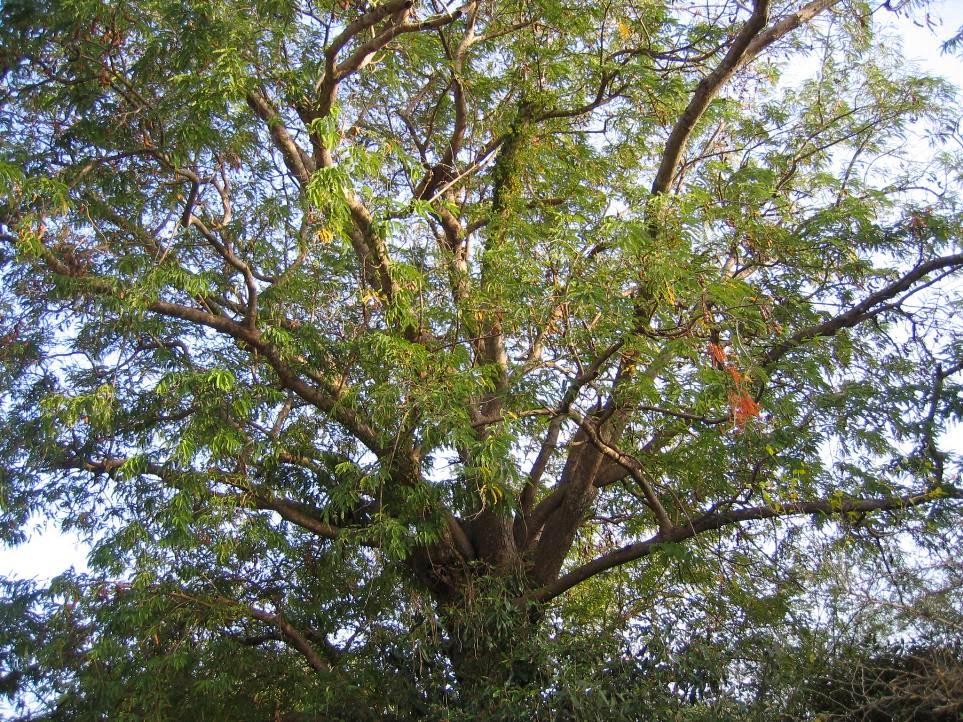 We were very excited when we found there was a tamarind tree growing near our new house. At first we didn’t notice it because it was so crowded in by other ‘bush’, including the invasive false tamarinds, or ‘tan-tans’, and the thorny ‘casha’ (more properly and aptly known as Acacia torturosa). Then my husband noticed some small, delicate flowers that looked like tiny orchids, and when the tasty pods appeared we recognized what a treasure we had already growing in our garden area.

There used to be a large tamarind tree by the tennis courts in town, which some local kids taught my sons to climb when they were small. It is gone now, removed to make room for the department of Motor Vehicles trailer. I wasn’t sure the strange sticky pods were edible, but my sons assured me that the ripe ones were sweet. Somehow the ones I chose were more sour than sweet, and made my mouth pucker up in a weird way. Later, though, I grew to love the local, hand-made tamarind balls, and the invigorating tamarind juice drinks from the Food Fair at Carnival time.


I didn’t realize that tamarind trees were considered ‘spirit trees’ until I read a book published by the University of the Virgin Islands entitled Remarkable Big Trees of the Virgin Islands. The book focuses on ethno-forestry, an approach that links botanical and cultural history. In a bid to protect the remaining important trees, it recounts local folklore about trees, and identifies the locations of some of the long-lived individuals still around. (For example, the tamarind tree on the Lameshur Bay Trail was probably already quite large in the 1700’s.)


There are sixteen types of trees in the Virgin Islands that have been identified as spirit trees, or sometimes as 'jumbie' trees. Including the tamarind – even though it is not really native but imported. According to the book, the first tamarind trees were reportedly brought to the Caribbean from India in 1647. After all those years, it is still only considered “borderline naturalized” – from a botanical point of view. Culturally, though, it seems to have been thoroughly accepted and endowed with social and spiritual significance.
Besides producing tasty but tangy treats, the big tamarind trees have provided plenty of shade over the years for social and political gatherings, performances and rituals. Robert Nichols, the author of the Remarkable Big Trees book, draws connections between Taino, African and West Indian traditions. “For Amerindians, West Africans and West Indians, trees sometimes take on ritual and symbolic roles. They are not only seen as providers of wood, food and other products, but also as mediators between human society and spiritual and ancestral realms.”
With roots in the underworld and branches reaching into the sky, big trees have taken on mythical dimensions in many different cultures. In the Caribbean, it is all about jumbies, which may be ghosts, or spirits of ancestors, or just spirits living in trees. Supposedly jumbies can be good or bad, but mostly it seems like they are not very friendly to humans. In the Virgin Islands, children used to be warned not to go under a big tamarind tree at night because the jumbies gather there after dark, and one might follow them home.


I’ve been feeling quite differently about the tamarind by our house since reading all that about jumbies. I have been afraid of being out at night in the country ever since I was a small child and we went from Manhattan to spend our summers at the family homestead in the wild woods of Maine. Whenever I had to go outside to the outhouse at night it was incredibly dark and quiet compared to the lights and sirens of Third Avenue – except for the whisperings in the spruce trees and the terrifying rustlings in the birches and alders closer to the house. Maybe my ancestors there were trying to contact me but, if so, I ran back so fast I never heard anything more except my own blood pounding.
In St. John the night is full of sounds – all sorts of creatures are out there chirping and whirring, swooping, and scratching around by the woodpile. How can I tell if there are jumbies there too?
In the Remarkable Big Trees book, it says that the first duty of a migratory people is to make a pact with the land and honor the ancestors of former inhabitants. I don’t really know who was on this land before me. Possibly there was a Taino village. Certainly part of a plantation at one point.


Our tamarind tree is relatively skinny, so it probably isn’t one of the old-timers. It is down the hill a bit and still surrounded by bush and stinging nettles. There is no crossroads or flat gathering place beneath it, so I doubt there were any rituals performed there. I went down to give it a closer look and felt a little uncomfortable when I pulled off one of its fruits. What if the spirits didn’t want me messing around with their stuff? Especially since I am not even close to being “borderline naturalized.”


Maybe concerns about the vengeance of jumbies will make people think twice about cutting down the big old trees. Or maybe it just seems stupid and superstitious to believe that trees have anything to tell us about life and death, or what lies beyond our current development plans. 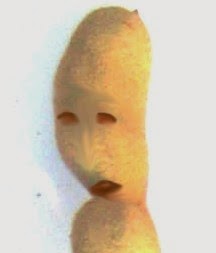