When we were building our house, the workmen from St. Lucia sometimes threw seeds from their lunchtime melons onto the bare slope in front. We had put in some plants to stabilize the soil, but they were still small and the space was looking pretty raw. Since all sorts of stray plants can sprout up on a clear spot of land, no matter how steep, we didn’t even realize what sort of vine was crawling up and down the hillside until we noticed a nest of tiny cantaloupes right in front of the house. 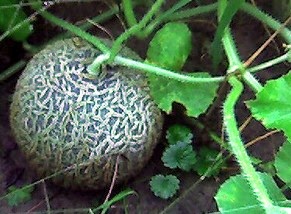 Even though my sons now tower over me, it still seems like a miracle to me to see how much exuberant growth can come from just a few tiny well-placed seeds. My husband and I felt like proud parents when the first furry little melon balls appeared on the vines, but were as innocent as babies ourselves when it came to understanding how the miracle of conception had actually occurred.


I had learned a few things from my earlier research on papaya reproduction, and wondered if cantaloupes enjoyed similarly complicated sex lives. I discovered that unlike other vines (but like the notorious hermaphroditic papayas) cantaloupes can produce some ‘perfect’ flowers that have both male and female parts. But this proximity on the same plant does not necessarily lead to propagation. They aren’t very successful in mating by themselves, and generally need some help from the bees, which carry the pollen from male flowers to the female ones.


Also like papayas, the sexuality of cantaloupes is affected by climatic conditions – high temperatures can cause plants to become homosexual, producing only male flowers, and therefore no baby melons. Fortunately our brood had cool, wet weather and the ornamental flowers we planted had drawn plenty of helpful bees into the neighborhood.


Though I had never seen cantaloupes growing before, I learned that they have a long and illustrious history. The name is French, but comes from the Italian town of Cantalupo near Rome, a former summer estate for the Popes where the melons were first grown in Europe. The melons probably originally came from Persia. Certainly they were around in Biblical times, because when Moses led his people out of Egypt into the desert, they reportedly pined after the mouth-watering melons they had enjoyed during their years in bondage.


What we call cantaloupes were probably introduced to the ‘New World’ by Columbus, planted in Haiti during his second voyage. They are different from the smaller, harder ones currently found in Europe, and are actually a type of ‘muskmelon’, though they smell sweet to me, not musky at all. The ones grown commercially in the United States have been specially bred for sweetness, and are known as ‘Netted Gems’, since they have raised veins on their skins that make them look like they have been caught in a fishnet.


Just before Christmas, my husband couldn’t resist picking one of the cantaloupes that looked big enough to eat. Despite its size, it obviously wasn’t ripe yet because when we tasted it, it wasn’t sweet at all. After that we learned that you are supposed to leave them on the vine until the skin under the netting is completely sandy colored rather than green, and the fruit easily comes loose from the stem.


Unlike some other fruits, cantaloupes will not ripen more or become sweeter after they are picked, so they need to stay on the stem until they reach their peak sugar content – about five percent sugar. When the melon is ready, a buffer forms between the stem and the fruit, preventing more nutrients from passing through, and the fruit disconnects easily.


Besides sugar and water, cantaloupes also contain lots of vitamins, cancer-fighting anti-oxidants, and potassium, which lowers your blood pressure. Still, the best part for us city-born folk is the simple gift of eating something that grew in our own yard, knowing that its seeds have been passed down through generations and traveled across continents, connecting us with ancient ancestors and the miraculous fullness of life.