Bats in Our Ancestry 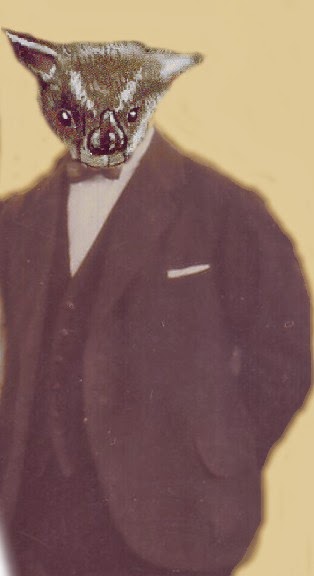 Most of us think that some of our relatives are a little bit batty, but now it seems there might be some literal truth to that idea. Scientists mapping human DNA have discovered that our genetic material is remarkably similar to other animals - and not just other primates. Worms, even. Maybe that is not so remarkable considering how we sometimes behave. However, unlike those who feel that Darwin’s theory of evolution demeans their unique God-given human qualities, I feel enriched by knowing that each cell in my body carries fundamental links with other life forms.

Naturally, then, I was intrigued by a recent article in The New York Times entitled “When Bats and Humans Were One and the Same.” It described research at the University of California in Santa Cruz designed to reconstruct the genetic code for a tiny shrew-like animal which lived 80 million years ago and is believed to be the common ancestor of human beings as well as bats and various other mammals. Through computer analysis of the similarities and differences among modern day people and animals, the scientists hope to identify this original ancestor’s genetic composition and trace the ways it mutated to produce different evolutionary branches.
We in the ‘me’ generation do not tend to venerate our ancestors, but when I was volunteering at the Cinnamon Bay archaeological dig I heard a lot about ancestor worship among the Taino, who were the original settlers on St. John. Bats, which were the only mammals indigenous to the islands, were viewed as physical manifestations of dead tribal ancestors, connecting the natural world of the living with the realm of the supernatural.
At the time, I thought the Taino bat imagery was just based on the spooky way they fly around at night when you can’t see them. You know they are there when you can feel the air moving as they fly by, or you hear them squeaking and rustling in the dark. Certainly the Taino were not the only people who associated bats with ghosts, or the ‘undead’. But maybe the Taino sensed intuitively that the bats actually were their closest relations in the islands, linked by common genetic bonds going back millions of years. Bat-like images in cave petroglyphs and pictographs suggest that the Taino saw a remote kinship between bats and early people living in caves.
In his report on the findings at the Cinnamon Bay dig, National Park archaeologist Ken Wild indicated that over a period of 500-600 years Taino culture evolved from a simple communal culture to a more complex hierarchical structure. Over time, communicating with the spirits of the ancestors became a selective rather than a commonly practiced activity. In later years, bat imagery in religious symbols or ‘zemis’ was used to legitimate the power of elite leaders. Through offerings and rituals (often involving purging by vomiting and ingestion of hallucinogenic substances to achieve trance-like states), chiefs and priests purportedly obtained advice about politics, war, harvests and weather from the bat-faced ancestral deities.
European Christians, however, associated bats with satanic powers and witchcraft. The Spanish invaders, with their Catholic missionary zeal, sought to save the Taino from their pagan ancestor worship, though few survived long enough to actually enjoy the benefits of conversion, at least in this world. More recently, evolutionary theory has also been viewed as heretical, in part because it undermines the concept of human beings made in God’s image, as distinct from the ‘lower’ animals. We know now, however, that animals are not merely machines, as Descartes thought, but only slightly different in their genetic structure from ourselves.
Even though bats may not actually represent the souls of our ancestors, maybe we should think about them as wild and crazy cousins who took a slightly different evolutionary turn. If we view them in that light, we may find that they in fact have insights to offer us about living together in peace, dealing with the weather and improving harvests. If only we could learn how to communicate with them better.
Posted by Gail Karlsson