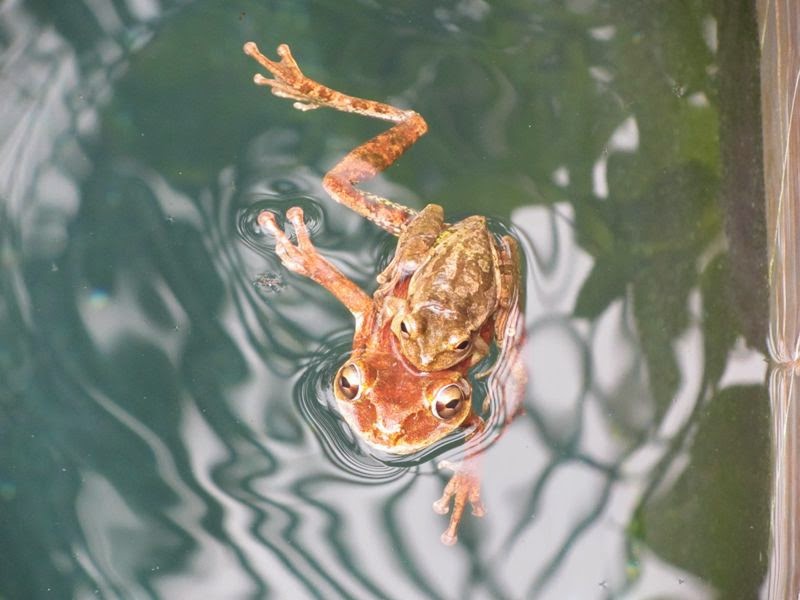 We had some friends over for dinner and my husband brought out some of his more obscure Bob Dylan music. At one point the conversation stopped and I realized we were listening to Froggy Goes A-Courtin’. I don’t think I had heard that tune since kindergarten. Could Dylan really be singing that?


Not only did Dylan sing the frog song, he also talked about it – noting that various forms of the story about Froggy and Miss Mousie (the sweetheart he was courting) dated back to 16th century Scotland. It gained some political significance when Queen Elizabeth I was known to call her courtiers animal nicknames, and her subjects began referring to her French suitor, the Duc d'Alencon, as ‘froggy’.


I wouldn’t have given the song another thought, except for an instance of the principle of synchronicity. That very night it rained hard as we were going to bed and the frogs outside went crazy, honking and bellowing, singing their own raspy-voiced songs, and carousing around our pool.


In the morning one couple was still in the pool, locked in a lop-sided, four-eyed embrace, the little guy on top, surrounded by glittering eggs.


When we built our new house near Fish Bay, the real estate people said we really should put in a pool because without one we would have a harder time selling or renting it. I was dubious because I didn’t want the trouble of maintaining the pool equipment since everything corrodes in the salty, humid air. And who comes to St. John to swim in a pool anyway? That’s what those white beaches are for. But my husband thought it was a good idea, and might have some romantic possibilities. Little did he know….


Since our place is pretty rustic, we didn’t think a bright turquoise pool was appropriate. Instead we designed one inspired by the pool by the petroglyphs, with a dark surface, surrounded by stone. We didn’t realize that we would be attracting wandering frogs rather than tourists.


St. John has cute native tree frogs known for their nighttime calls, especially the two-note whistle of the Eleutherodactylus coqui. These frogs are very small and the females lay their eggs in bromeliad plants, which hang off the trees and have cups at their centers that catch small amounts of rainwater. The frog babies don’t go through a tadpole stage, so there’s no need for a lot of water. Those guys would never want to go party in our pool.


No, the big carousers come from Cuba, and are known formally as Osteopilus septentrionalis, (loosely translated from the Latin as ‘northern boneheads’). They started arriving in the 1970s, probably riding over in potted plants. The Cuban frogs have a very bad reputation. They are invasive, eating just about anything they can fit in their big mouths, including native frogs, lizards, and baby birds. If you touch them, they secrete mucous that can irritate your skin, so most people refer to them as ‘Cuban toxic frogs’. They probably don’t really poison the cistern water if they get in there, but that is definitely gross. Plus they can jam themselves into crevices and clog the pipes.


We usually have a few fat Cuban frogs living at the back of the house. They like to be off the ground during the day, so they climb up and squeeze into the spaces at the top of the window slats and sleep there instead of in a tree. At night they hop down and hunt, or whatever.


On nights when it rains hard, the males get all riled up. Since the eggs have to be laid in water, heavy rain is nature’s signal that the time is right to breed. They would generally use a natural pond, or even a flooded ditch or wetland, but I guess our pool looks pretty good to them. The males gather round the water source and form a chorus. Their loud calls have been variously described as like a barking dog, a squeaking door or a snoring rasp. They use the vocal sacs under their chins to make these sounds, and try to impress the females by how loud and deep their voices are, demonstrating their virility.


(People living on St. John will be surprised to learn that there is an active trade in Cuban tree frogs as pets. Really. They come with a warning, though, that the males are noisy at night so don’t keep them in the bedroom, unless you like that sort of thing. Also, it’s not so good to pat them, because of that mucous issue.)


The Cuban frogs are known as ‘explosive breeders’. Once the females come around, the acoustic competition degenerates into ‘scramble searching’ for mates – sort of like musical chairs when the playing stops.


I was reading about the mating habits of lobsters during my summer vacation in Maine. Like many species, lobsters have a strict dominance system. Only the largest, most aggressive male gets to mate, and he is always bullying the other lobsters – male and female – to prove that he’s still number one. The frogs aren’t so interested in male dominance, and the females aren’t very selective. Most of the males get a partner during the one-night breeding events, and if not, there will be another party soon. Cuban tree frogs can breed any time the conditions are right, and don’t have any parenting responsibilities.


The females tend to be bigger than the males – up to about six inches long. They produce hundreds of eggs at once, since so few of the eggs survive to maturity, and can lay thousands of them over the course of a year. Large females produce more eggs that the small ones – but they don’t need a very big male to fertilize them all. Most any size guy will do, so the males don’t have to wait until they are big and strong enough to fight with competitors to get a chance to mate.


The male basically sits on her back and grabs on with raspy nuptial pads (like velcro) on his front feet. Over the course of the night, as she pushes out the eggs into the water, he fertilizes them. The eggs hatch in a little over a day, and grow into tadpoles. With luck, within a month they are a new batch of frogs.


The Cuban frogs don’t mind if the water is somewhat salty, as long as it is still. But a chlorinated pool isn’t really a good choice. Especially when there is someone who comes by in the morning and scoops out the eggs with a strainer. Yuck.


Meanwhile, I was inspired to write my own island-style lyrics for Froggy Goes A-Courtin. Since it is such an old ballad, there are a lot of different versions, and I thought I would adapt it.
Froggy Went A-Courtin’ - Cuban Style


Froggy found a big gal to be his date, uh-huh
Froggy found someone who could carry his weight, uh-huh
He grabbed her belly with his nuptial pads
And gave her eggs everything he had, uh-huh, uh-huh


Froggy went a-courtin’ outside our house, uh-huh
Froggy wasn’t looking to marry no mouse, uh-uh
His whopping big mama took him for a ride
And kept him going until he cried, no mas, no mas, uh-huh


Froggy wasn’t gone by the morning light, uh-uh
Froggy held her close all through the night, uh-huh
The scientists would say that it’s called amplexus,
When he’s wrapped around her solar plexus, uh-huh, uh-huh


Froggy and his lady left eggs in the pool, uh-huh
That’s not too smart as a general rule, uh-uh
There’s chlorine in there to kill the algae
So Froggy’s poor spawn they never shall be, tadpoles, uh-uh. 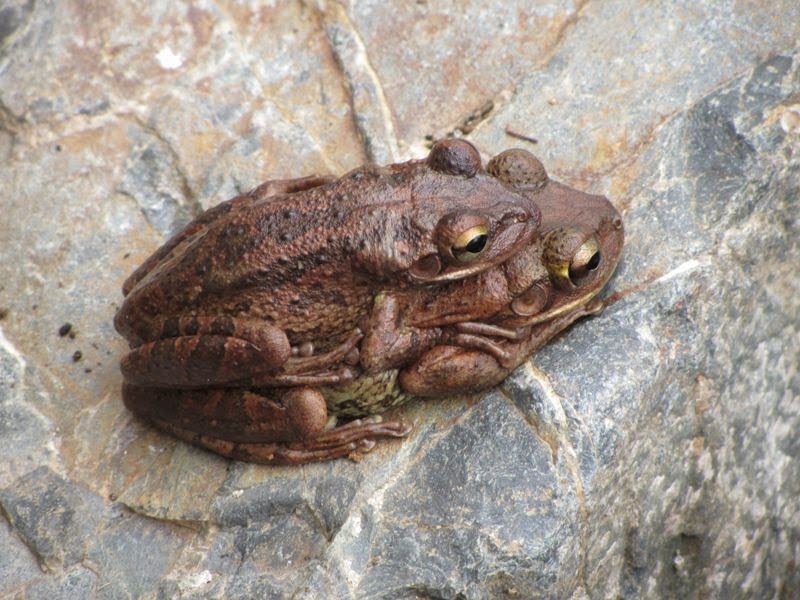