At the Base of the Baobab Tree 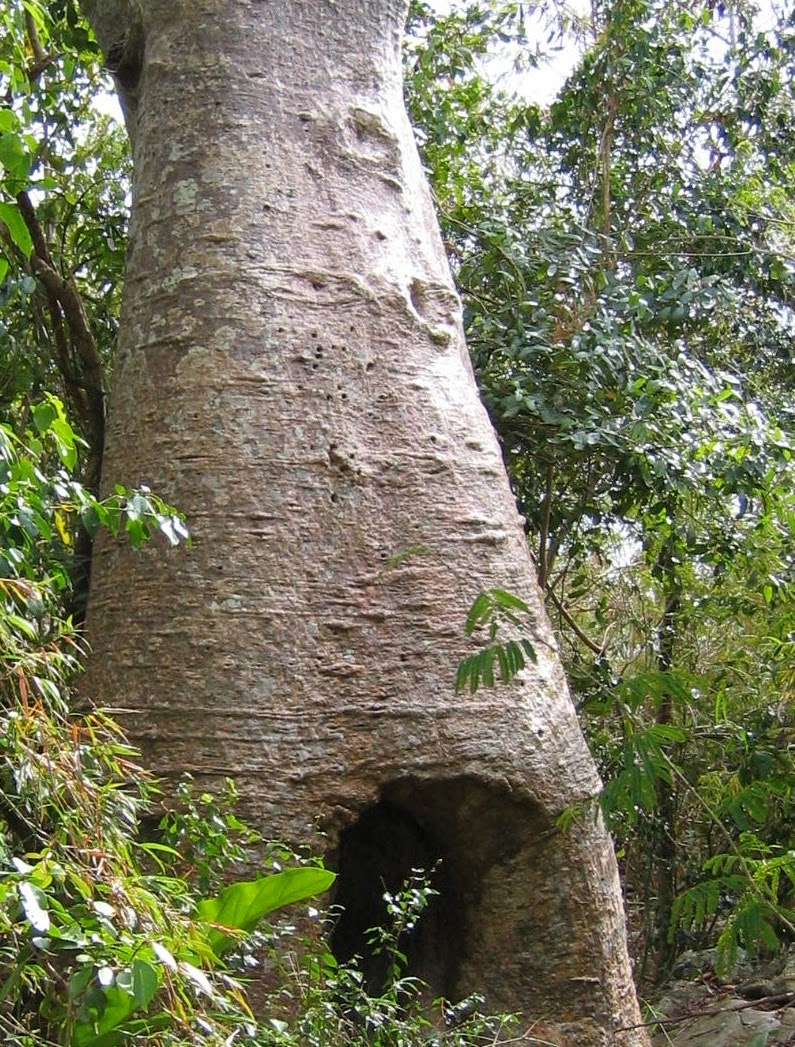 In pictures the dark space in the trunk of the baobab tree looks like a small doorway, or a fireplace set into a chimney. Up close, it looks like there was an entry hole once but the bark grew back and covered it over, leaving a shallow indentation with bark stretched over it the way scar tissue grows to fill in a wound.
Some people think the tree is haunted. The space certainly seems big enough for a person to creep inside and close up the magic door, so surely a spirit could enter it. I didn’t dare touch it, even though I don’t usually hesitate to feel the bark of strange trees. This one seemed to warn me to stand back.
I had heard about the one baobab tree on St. John, and even set out to look for it recently, down the L’Esperance trail, but without any clear idea of where to find it. This time I came at it from a different direction, after the Island Resources Foundation researchers said they had been looking for bats near there. I stayed up late one moonlit night and met them in Fish Bay to see what bats they had caught in their nets. They showed me a pregnant female and I touched her silky wing before they weighed her and let her fly off again. And they told me about the trail to the baobab and the ruins.
Walking up there with a friend on a bright afternoon it was hard to imagine someone choosing to hike along that trail at night. It wasn’t hard going, but narrow, with a steep drop-off to the side in some places. Not a good place to stumble in the dark. Before long we came to the ruins, which looked like the sort of place bats might like, but we didn’t see any big trees. Most of them seemed relatively small and young, filling in the spaces around the old buildings.
Soon we heard voices – not ghosts from the past as it turned out, but a couple from California who had hiked up the L’Esperance trail from Reef Bay. And right in their guidebook was a picture of the baobab tree we were looking for, so we weren’t exactly in uncharted territory. Thinking it must be close by, we backtracked through the area around the ruins looking up for the branches of a big tree.
When we finally found the baobab there wasn’t any tall crown or dense foliage, just a fat tree in among the skinny ones. It is the size and shape of the trunk that makes it unusual and, of course, that dark doorway at the base of the tree.
Baobab trees tend to have a sort of bottle shape, round and stubby in proportion to their height, with no low branches. The ones in the Caribbean are native to Africa. Their bark is smooth looking and soft, and the trees can hold large amounts of water in their pulpy tissues during dry periods. Because of this they are called the ‘tree of life’ in Africa  (remember The Lion King?) and are said to be able to live for thousands of years. Over time, decay and fungus can hollow their trunks, creating internal spaces that people have used for shelter, hiding places, burials, altars, and jails.
I read that sometimes people hollowed out these spaces themselves. They would carve a hole in the trunk to make a door, remove the soft, pulpy tissue, and then light a fire inside to dry out the space. Eventually, the bark would grow over the internal surface of the tree to form a solid inside wall, and the tree would live on unharmed.
Baobab trees were first brought to the Caribbean in the early 1700s from Guinea, in Africa. Robert Nichols, in his book Remarkable Big Trees of the US Virgin Islands, reports that the large baobab at Estate Grove Place in St. Croix is 53 feet high, with a trunk 53 feet around. That tree has a huge hole in the trunk where people are said to have taken shelter from hurricanes and even given birth to babies.
Nichols’ book highlights the connections between African beliefs about trees and the traditions and folklore of the Caribbean. In Senegal, baobab trees are thought to hold ancestral spirits that guard the people living nearby. And in the Virgin Islands, older people told Nichols that jumbies or spirits love to hide in baobab trees. One woman in St. Croix told him that as a child she heard if she went to the baobab tree during a full moon the hole would open up and she would be transported back to Africa.
So maybe there really was a doorway cut into the St. John baobab tree at one time, and then eventually the tree grew back and covered it over. Maybe it really does contain a magical passageway to another world. I just hope that the spirits forces in the St. John tree are protective rather than threatening. I am careful to treat their tree with proper respect.
Posted by Gail Karlsson