As visitors clear out of the Virgin Islands, many birds are beginning to move on as well. They are not worrying about their health, but are heading towards their regular breeding grounds in the northeast United States and Canada.

The most common types of warblers regularly spending the winter here are the Northern Parula, the American Redstart, and the Black-and-white Warbler. They generally begin to arrive in September and are gone by April.

You probably won’t miss the wintering warblers after they go because they are very difficult to see even when they are here. They are quite small (about the size of a bananaquit or a bit less) and tend to stay hidden in the forest.

Also they don’t sing in the winter because they don’t breed here. Most bird songs are produced by males as they advertise their availability to females for mating, and at the same time try to keep other males out of their territory.

Here in the Virgin Islands you might hear faint ‘chip’ sounds in a tree as warblers call to each other, and if you have a lot of time and patience, the birds might eventually show themselves. Bananaquits sometimes make ‘chip’ sounds too, which can be confusing, but the warblers are generally quieter and more secretive.

If you are looking for warblers, it is also helpful to know that they have different bug-hunting strategies.

I have watched Northern Parulas quietly creeping around the tops of trees in the early morning, when the sun begins to warm the leaves, picking off insects as they wake up.

American Redstarts are more noticeable as they hop around in the tree branches, flapping their bright tails and wing feathers to scare up insects.

Black-and-white Warblers methodically crawl up tree trunks and branches, carefully digging into the bark for grubs and other bugs.

For a long time I didn’t really look for warblers because it just seemed too hard. Then last year I had an opportunity to go along on a warbler identification mission with an expert, David Ewert from the American Bird Conservancy in Virginia, who could recognize different warblers just by listening to slight differences in their ‘chip’ sounds. I was impressed.

In January 2019, Ewert was in St. John with his colleague Robert Askins from Connecticut College doing an assessment of changes in the warbler population after Hurricanes Irma and Maria. Previously, Ewert and Askins had studied birds on St. John every couple of years between 1987 and 1997. After Hurricane Hugo in 1989, they observed that the estimated population densities of many species declined significantly, particularly among birds that depend on fruit or nectar.

In 2019, Ewert and Askins received a grant from the Friends of the VI National Park to return and compare the number of forest birds on St. John with their earlier records at the same survey points. They reported that warblers were still coming to winter on St. John despite the damage to forests from Hurricanes Irma and Maria. Since these warblers mostly eat insects, they were not directly impacted by the loss of flowers and fruits after the storms, unlike the resident pigeons, doves and hummingbirds. The number of Black-and-white Warblers was down though. Since they mostly forage on the thick branches and trunks of live trees, they may have found the forests less hospitable after the 2017 storms.

My experience on the trail with Ewert encouraged me to pay more attention to warblers.  Even though I have not yet learned to identify them by the sound of their ‘chips’, I have become more patient about listening, waiting and looking. As a result, I discovered that some warblers actually spent the winter near my house, especially Northern Parulas. I have been happy for their company, and will miss them after they move north.

Meanwhile there are Yellow Warblers that live here all year and breed here. I can hear them singing their song, which is commonly interpreted by birders as “Sweet, sweet, sweet, I’m so sweet”.  A joyful sound in these troubled times. 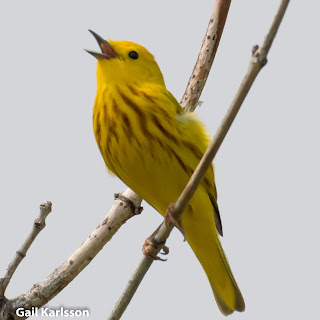