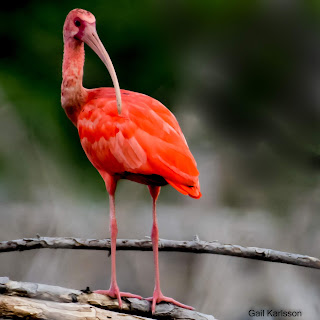 In late October, Dav Worthington at the Virgin Islands National Park posted a cell phone photo of the red mangrove area near St. John’s Annaberg plantation ruins. In the center of the picture there were two blurry white blobs, and next to them a pink blob that he said was a scarlet ibis.

Almost immediately afterwards I heard from Laurel Brannick, the VI National Park Ranger who leads weekly bird walks on St. John. I agreed to pick her up early the next morning – with my telephoto lens – so we could look for the scarlet ibis. I had never seen one before.

Laurel and I did spot the ibis that morning. It was pretty far off, standing on the shoreline across the bay with a small flock of great and snowy egrets. Even at a distance it was remarkable – so shockingly pink, with some orange, not exactly scarlet.

How did it get there we wondered.

Though October often brings in unusual birds moving to or through the Virgin Islands, a scarlet ibis is not the usual migrant moving south for the winter. It is a tropical bird, native to the northern coast of South America and the nearby islands of Trinidad and Tobago. However, these birds do migrate some distance north during fall and winter, generally from flooded grasslands in South American to the nearby islands of Trinidad and Tobago, where they roost and feed among the mangroves.

The most likely possibility is that our bird flew over from Necker Island in the British Virgin Islands, which is owned by the British investor Sir Richard Branson. He has been working on developing a flock of flamingos there, along with some scarlet ibises. The Necker Island birds are not banded or confined, so they can move around if they want to without being tracked.

The Necker Island website says the birds are being reintroduced. Are, or were, scarlet ibises native?

I could not find any historical reports of scarlet ibises living naturally in the Virgin Islands.

In 1767, when C. G. A. Oldendorp traveled to the West Indies as a representative of the Moravian church, he observed that flamingos were plentiful along the shorelines and inland on the north side of St. Thomas. His book, A Caribbean Mission, also noted that “the flesh of this bird is very good-tasting” – unfortunately for them. Most of them probably were in fact eaten, except the ones that were able to take refuge on Anegada.

Oldendorp did not mention seeing any scarlet ibis, though. Maybe he mostly saw the flocks of birds from a distance and couldn’t clearly distinguish the ibises from the flamingos. Or maybe ibises came later. They could have been intentionally brought to the Virgin Islands because of their beautiful plumage – or because they, too, are tasty birds. 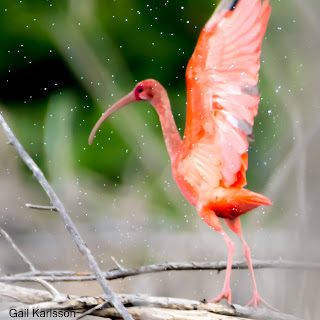 In Trinidad and Tobago, where the scarlet ibis is the national bird, eco-tourists flock to see thousands of them roosting in the Caroni Swamp. Yet, I found a September 2017 article by Jessica Rozek on the BirdsCaribbean.org website with the title Scarlet Ibis: A National Symbol Under Siege.  Despite its protected status, the scarlet ibis is “a black market delicacy illegally served at elite parties”. Eating the national bird seems to have become a status symbol, condoned by some due to its historical status as a game bird.

Native or not, there hadn’t been any scarlet ibises reported in the Virgin Islands for a long time before Branson brought in the Necker Island birds, so the simplest explanation is that a few of them are exploring the other islands in the neighborhood. It turns out that one was sighted in 2018 over in Culebra, on the east side of Puerto Rico. Another has been reported recently on Jost van Dyke, and based on the photo I saw it does not seem to be the same bird as the St. John one, though it is hard to be sure.

Still, I couldn’t help wondering if it was possible for a wild scarlet ibis to show up in the Virgin Islands on its own – as a so-called vagrant?

I asked Richard Veit, a professor at the City University of New York, College of Staten Island, who has studied birds on St. John for many years. He told me that although scarlet ibises mostly move to Trinidad and Tobago in the fall and winter, over the years a number of vagrants have reached the West Indies. “How many is an open question since many are suspected of being ‘escapees’, although I am sure this suspicion is exaggerated. (There is a much higher tendency to call a wild bird an escapee than the other way around).”

Through developments in satellite tracking, radar, and organized citizen science reporting around the world, a great deal of new information about the movements of birds is now becoming available. Professor Veit observed that birds tend to ‘wander’ more than was previously thought, dispersing over long distances and exploring different areas. This exploration will be important for birds’ survival as the world’s climate changes, and birds are able to adapt, or not, to new conditions.

So not impossible that it was a wild bird that came up from the south.

Alternatively, could it have come from the west?

The famous bird observer John J. Audubon did include the scarlet ibis in his Birds of America, after seeing three of them along the coast of Louisiana in July 1821. But he referred to them as ‘accidental’ and declared that these birds were not common in the southern parts of the United States, as others had claimed, unlike the abundant white ibis.

The iBird Pro birding app on my phone showed the year-round range of the scarlet ibis extending from southern Florida all the way over to the Dominican Republic. However, I did not find any postings of a scarlet ibis in that area on the citizen science eBird site (which was set up in 2002). Historically, there have been scarlet ibises imported into Florida, so any seen in the northwestern Caribbean were probably thought to be escapees from there – but again, there could be ‘accidental’ wanderers.

Blown here by a storm?

Not likely according to Professor Veit. “We need to extinguish the notion that a bird in a new place is a mistake of some sort – like being blown by a storm.” Ibises are strong flyers, and other sea birds fitted out with satellite trackers have flown directly through hurricanes and emerging unharmed on the other side. For the most part, too, birds try to hunker down and take shelter during storms.

A 1960 short story called The Scarlet Ibis by James Hurst is not about birds, but does feature a scarlet ibis that has been blown into a family’s yard by a hurricane – probably into the North Carolina area where the author is from. Sadly, the family in the story viewed the sudden appearance of the rare, blood-red bird as an omen of death.

Personally, I view the scarlet ibis on St. John as a blessing, whether it is a natural wanderer or a drifter from an introduced flock. It provides an unusually vibrant spot of life in a tangle of gray mangrove stumps left by Hurricane Irma. It is even becoming a celebrity, something to seek out, almost like the famous escaped mandarin duck, which recently turned thousands of New Yorkers into exotic bird gawkers.

I keep going back to see if it is still there, or to show other people where it usually hangs out. It doesn’t seem to mind the attention. I hope it stays for a while. 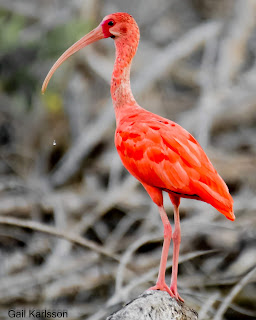