I recently saw a bunch of different butterflies in my yard, flitting around on the tamarind flowers, the bougainvillea, and the pigeon berry tree – one of the joyful aspects of life in the Virgin Islands.

At least I thought they were butterflies, until I found out that some of them were moths.

But wait – don’t moths come out at night, and butterflies during the day? That’s how you know they’re butterflies, right?

Well, it turns out some moths are out during the day along with the butterflies, so now how do you tell the difference?

I learned that one way to tell them apart by sight is that they have different types of antennas.
Butterflies have thin antennas, with tiny clubs on the end. Moths generally have shorter antennas, without clubs, and the males have feathery ones. 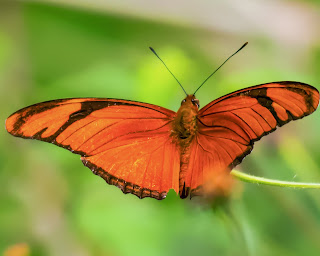 Antennas are very important for both moths and butterflies, as they contain sensors for smelling nectar, identifying pheromones emitted by potential mates, and detecting nutrients in soil. An organ at the base of the antenna also responds to information about its position, helping to control orientation and balance during flight.
Both moths and butterflies also have a long tube-like proboscis that can be extended to suck up liquids, like nectar from flowers. 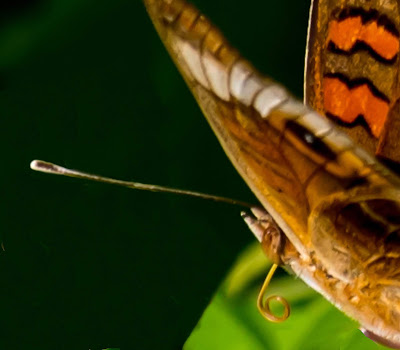 But moths actually came into existence long before butterflies, or flowering plants – over two hundred million years ago. Originally they had mouths made for chewing. Moths may have later developed their proboscises for easier access to food sources like tree sap.

Butterflies eventually evolved from moths. They took advantage of the nectar available from flowers open during the day, producing scents to attract pollinators.

Butterflies are also often brilliantly colored, which makes them more visible to possible mates, while at the same time informing would-be predators that they contain toxic chemicals (obtained from plants consumed when they were in a caterpillar state) and are therefore not good to eat.

However, there are some flowers (like the night-blooming cereus) that open in the evening, because they evolved to attract nocturnal moths.

And, as I learned, a number of moths are colorful daytime feeders.

Certain daytime moths protect themselves from predators by pretending to be dangerous wasps, including the ones in the Virgin Islands that look like Jack Spaniards, which have wicked stingers. 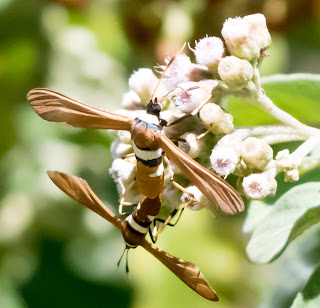 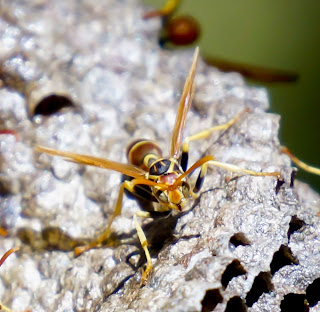 Because many moths are active at night, they do tend to be darker and less colorful than butterflies. Still, some daytime butterflies are also quite dark. 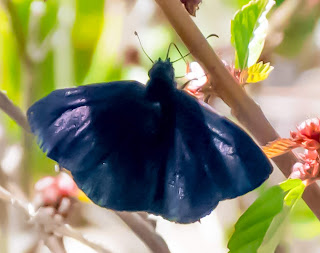 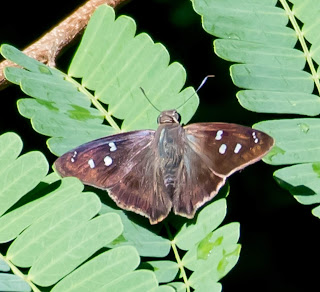 The skipper butterflies, like the Hammock Skipper shown in the photo here, have larger bodies and heads than the other butterflies, which can be confusing because that make them look more like the generally stouter moths. Their antennas are also more like a hook than a club.
Light-colored ones can also be confusing. A few years ago there were a lot of white butterflies that hatched at the same time, which was really fun. Most of them were butterflies called Great Southern Whites, which are distinctive because the clubs on their antennas are light blue. 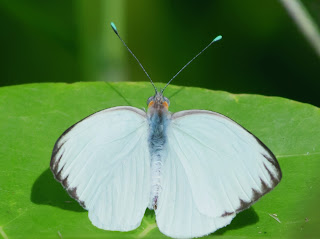 But there were some brilliant white moths out there too. 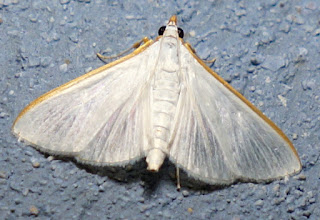 People like to see butterflies because they are beautiful, but they often also take on a more mystical significance as powerful symbols of rebirth and transfiguration, due to their seemingly miraculous physical changes. While most life forms go through quite dramatic changes over the course of their development, few go through such a strange and complete transition from creeping, chewing caterpillars to graceful flying creatures. 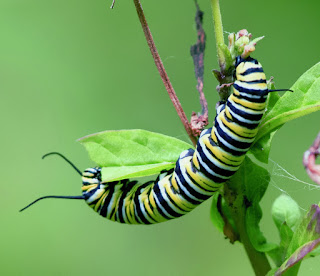 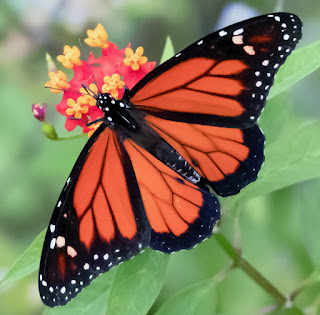 In general moths are not viewed in the same inspirational and uplifting way that butterflies are, despite their many similarities. Maybe that is because of our primitive fears of dark things fluttering around in the night. 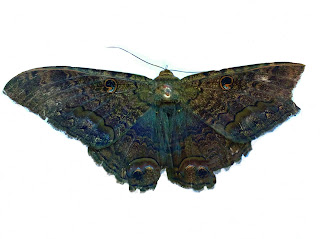 But both moths and butterflies are wondrous in their complex transitions. Even without applying any sort of mystical perspective, learning about butterflies and moths increases our understanding of the amazing variety of life forms around us, connecting us with the eons of natural history and evolution supporting our own development – and potential for transformation.