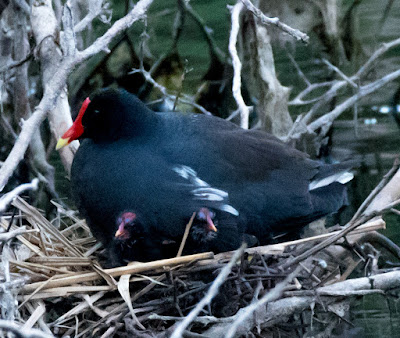 In January I was delighted to find a family of common gallinules in a Fish Bay pond near our house. These birds are commonly called ‘moorhens’ but several years ago were renamed because they have now been designated as a different species than the ‘Old World’ moorhens.  They are year-round residents on St. John.

I first noticed the mother sitting on a rough nest of sticks in a downed tree in the middle of the pond. Then I got excited when I saw that there were several small bald chicks underneath her. For the next few weeks I kept checking on their progress as I passed by on my walks.

These birds had caught my attention in prior years due to their weird red facial shields. (Why the Red Face? https://www.stjohntradewinds.com/connecting-nature-red-face/). 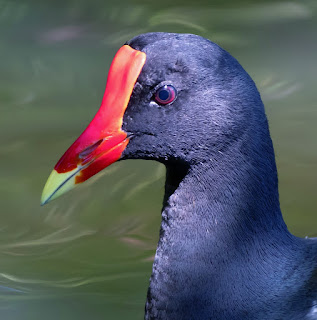 Last year I also witnessed the kidnapping of a baby gallinule by a pearly-eyed thrasher (Drama in the Mangroves  https://www.stjohntradewinds.com/connecting-with-nature-drama-in-the-black-mangroves/).

That first day I did see a couple of thrashers hanging around the pond near the nest, and was concerned that the chicks were in danger. They looked very small and vulnerable, with fuzzy black feathers, and baldish red spots on their heads like targets.

The chicks mostly stayed under their mother, though, while the father seemed to be providing food for the family by diving down and pulling up aquatic plants, then swimming back to the nest. Actually both parents feed the chicks, and they look much the same so it is difficult to tell them apart, except that the male is a bit larger. 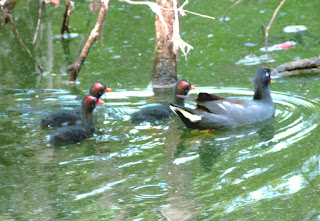 Later on the chicks bravely ventured out into the water near the nest.

One day I found the whole family on the edge of the pond pecking along the ground. The parents seemed to be showing the babies how to find seeds, grasses and insects, though the youngsters looked more interested in getting food from the parents’ mouths. 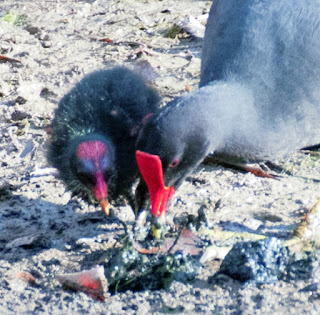 The chicks have tiny wings, but weren’t practicing any flying. The gallinules are mostly found swimming in the water, or walking around on long yellowish legs. They rarely fly at all. 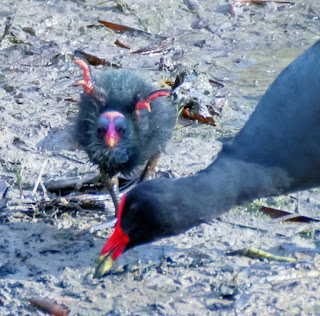 Meanwhile, Elaine Estern let me know there was also a gallinule family in the Frank Bay pond also, so I checked them out too. 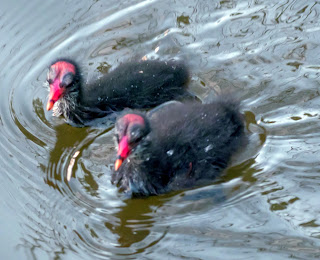 By the middle of February, the young Fish Bay gallinules were no longer black and bald. They were still somewhat fuzzy, but grayish and quite a bit larger. 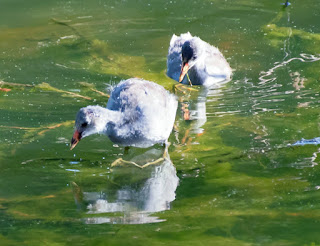 They still tried to get food from their parents, too, even though they were beginning to be able to pull up their own from the bottom of the pond.

Then Laurel Brannick reported another family in the mangrove area near Annaberg, so the gallinules seem to be thriving this year. It is great to see them doing so well.
Posted by Gail Karlsson