Can Stress Lead to Greater Productivity? 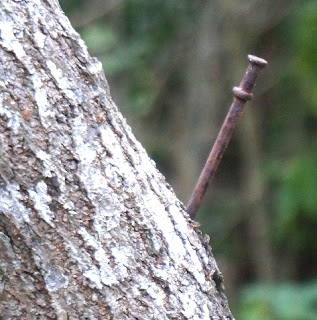 You might think this sort of question is more appropriate for the advice column: “Are you feeling a bit overwhelmed by the busy season on St. John, with too many pickups at the dock, cars in town, visitors on the beaches, fundraiser events, margaritas after work, and dead iguanas on the road? Here are five scientifically-proven tips for raising your mood and energy level…”


But no, bear with me – I am still talking about trees.


A few weeks ago I was invited to an Audubon Society slide show, and while we were chatting I mentioned my work on the Unitarians’ Tree Appreciation project. Our hostess, Cassie Ellis, said she had something interesting to show me, so I followed her out the back and down some steps towards the base of an impressive mango tree. The interesting thing was a large rock wedged in between the trunk and one of the thick lower branches. 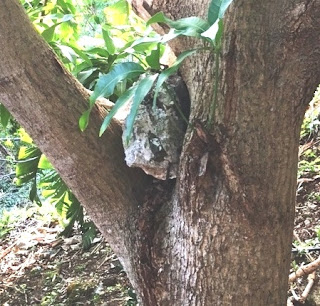 Cassie explained that the mango had grown very large but never had any fruit until a gardener stuck this rock into the crotch of the tree. Then the next year it produced lots of mangos. Had I ever heard of this?

No, I said, but promised to look into it.


For years my husband and I nurtured our own small mango tree. It flowered many times, but its tiny fruits never grew to maturity. The largest one we got was about the size of a marble. We were told it was too young, too dry, too shaded. Or it needed better soil, fertilizer, or spray to kill the white flies. 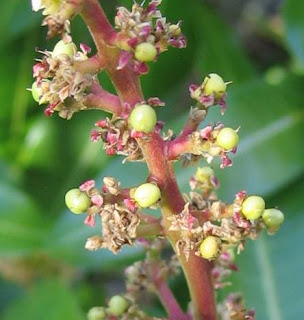 We tried everything we were told, but never got one mango to eat. Then, we came back last fall and were sad to find it had died in the drought.


I asked around about the rock thing, and several people said they didn’t know about that, but they had heard of banging a rusty nail into a tree to make it fruit. One rationale offered was that the tree needs iron from the soil and is not getting enough, so the nail delivers it more directly into its system. Others said this was just superstition, wouldn’t work, and would harm the tree.


On the Internet I read that “mature mango trees need to be stressed to become fruitful”. Maybe that’s what the rock was for? The trees have to make a switch from growing new leaves to producing flowers and fruits. That switch can be triggered by a period of dryness or cool weather, followed by rain. Commercial growers often manipulate irrigation schedules and fertilizer applications to prompt regular fruiting times, alternating with periods of rest and nutrient restoration.


However, I also read about some much wilder ideas for getting a tree to flower and fruit – like hitting it with a chain or a baseball bat, partially girdling it, stretching the branches, and making a smoky fire underneath it. This seemed like some pretty dark stuff. Not the sort of thing the Unitarian Tree Appreciation Project would endorse. 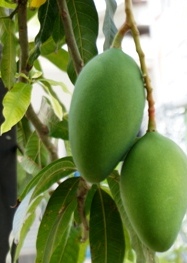 I imagined that most of the mature mango trees on St. John were managing to produce fruit without any major intervention. But what did I know. Once I started looking more carefully I noticed a number of other trees with strategically placed rocks or nails in them. 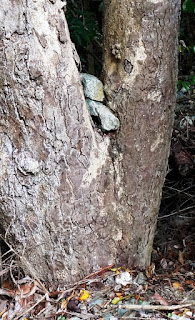 Clearly some people believed these measures would help, and the trees weren’t obviously damaged as a result. I started thinking that maybe instead if coddling our mango tree we should have given it a beating to make it produce. Or at least put a rock in it to help it hold the fruit.