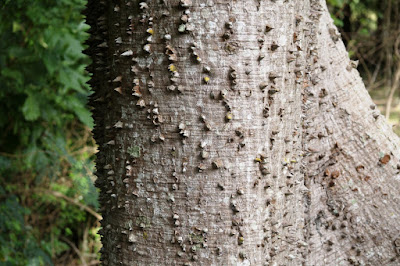 People like to say ‘monkey-no-climb’ because it’s such a fun name. All trees on St. John with big thorns on their trunks tend to get thrown into that category, even though there are no monkeys here.


Iguana-no-climb would make more sense as a name, since those guys seem to be climbing around everywhere. There must be some types of thorns that will deter even an iguana, despite its leathery skin and sharp claws.


I have been walking around in the woods recently to learn more about the different types of local trees - as part of the Unitarian Universalist Fellowship’s Tree Appreciation Project. I can tell you it’s really creepy when you are peering up at the top of the tree trying to see what the leaves look like and a dark blob of iguana gets nervous and drops down almost of top of you. 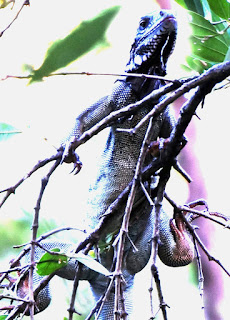 Thorns, like claws, are a sign of power, warning you to keep your distance. They likely evolved over millions of years to provide immobile trees with defenses against large grazing animals, as well as smaller ones that might want to eat their leaves and flowers. Animals that eat the fruits, like monkeys, can actually help a tree propagate by spreading its seeds widely, though maybe the tree would prefer to have them wait until the fruit falls onto the ground.


While being careful not to get impaled during my excursions, I have identified a few different types of large trees with thorns that people might call ‘monkey-no-climb’: 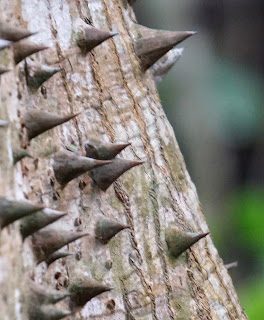 
This tree is distinctive because in addition to its thorns it has impressive (sometimes huge) buttress roots as it grows older. When it flowers, it produces a soft fluffy fiber in its seed pods, which was once used as the stuffing for mattresses, and later life jackets. The flowers are smelly and open at night to attract bats as pollinators. (For the pre-Columbian Taino people, bats were associated with the spirits of the dead, so these trees were treated with great respect.) This is the most easily visible of the thorny trees - you can see examples by the road at the entrance to Caneel Bay, by the water sports shack at Cinnamon Bay, and on the Reef Bay trail. 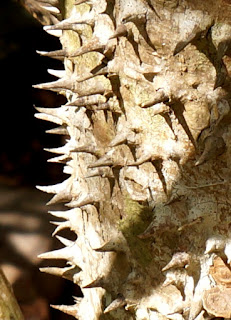 
This tree is native to tropical areas of North and South America as well as the Caribbean. The ‘sandbox’ name refers to its tangerine-shaped seed capsules, which were valued in colonial times as exotic boxes for holding the sand that people used to blot the ink when they wrote letters. Despite this ‘civilized’ Victorian image, these trees tend to be hidden in forested areas on St. John and are generally not very friendly. The capsules explode loudly when they are ripe and shoot out the seeds like shrapnel – reportedly up to 300 feet at 150 miles per hour. Besides having a thick layer of sharp thorns, they also have toxic sap that was used in pre-colonial times for poisoning arrows – and later for making tear gas. 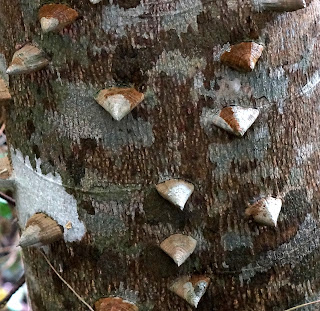 
Native to the Caribbean and northern South America, this tree seems to thrive in higher elevations, and quickly grows very tall when it gets enough light. The thorns are largest at the base of the tree, where a grazing animal would make contact, and become smaller and sparser further up. But interestingly, it also has small thorns on the backs of its leaves that could deter upper level browsers. You can see one along the John Head Road past the Catherineberg ruins, on the right in a small turnout as you drive towards Cinnamon Bay. 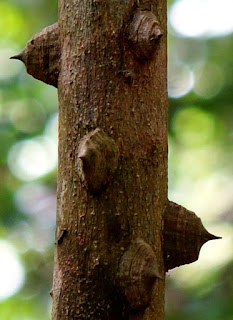 
I only recently noticed a few of these trees, in the low-lying Fish Bay conservation land. They do not seem to have thrived there, maybe because they have gotten flooded with salty water. They are generally smaller than the related white prickles. According to Eleanor Gibney, the wood is a very attractive yellow, and the roots were formerly used to make a yellow dye. She also noted that researchers have isolated antibiotic compounds from the thorny wood. Trees protect themselves with chemicals as well as thorns, and in earlier times this one’s bark was used to treat people with colds, and as an aesthetic.