From Frangipani Caterpillar to Pseudosphinx Moth 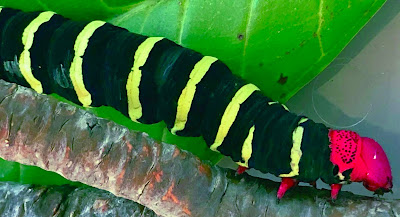 
Last year I wrote about the lifecycle of St John’s monarchs – from caterpillars to chrysalises to marvelous butterflies. Though of course I had read about this multi-phase transformation, somehow I had missed witnessing it before. I was amazed.


But somehow I was less excited when my husband suggested it would be fun for me to capture some frangipani caterpillars and see what they turn into.


Usually the big striped caterpillars just seem to disappear once when they are done eating all the leaves off your frangipani tree. I knew that eventually the frangipani caterpillars turned into big gray furry moths. I had seen a couple. Not very attractive compared with the delicate fluttery monarchs.


No one I knew had actually seen their interim stage of development. Reportedly in their pupa stage they lie on the ground and look like dead leaves. No shiny green chrysalis hanging from a branch, decorated with shiny gold dots, like the monarchs.


Anyway, the deer and the storms had already destroyed our frangipani trees.


I didn’t think any more about caterpillars until after just Christmas when I was out walking along the Fish Bay road. I noticed a fairly large frangipani tree with only a few leaves left. It was crawling with caterpillars.

Hmm. Some of those caterpillars were not going to get enough to eat, as there were no other frangipani trees in sight. After only a moment’s hesitation I pulled a plastic bag out of my backpack and grabbed a couple of the leaves along with a few of the larger caterpillars.


My younger son was visiting for the holidays and had been off at Reef Bay teaching his girlfriend how to surf. As it happened they pulled up in the old yellow Jeep just as I was turning onto our road.

I held it open, “Oh, just some caterpillars”.


I got out a plastic crate and some mosquito netting and put the caterpillars inside. By morning the leaves were gone.

Now we needed fresh fodder. My husband and I set out early to discreetly search the neighborhood for frangipani foliage. We found some high up on a hillside and quickly made off with it. The milky sap was dripping from the stem but fortunately I had another handy plastic bag in my backpack to wrap it in.


I thought the largest caterpillar was already fat enough to move on with its journey, but it kept eating constantly for about a week. We had to make a second fodder foray. Then on New Year’s Eve it stopped eating and started roaming around the crate at a fast pace.

I read that the caterpillar would ordinarily move away from the tree and look for a pile of leaves to hide in while it transformed into a pupa and then a moth. I though about providing some cover but then I wouldn’t be able to see what happened.


By New Year’s morning the big caterpillar had stopped roaming and looked dull and shrunken. I was afraid it was dying. I put it on the table to keep an eye on it. Then, it started having contractions that ran from one end to the other. It looked like it might bust open right then – a great way to start the new year!


All day my son and I watched over it, but not much happened. I poked it and it twitched, so I knew it wasn’t dead. By late afternoon I was still thinking it might transform so I took it to a neighbor’s party with me in a little box. No change.

In the morning I found a research paper that mentioned a ‘pre-pupa’ stage that could last several days, so I put it back in the crate and left it alone. I couldn’t watch it all the time.
One morning when I woke up and checked I saw that it just shed its skin and I was disappointed to have missed the transformation. I could tell it had happened recently because the pupa was still soft and yellowish. I saved the cast-off dried up skin. 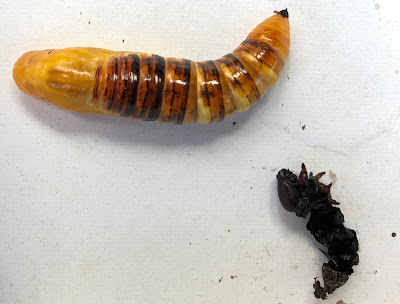 Later it got harder and shell-like, and much darker. You could see where the wings would form.﻿ 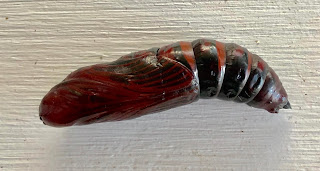 During the pupa stage, the caterpillar body inside the shell is dissolved by enzymes that break down many of the tissues into component cells or clumps of cells that then gradually grow into new moth-body structures. Wow.

The research paper said it would be about 3 weeks before the moth formed and emerged from the pupa. I started checking on it around then but it was a couple of days late. And once again I missed the moment.
One morning I woke up and found the hard shell with just the end popped off and the moth beside it just lying there.
﻿ 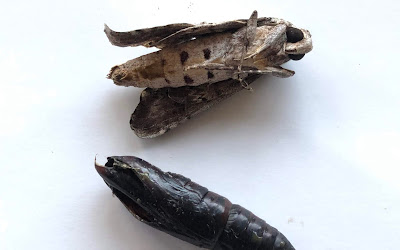 I brought it some bougainvillea flowers so it could eat some nectar and it moved a bit but never got very perky. (At first we went out looking for a frangipani flower but then I remembered that those don’t actually have any nectar. They smell good and fool the moths into poking around in the flower and pollinating it, but the moths have to find food elsewhere.)


At that point I put them all outside. The moths only live about a week or so. After all their complicated and mysterious stages of development, the moths have that very brief time to find a mate, reproduce, get some eggs laid on a frangipani tree, and start the whole cycle all over again.


And we think life is short.
Posted by Gail Karlsson

Some St. John Birds Have Done Better Than Others Since the 2017 Storms

Phyllis Benton’s January 15 report to the VI Audubon Society on the results of St. John’s annual Christmas bird count showed higher numbers for many birds compared to last year. There are plenty of pelicans, egrets, pearly-eyed thrashers and ruddy ducks.


However there are fewer hummingbirds, scaly-naped pigeons, anis, mangrove cuckoos and other birds that eat fruits, nectar and seeds.


Phyllis made a remarkable effort to organize a bird count in December 2017, despite many storm-related obstacles, and managed to pull together a team of 26 counters, who observed about 700 birds. For 2018, there were 35 counters on St. John, and 1100 birds reported.


Fish-eating birds like pelicans had better opportunities to find food after the storms, and could also move to places with better conditions. Some have come back. Only 23 brown pelicans were observed in December 2017, but 128 were reported in the latest count, more than have been seen for several years.


Sightings of snowy egrets (black bills and yellow feet) and great egrets (yellow bills and black feet) have also increased over recent historical levels.
However, some of the brown boobies seem to have gone elsewhere and stayed away. There were 12 in the latest count, only slightly more than the 4 counted after the storms, way down from 59 the year before the storms.

﻿﻿
Pearly-eyed thrashers are aggressive omnivores, feeding on insects, frogs, small crabs, and other birds’ babies, as well as fruits and berries. They are among the most commonly seen birds on St John, and have managed to find enough food sources to remain dominant, though their numbers still are well below historical highs.

The large black smooth-billed anis have diets that are similar to the thrashers, but have not fared as well. Only 14 were reported in 2018, compared to 24 right after the storms, and 35 the year before.

The small Antillean crested hummingbirds seem to be at risk of disappearing. There were 2 reported after the storms, and only 5 a year later, compared to an average of about 25 in prior years. Many probably got blown away or starved due to the loss of vegetation. They mostly feed on nectar from flowering trees and vines, which was no longer available, though they sometimes will eat small bugs.

Green-throated carib hummingbirds seem threatened as well. Only 12 were reported – the same number as after the storms. 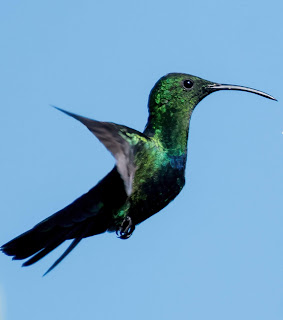 Even fewer of the native yellow warblers were seen – only 3, down from 5 the year before.


The larger bridled quail doves are very scarce, so I was excited to spot one in January along the L’Esperance trail. They mainly eat fruits, flowers and seeds, and did not have a big population to begin with.

Mangrove cuckoos are also very scarce. Though they like fruits and berries, they also eat insects and lizards. They may have suffered losses due to widespread damage in the mangrove areas.


Bananaquit numbers are down by more than half from prior years, but increased from 98 to 127 between December 2017 and 2018. They probably have been helped by the efforts of St. John people to put out sugar for them.

Meanwhile some new species have turned up: a tricolored heron, couple of royal terns, and a troop of brown-throated parakeets (St. Thomas conures) near Mongoose Junction that probably came over from St. Thomas. 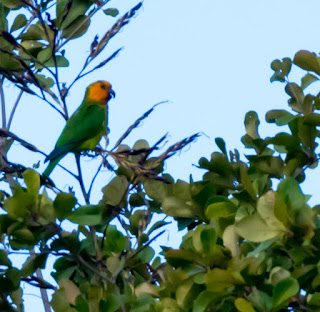 People have also observed the Adelaide’s warblers that moved to Lameshur Bay from St. Thomas, so those recent newcomers have not been lost.
﻿﻿
At the January meeting, the VI Audubon Society also heard a report from Robert Askins, a researcher from Connecticut College, who came to St. John with his colleague David Ewert from Michigan to do an updated field survey of warblers. They had previously studied warblers here starting in 1987, and found a variety of species wintering on St. John, including northern perulas, black and white warblers, redstarts, hooded warblers, and prairie warblers.

In 1991 they published a report on the ‘Impact of Hurricane Hugo on Bird Populations on St. John, U.S. Virgin Island’. Although Hugo did not hit St. John nearly as hard as Irma and Maria,  the scaly-naped pigeons, bananaquits, hummingbirds and other fruit and nectar dependent birds were significantly affected. By 1997, though, their numbers were mostly back up.


Many local birds (and trees and plants) have evolved with hurricanes and are relatively resilient. However, a significant loss of native trees and habitat can affect their ability to recover. Those with small populations to begin with are most at risk.
For some good news – recently there have started to be baby birds around. At Frank Bay, for example, Elaine Estern was watching 12 white-cheeked pintail ducklings, and three baby common moorhens (gallinules). Hope for the future.

While some people are hanging glittering ornaments on pine and fir trees shipped down from the north country, the trees growing here are displaying their own holiday delights.
The local guavaberries near me are just getting ripe. They are used to prepare traditional West Indian treats for Christmas celebrations – including tarts, jam, wine. Also popular rum drinks flavored with mashed up guavaberries, spices and sugar.
Carolers used to travel from house to house spreading holiday cheer and singing the Guavaberry Song: “Good morning, good morning, I’ve come for my guavaberry. Good morning, good morning, to you and all your family.”
The inkberry tree is also associated with traditional holiday celebrations because it was used locally as a Christmas tree. It is a small forest tree, drought and salt tolerant, with a straight trunk and spiny horizontal branches. Its thorns helped hold on candles and other decorations. The berries are white when ripe but can be used to make a purple ink, hence its name. The thin branches were also sometimes used as fishing poles (with the thorns stripped off).
The Christmas palm is not native to the Virgin Islands. It is originally from the Philippines, but has been planted around St. John because of its attractive red fruits. They do look a lot like Christmas ornaments, and many are fully ripe now.
﻿
﻿ 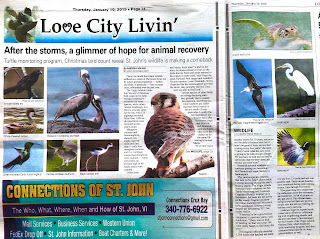