Pigeon Berry - The Nothing Tree 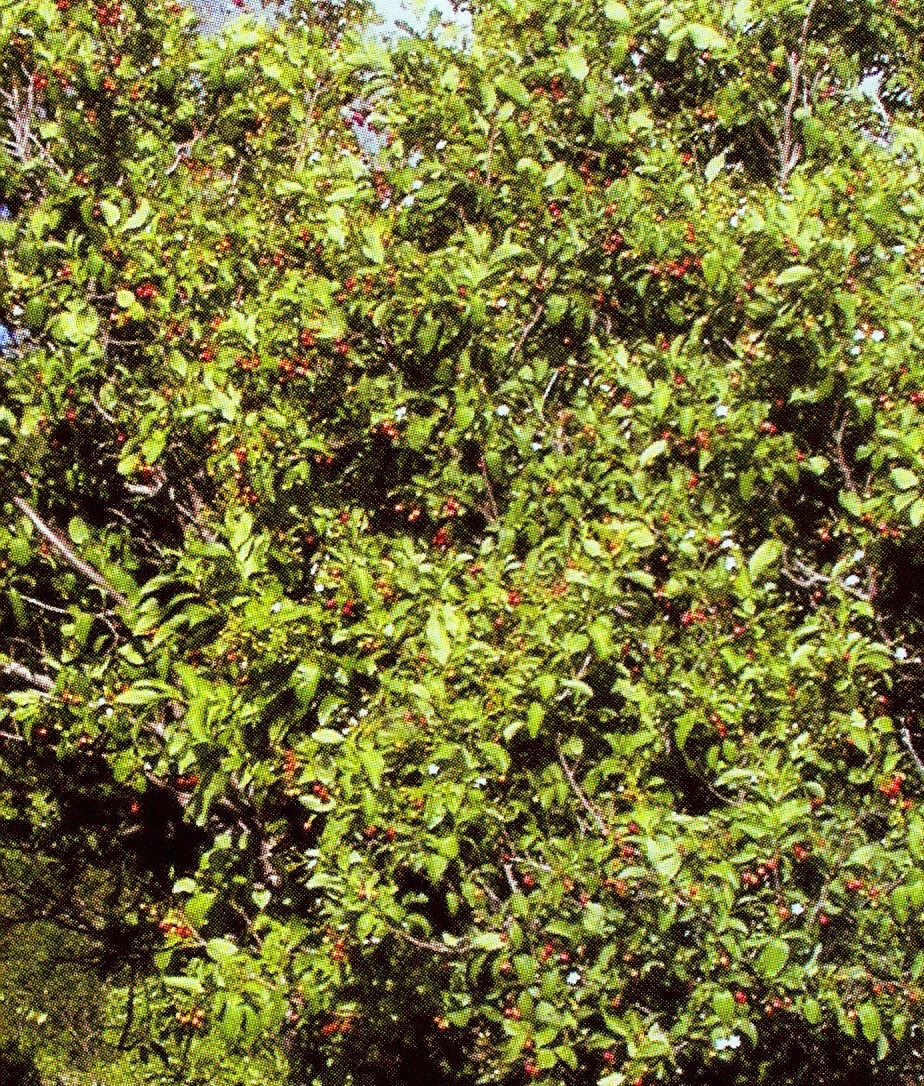 It was there right by the side of the house when we first came to the island. Almost certainly it was growing there before the house was built, because no one would have planted it deliberately. We had come from the city, so we didn’t even really notice it for a long time. It was just some tree. We could recognize a coconut tree, and that was about it.


We did notice the flamboyant trees that someone had planted above the driveway when they suddenly produced flaming orange blossoms that covered the car. We also noticed the frangipani trees when fat, yellow and black caterpillars came and ate all the leaves, and then moved on, leaving us with naked sticks standing up in front of the house. 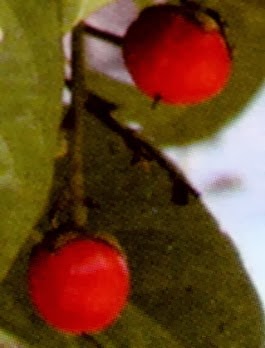 Later we planted bougainvillea, oleander and hibiscus. Just saying those names makes you think of sultry nights, fragrant breezes and tropical romance. The dreams of paradise that lure people to Caribbean islands. Lying in the hammock by the beach, under the palm trees.


We didn’t realize that these trees were not native to the Caribbean – though not such recent arrivals as we were. The hibiscus trees came from China originally, and the oleander was from the Mediterranean. Bougainvillea is named for a French navigator who found the plants growing in Brazil in the 1700s and took some back to Europe. Even the flamboyant was imported; it originally came from Madagascar. It turned out that only the frangipani was actually native to the Caribbean.


When we started out trying to tame the ‘bush’ areas near the house, we quickly learned that the things you want to get rid of the most are the ones that always keep coming back – like the stinging nettles, creeping snake cactus, and vicious, thorny catch-and-keep vines.


Some of the flowers we planted couldn’t keep up with the more strongly rooted local plants we had tried to replace, or were overgrown by the super-aggressive, non-native, false tamarinds that sprout up wherever the land is disturbed. Others fell prey to mealy bugs or fungus, or couldn’t survive the droughts, or the storms. Eventually we only planted cuttings we were given by the neighbors, things that were free and had shown they could thrive without much attention on a steep hillside in dry, rocky soil. Anything that needed water had to go down where the washing machine hose emptied out.


We first really looked at the tree right next to the house when fruit rats started coming in the house. Our neighbors pointed out that there were tree branches touching the roof, so the rats could be climbing up that way and dropping down onto the deck. From there it was an easy sneak into the house. We cut the tree back then, and again later when a storm tangled up the electrical wires running through it to the meter box.


Sometimes there were reddish-orange berries on the tree, and my young sons made up a game out on the steps that involved collecting the berries and stuffing them into a hole in the stone retaining wall. Like pirates hiding treasure, or squirrels maybe, preparing for a hard winter. I worried that the berries might be poisonous. But when I asked what kind of tree it was, I was told “That’s a nothing tree.”


Not dangerous like the oleander. Not glamorous like the flamboyant and bougainvillea. Not bountiful like the papaya and mango trees. Or shady like the palms. Or good for building houses or boats. Just a nothing tree. I began to feel badly for it, not being particularly glamorous or flamboyant myself. There are always others more aggressive, or showy. Is it enough to just take in the sunshine and produce some berries, feed a few birds, and then gradually be absorbed back into the earth so something new can grow? I suppose trees don’t really worry about finding meaning and purpose in their lives, though they definitely do compete intensely to  survive and reproduce.


Later, after watching many of the local trees get bulldozed off the hillsides to make more room for rental homes and exotic vegetation, I learned the names of some of the less familiar trees. Eleanor Gibney’s Field Guide to Native Trees & Plants of East End, St. John, US Virgin Islands identified the nothing tree as a ‘pigeon berry’ – its scientific name Bourreria succulenta. Mostly the tree seemed to attract the noisy ‘thrashees’, who ate the berries and left hard-to-remove purplish droppings on the white railings below.


The most interesting thing I read about the pigeon berry tree was that the leaves used to be soaked in rum to make an aphrodisiac. That doesn’t sound like ‘nothing’. Maybe it could be marketed to a pharmaceutical company and make the tree famous. Happy couples would appear on TV saying “Thanks to the pigeon berry, our marriage was saved.”


There was no recipe given in the book, so I didn’t know if I should I boil the leaves first or dice them up raw. Then, after thinking about it for a while, my enthusiasm for becoming an pharmaceutical entrepreneur subsided. It was easier to just lie on the hammock in the shade. The nothing tree and I might never get to be famous, but at least we could enjoy a peaceful afternoon together, sharing the warmth of the tropics and swaying in the ocean breezes. And what a wonderful aphrodisiac that can be, even without eating any leaves.
Posted by Gail Karlsson

Iguana in the pool 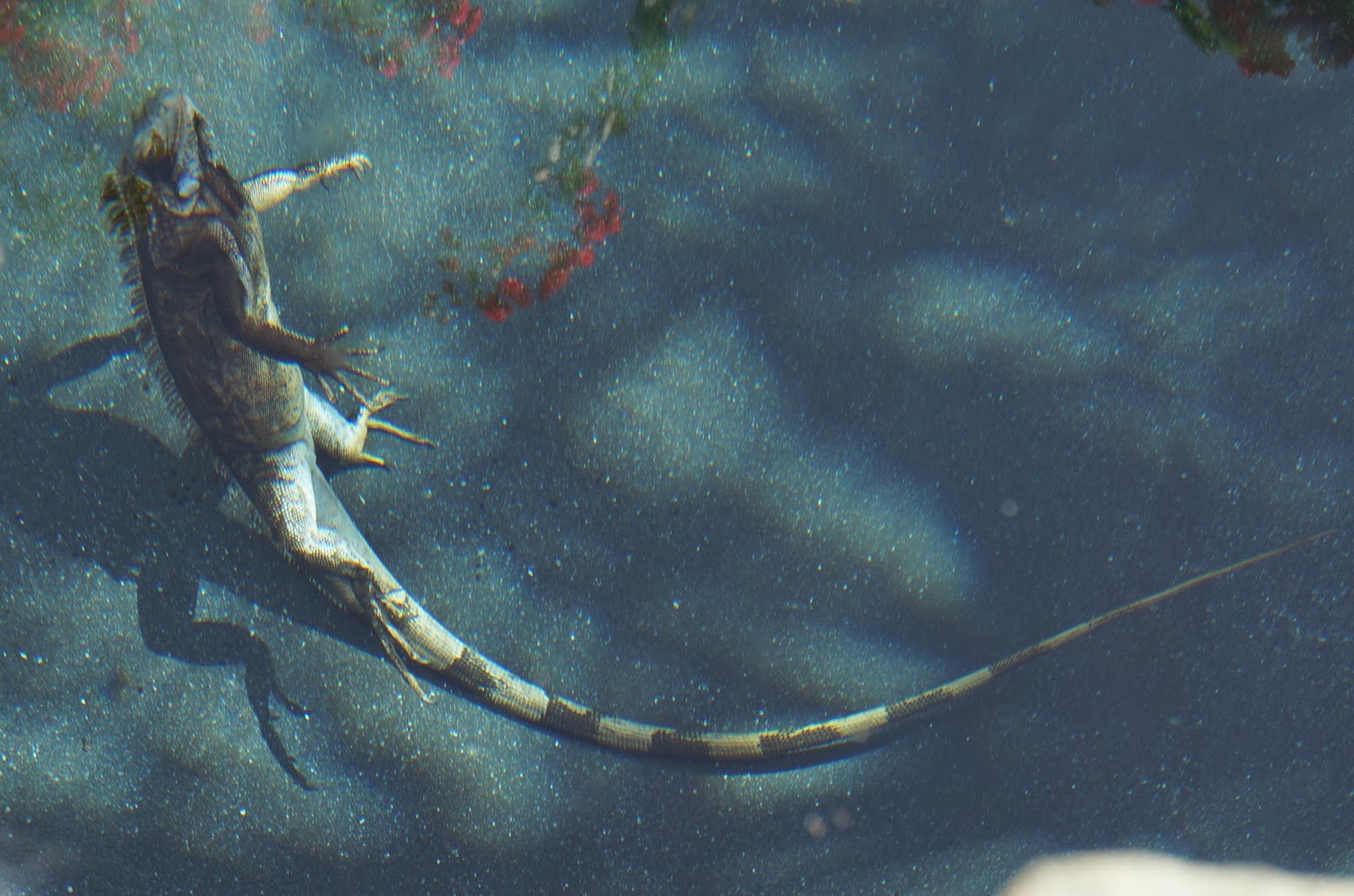 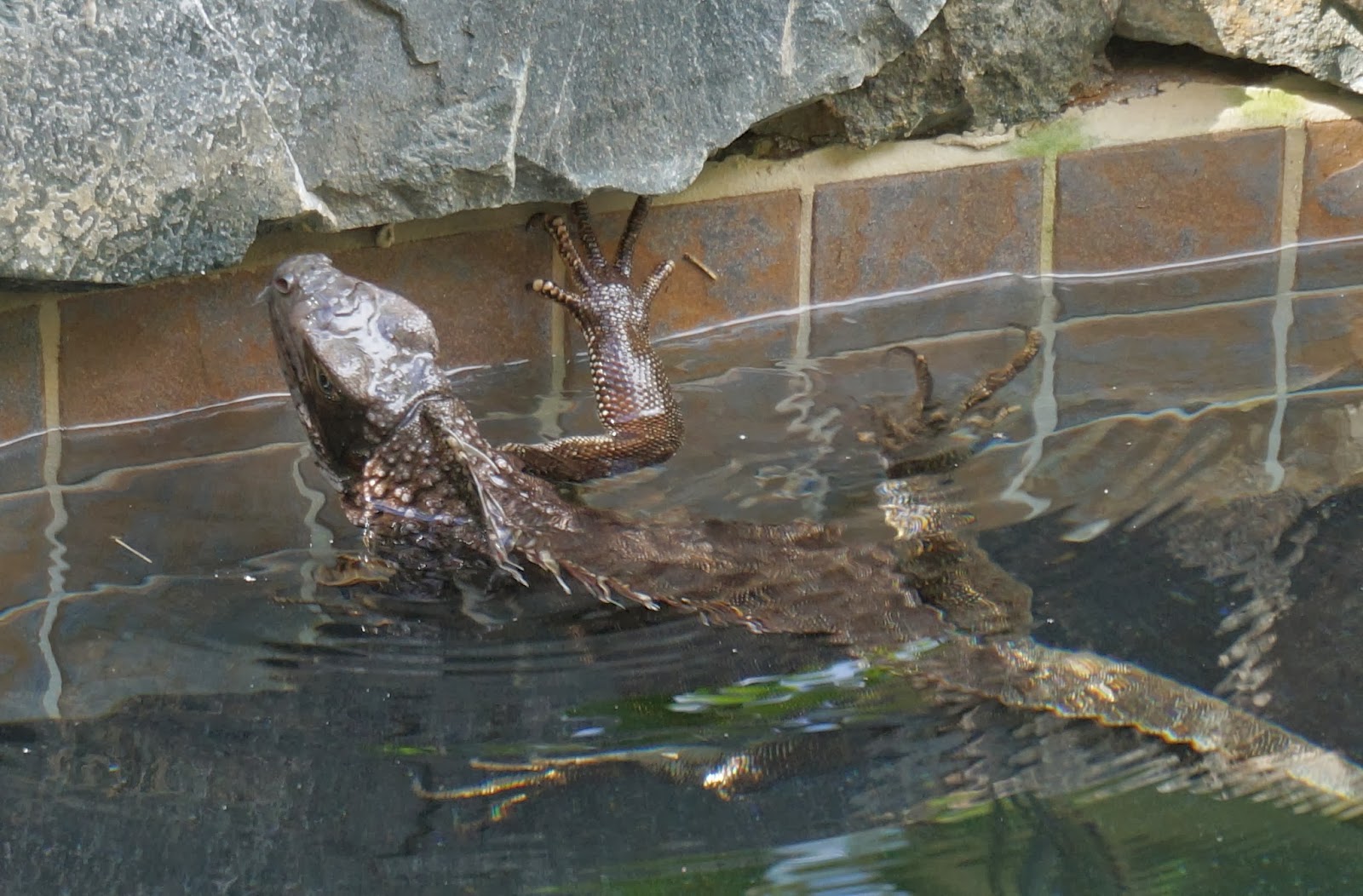 When I walked out the front door an iguana was sunning himself on the edge of the pool. As soon as he saw me, he quietly flipped over and dropped into the water. I hadn't approached him or threatened him. Why did he do that? He could have just walked away. Maybe he was just hot and wanted to cool off. He went to the deepest corner and lay there without moving.

I wanted to get him out so I took the pool brush and poked him with it. Then he quickly swam up to the surface and seemed to be scrambling to get out. He didn't manage to get a grip on the edge, so went back to the bottom and lay there. I left him alone for a while, but was concerned that he had exhausted himself and would never get out. I went on the internet and read that green iguanas are good swimmers and can close their nostrils and hold their breath for 30 minutes. Then what?

After about an hour I poked him again. He swam a little then stopped and seemed to be sitting up on his tail in a meditational pose for a while. He was in the pool for almost 3 hours - mostly underwater. Finally my husband came home and I said you have to help me get the iguana out of the pool. He pushed the iguana towards the shallow end of the pool with the long-handled brush and then I got the kayak paddle under him and flipped him out onto the lawn. He seemed cold and dazed, but slowly crept off into the bushes. 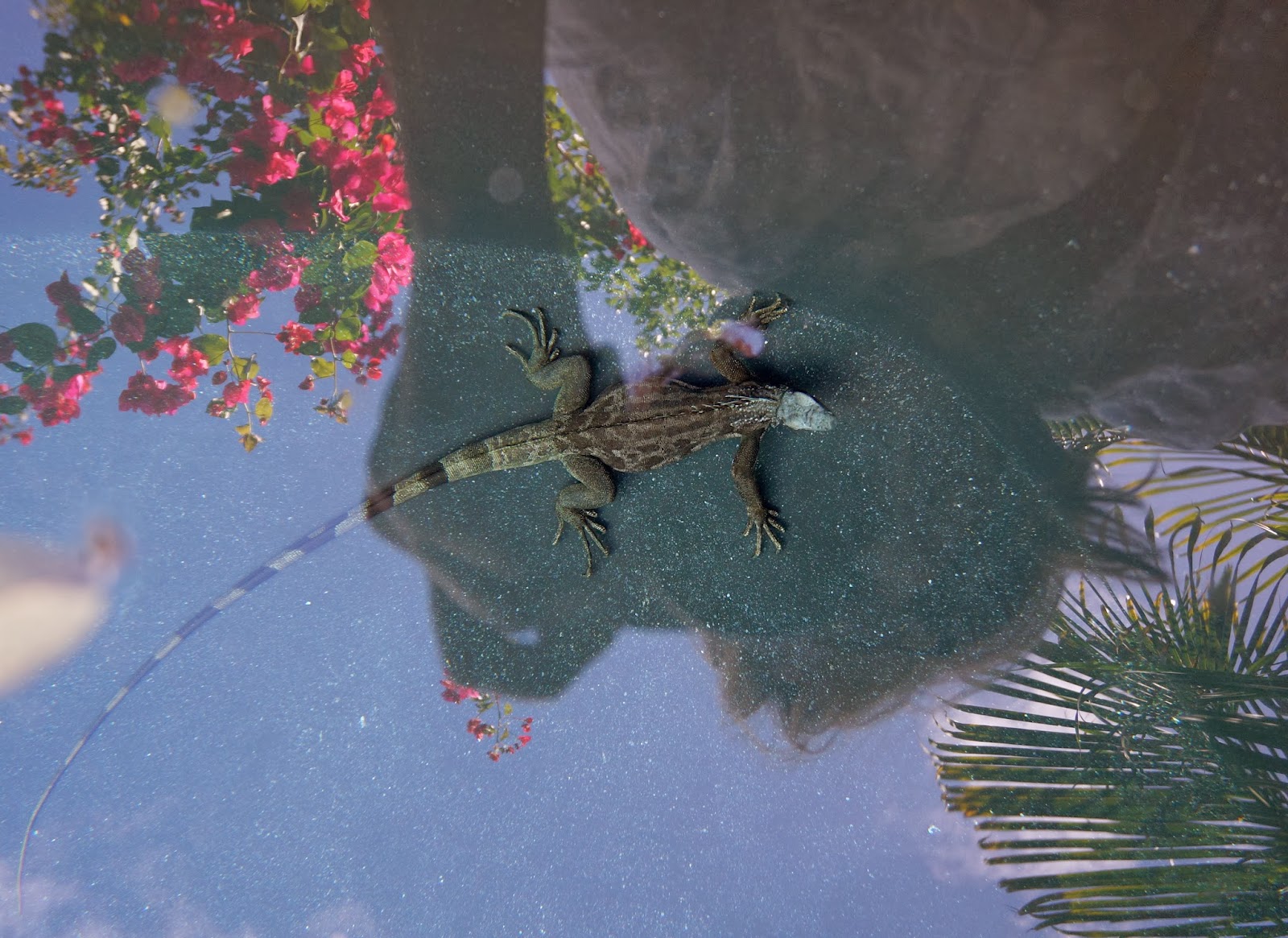 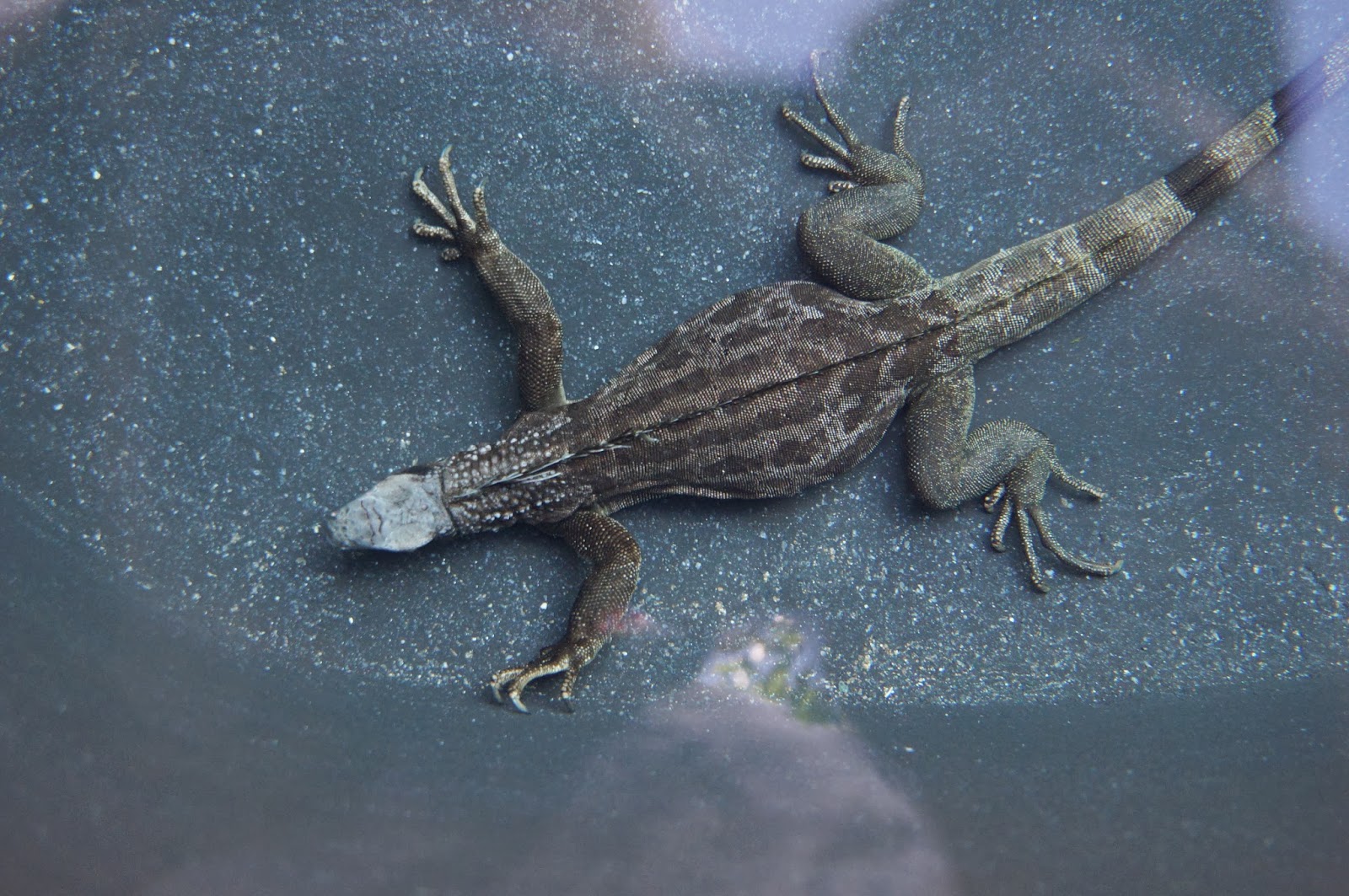 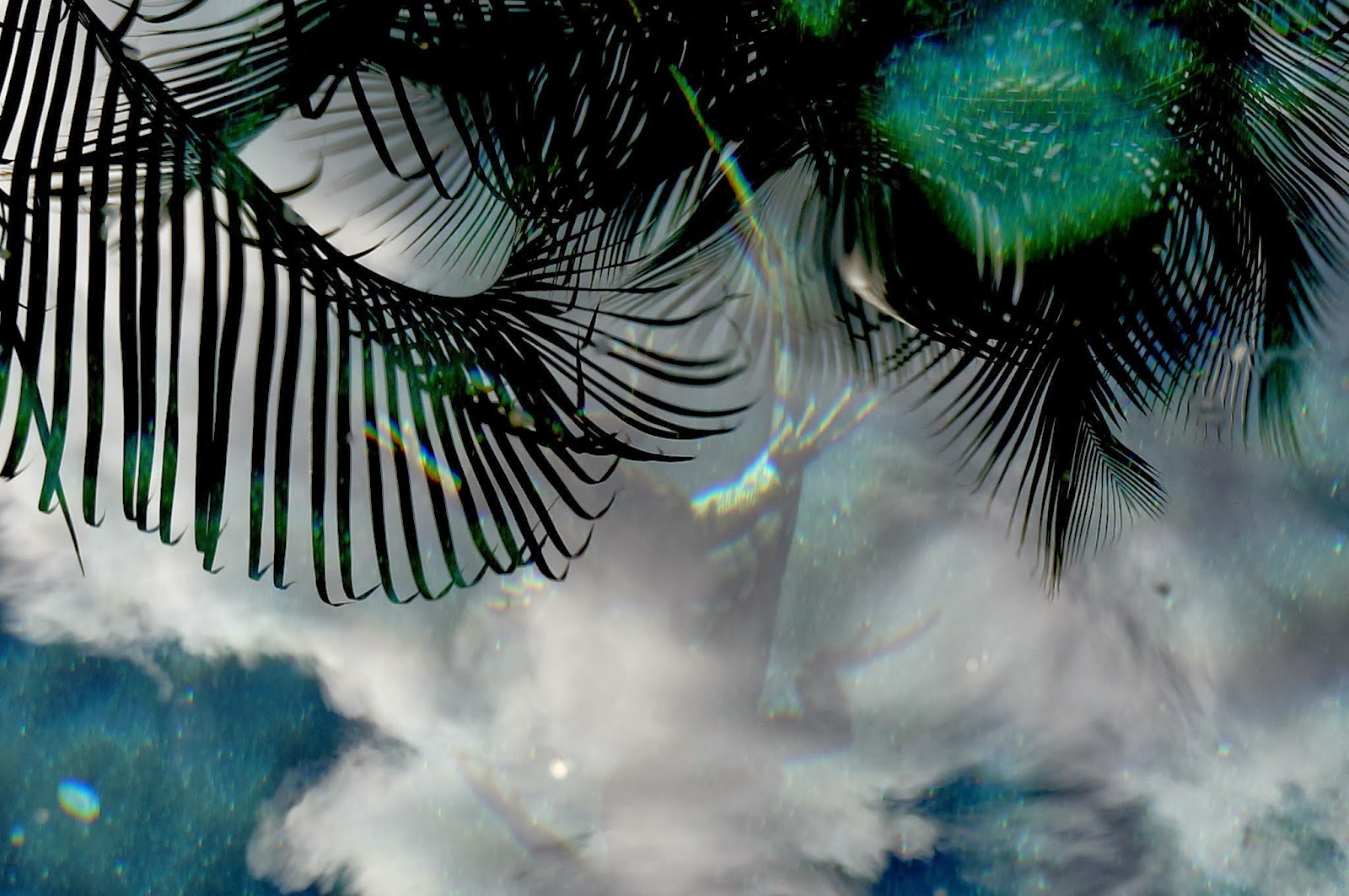 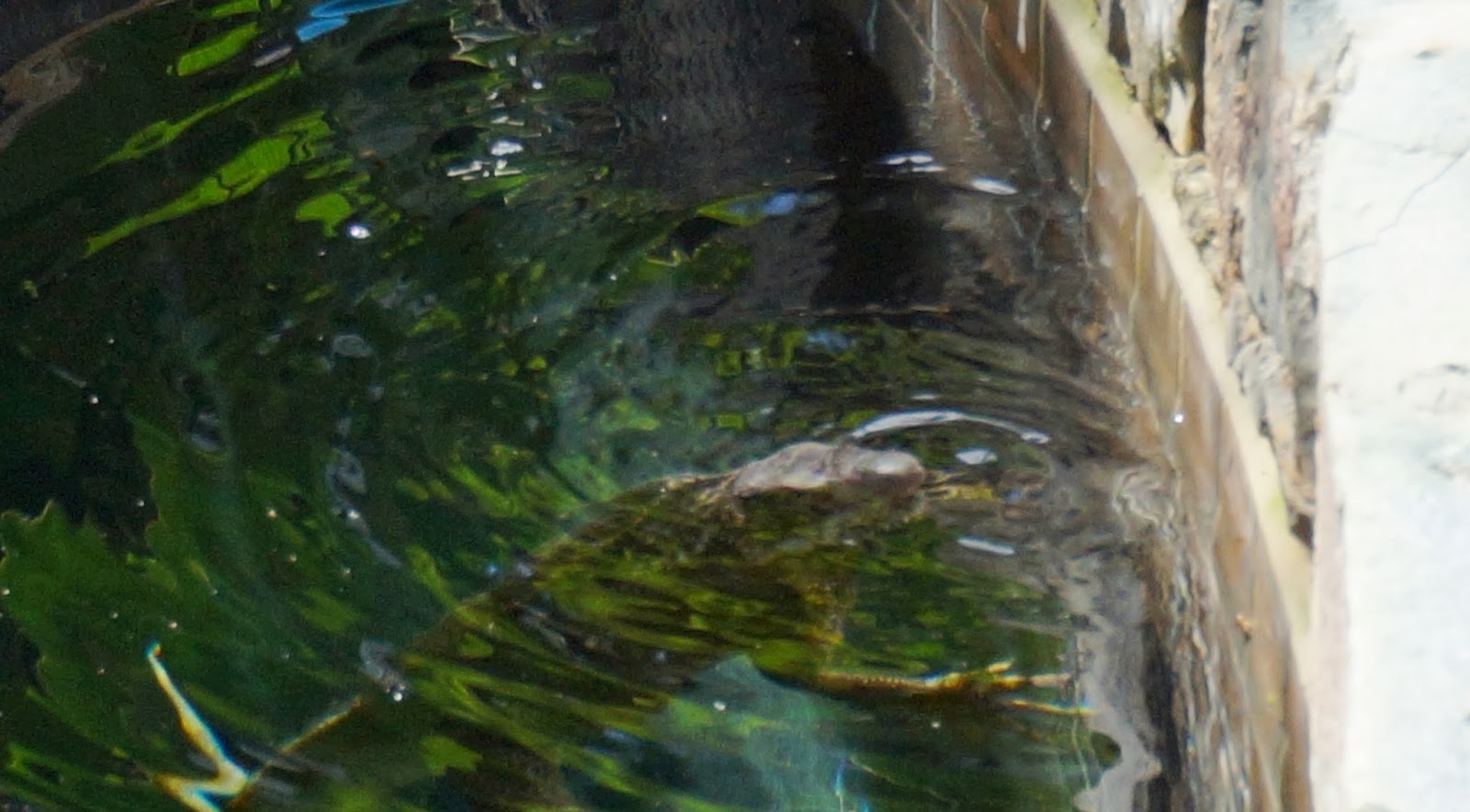