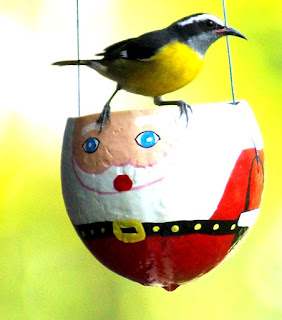 I heard that some of the volunteers for the annual Audubon Society Christmas Bird Count were going to sit on their decks the morning of the St. John count and see how many different species came by. Though I spent that day creeping through the bushes surveying ponds and beaches on the south shore, afterwards I thought it might be nice to just focus on the resident birds coming by our house.

This year for the first time I had put out some water with a touch of sugar. I hung it in a dried calabash one of my friends had cut and painted to look like Santa. At first no birds came to see Santa, but as soon as one Bananaquit couple discovered the water, those two kept coming back. Then there were more.

Soon things got even livelier. Some Antillean Bullfinches got interested in Santa, but they were repeatedly driven off by the territorial bananaquits. To defuse the tension I decided to give the bullfinches some birdseed as a holiday treat of their own. 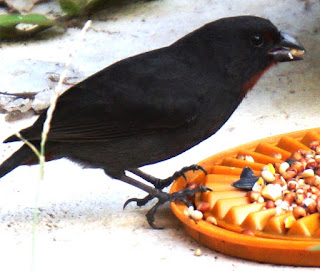 Meanwhile tiny Black-faced Grassquits were checking for smaller seeds in the patch of lawn my husband has been patiently and somewhat frustratedly cultivating. They got very excited when he decided to re-seed an area that was looking particularly thin. 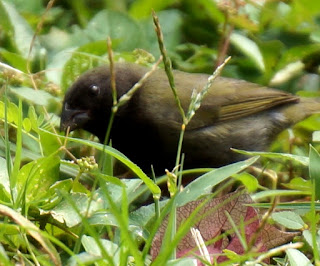 The shimmery Green-throated Carib hummingbirds are attracted to the bougainvillea flowers just off the porch. 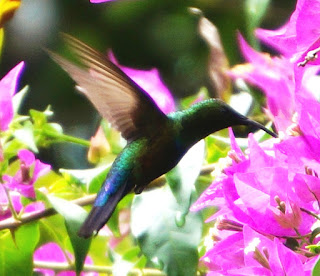 And along the back walkway Lesser Antillean Crested hummingbirds make nests in the plants hanging along the wall. 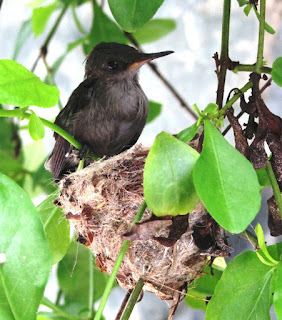 But most of the other neighborhood birds keep their distance.

Yellow Warblers are native to the Virgin Islands, and are always a bright welcome sight. They don’t come right up to the house, though, because they eat bugs in the trees. They flit back and forth, or perch nearby and sing their distinctive song – supposedly saying “sweet, sweet, I’m so sweet.” 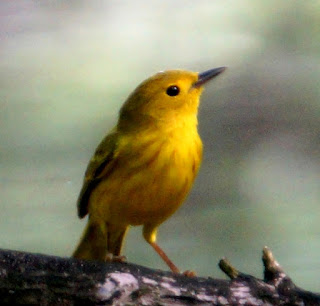 The pigeons here are nothing like the ones in New York. The Scaly-Naped ones are large and fierce looking. They sit in nearby trees and have a low, sad cooing call that sounds like “Who are you? Who are you?” 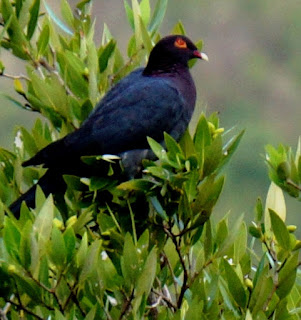 Zenaida Doves are similar to Mourning Doves I see in New York. You mostly see them walking on the ground, but if you get too close they fly up and you hear a whistling sound from their wings. Though they are lovely birds, they do make a mournful drawn-out hooing sound a little bit like an owl. I hear it as “Who WHO cooks for you?” 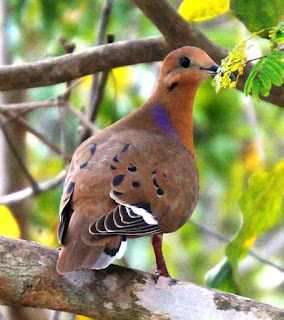 The Smooth-Billed Anis always travel in packs of five or more as they fly past our house. They actually make shared, communal nests too, which is quite unusual for birds. They are black like crows, with large beaks like parrots, and actually squawk loudly like shrill parrots as they go overhead or perch in the trees. 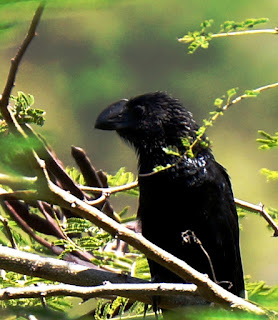 Of course there are less frequent visitors that occasionally stop by the yard, and many other birds nearby in the mangrove wetlands, along the shorelines, and in the woods. They are not always easy to see though.

The most frustrating part of my backyard birding – in fact all my birding – is hearing hidden warblers going “chip, chip, chip” in a nearby tree and not being able to see them, much less identify them. But I suppose they have their own reasons to stay out of sight, and to call to each other, and are not the least bit concerned about my frustration. Fortunately there are some birds that are friendlier and are willing to let us watch them.

But wait, no, really the most frustrating birds in the yard are the Pearly-eyed Thrashers. They are not at all shy – in fact we view them as garden enemies and wage defensive campaigns against them. What do they do? They eat the precious sugar apples off our tree while we are patiently waiting for them to ripen. They crawl inside the papayas and hollow them out so you think the fruit is still intact until you go to pick it. They strip the cherries off the trees while they are still green. 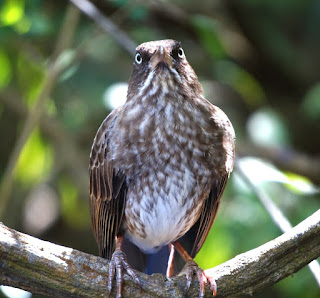 Then they sit on a branch and tweet. “You are losers. So sad.”
Posted by Gail Karlsson