Looking Under Rocks and Leaves 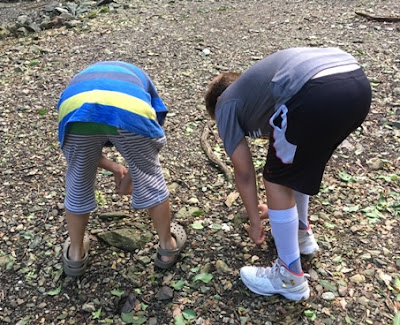 I recently joined a group of scientists, students and nature lovers poking around on the ground at Cinnamon Bay as part of an exercise they called a ‘Terrestrial Bioblitz’ – a quick inventory of all the creatures found living in the area.
Renata Platenberg, a Natural Resources Management professor from the University of the Virgin Islands came over from St. Thomas and led the hunt for frogs, lizards, snakes and crawling things. She provided us with a printed list with photos of species that are common in the Virgin Islands, and a quick briefing on how to look for them. The fallen leaves and vegetation on the forest floor provides food, moisture and shelter for many small animals and insects. 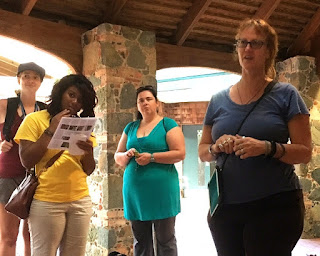 The first thing we saw, without even searching, was a male Crested Anole lizard sitting on the wall. It came out while Renata was speaking, maybe to see who was intruding on his territory. These lizards are very common on St. John, but are a bit confusing because only the males have the crests (and they are not always raised), while the females are smaller and lighter, with stripes down their backs. 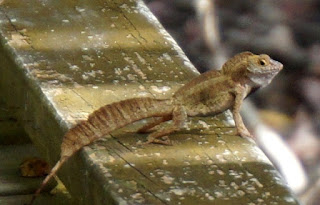 utside around the campground, Renata said that we would find baby frogs at this time of year if we pushed the fallen leaves around with our toes. One of the most common frogs you hear at night is a small tree frog called Eleutherodactylus antillensis. The adults are usually a little more than an inch long. An unusual thing about these frogs is that they don’t release large bunches of eggs in water, but instead lay small batches under leaves lying on moist ground. The developing embryos go through a tadpole stage while they are still inside the egg and emerge as fully formed frogs. We were excited to see that little frogs did in fact jump around when we poked the leaves on the ground. 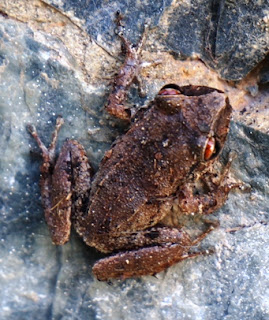 When we moved rocks and pieces of wood, we also saw some of the big hairy tarantulas, or ground spiders, that live in burrows. They are not usually visible, as they are active at night, and they weren’t happy about being disturbed. But they stayed calm and quiet while groups of people came over and gawked at them. 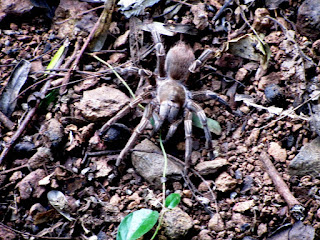 We also found a Buthid scorpion under a rock. Nearby was the transparent exoskeleton it had recently shed so it could grow larger. These scorpions will give you a nasty sting, but it won’t kill you and the pain goes away fairly quickly. 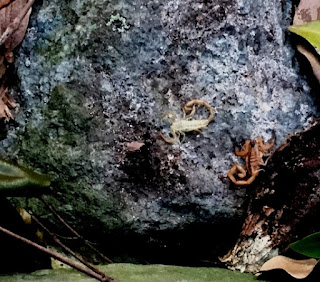 Almost as fun was the ‘beautiful’ native cockroach Renata found under a rock, distinguished by the stripes on its back, very different from the non-native ones under my sink. 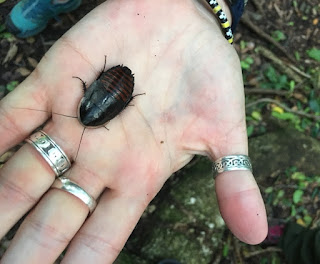 We also spotted a long black millipede locally known as a gongolo. Though they generally feed on leaf litter, they are not always on the ground, but can often be seen up in the trees.

The most exciting thing Renata found under a rock was the famous amphisbaena, which is rarely seen because if it comes out of the moist leaf litter it will quickly dry out and die. It looks a lot like an earthworm, and is sometimes also confused with the local blind snake. However, it is neither a worm nor a snake, but a legless lizard. Apparently its bone structure indicates that it is descended from an ancestor with legs, though it currently seems pretty wormy. 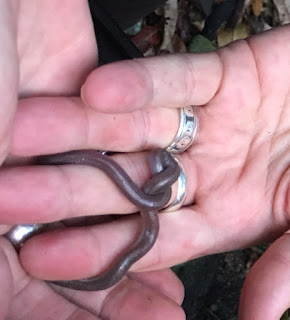 Other members of the BioBlitz group found different species, and then shared their photos and information, which will be used for conservation and education programming. 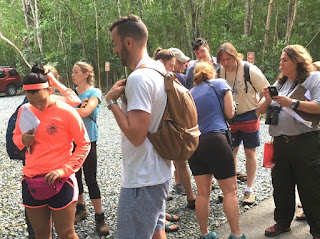 One challenge came up when we examined a piece of a broken termites’ nest. These nests are bulbous structures usually found on living trees, made out of chewed up wood fibers from dead wood lying on the ground. The termites provide an important service by cleaning up the forest floor. But no one knew the function of the round balls we could see inside the piece of nest. Anyone have any ideas? 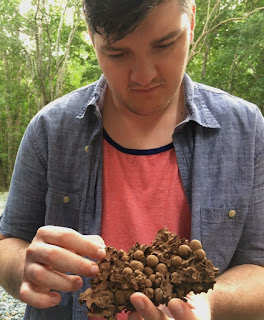