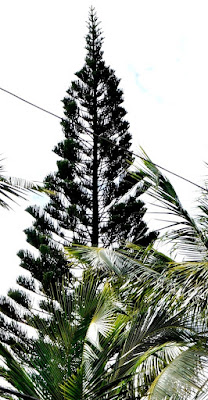 Why are there tall evergreens on St. John that look like Christmas trees? Don’t they belong up north?

I got to wondering about this when I was up in the Maine woods this summer working on a book about trees in St. John, as part of the Unitarian Universalist Fellowship’s Tree Appreciation Project.

Maine is known as the Pine Tree State, and its famous evergreens have evolved to deal with long winters. Their needle-like leaves can carry out photosynthesis even when the temperatures drop below freezing, and minimize water loss – a major advantage over broad-leaved trees, which lose more water through evaporation and have to constantly replace it by pumping water up from the ground. When the ground starts to freeze, those broad-leaved trees have to drop their leaves and shut down for the winter. Pines need less water, and also have stronger cell walls and antifreeze chemicals that keep the water flowing and prevent frost damage to their interior water tubes.

It didn’t seem like Maine pines would be comfortable in St. John’s hot, dry winters, even though many other Northeast residents are happy to come down and enjoy the warmer climate.

Still the pines were doing okay with the hot weather in Maine in August, and there are some pine trees that do grow in warm climates. It turns out there are even some species native to the Caribbean.

But the tall evergreens on St. John are actually from the South Pacific. They are commonly called Norfolk Island Pines, though they are not really pines at all. They are Araucaria heterophylla trees native to a three-by-five-mile island east of Australia, not too far from New Zealand. Temperatures there never drop below freezing. 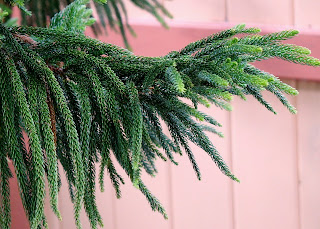 The island was uninhabited in 1774 when Captain James Cook of the British Royal Navy sailed by on one of his trips to explore the world and expand the British Empire. While he reportedly described it as “paradise on earth”, he mostly seemed to be thinking about how to exploit its resources for conquest and commerce. The tall pine-like trees growing there – some up to 200 feet tall – seemed like they would provide a valuable new source of ships’ masts for the navy. Captain Cook claimed the island for Great Britain, and named it for the Duchess of Norfolk.

The trees in England that were suitable for use as masts had long since been cut down, and access to a supply of good mast trees was a major factor in dominance at sea during the era of wooden sailing ships. Pine trees were prized because they were straight and tall, and their resin reduced friction between the grains of the wood, enabling them to withstand the pressure of strong winds on the sails.

Earlier, the British colonies in New England, including what is now Maine, had proved to be a good source of white pine trees large enough to be used as strong ‘single-tree’ masts. When Captain George Waymouth first explored this part of the coast for the British in 1605 he was awed by the seemingly endless forests and brought back samples of the impressive white pines, along with some seeds which he planted in England.

By 1690, settlers in the New England colonies had already cut down many of the big pines to build houses, boats and furniture. To preserve the important mast supply, the British surveyed and claimed all the large, old-growth white pines as the property of the King. The colonists resented these restrictions on their use of the valuable pine trees, and often cut the trees anyway. Over time this resulted in conflicts between settlers and British authorities, which became one of the factors leading up to the American Revolution.

In 1774, with few mast trees forthcoming from the rebellious American colonies, the British were understandably excited about Captain Cook’s discovery of a new source in the Pacific. Unfortunately for the British Navy, the tall, straight trees on Norfolk Island turned out to be unsuitable for making masts – they were brittle and broke off because they lacked the resin that made the white pines resilient. Their wood was subsequently used for less demanding types of building purposes in Australia and other British territories. Over time, these tall, attractive trees were also widely planted as ornamentals in tropical and sub-tropical areas around the world.

German settlers in America brought with them their tradition of decorating evergreen trees for Christmas, and by the late 1800s this practice had caught on around the country. Pine, spruce and fir trees began to be grown in plantations and cut for short-term holiday use. Growing up in New York City, I loved walking through pop-up stands of evergreens for sale in December on busy streets. They formed mini-forests filled with the distinctive scents of the north woods. But it was sad when all the trees were thrown back out on the streets as trash after the holidays, somewhat dried out but still often glittering with tinsel.

In recent years, some people have avoided feeling guilty about cutting down and then quickly discarding beautiful trees by instead buying ‘living’ Christmas trees in pots. It turns out that many of these trees sold for this purpose are young Norfolk Island Pines. Because they are used to warm temperatures, they can stay healthy for a longer time inside people’s homes than northern evergreens.
A few years ago a friend in St. John gave us one of the potted Norfolk Island Pines as a present, complete with red bulbs and bows. We kept it on our deck for a while, then decided to plant it in the yard. It was hard to find a place suitable for it, considering the possibility that it might grow to be 200 feet tall – and how big around? 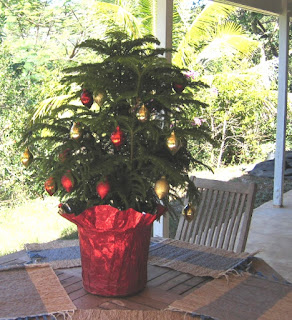 It only grew to about 15 feet tall, though, before drying up during the drought last summer while we were away. I was sad to come back and see it had not survived, even though it was not native to this island, and would probably have obstructed our driveway if it had actually grown to its full size.
Posted by Gail Karlsson