How Magnificent is the Frigate Bird? 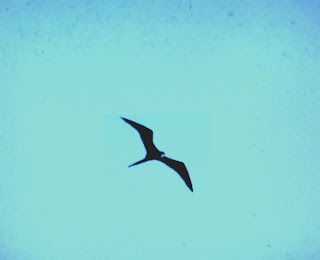 I have never seen a magnificent frigate bird up close. Mostly they appear as dark figures hovering high overhead, easily recognizable by their sharply arched wings.

During one of the weekly bird walks at Francis Bay, National Park Ranger Laurel Brannick mentioned a recent National Public Radio report about scientists who put electronic tags on frigate birds and found out they can stay aloft for weeks, barely even moving their large wings (which are up to six feet across).

One frigate bird was recorded soaring 40 miles over the Indian Ocean without a single wing flap.

But it wasn’t just finding out that they effortlessly travel long distances that was amazing. It turned out that they also reach heights of over two miles above sea level as they travel, way higher than other birds.

How do they get so high without flapping? They use the clouds.

Puffy cumulus clouds looking like cotton balls form over the sea when warmed-up air rises in a plume. Water vapor condenses into a cloud as the warm air rises and cools. The frigate birds catch a ride on the warm updraft of air and then move along inside the cloud.

If they are floating up there so long, how do they eat? Again they use the clouds.

They are fish eaters, and the updraft of air that lifts them also stirs the sea water, bringing up nutrients, which attracts small fish, and then larger ones, sometimes creating a boil of feeding fish. When that happens, the frigate birds can drop down through the cloud, pick up some of the fish thrashing around below, and then ride back up the thermal plume.

Astonishingly for fish-eating birds, frigate birds will drown if their feathers get wet. They have to grab fish with their hooked beaks while staying well above the waves. Laurel told me she once found a dead frigate bird floating out in the water on the North Shore. Since their feathers aren’t waterproof, they get very heavy when wet and can’t fly.

An alternative way the frigate birds get fish is by stealing them from other birds. This behavior has earned them a reputation as pirates – which brings me to my own story about seeing a so-called ‘magnificent’ frigate bird in action.

One afternoon I stopped by Maho Bay for a swim and was getting near one of the buoys offshore when I noticed a white bird sitting there, with some black on its head. It looked like a tern, but I couldn’t see what kind so I slowly swam closer to get a better look.

As I approached I decided that it was a royal tern. I also saw that it had a skinny fish hanging from its beak, maybe six to eight inches long. While the bird watched me cautiously, it raised its beak, shook it around, and managed to get the fish down inside its throat. I was very impressed with how the small tern could swallow a whole fish like that.

The tern seemed pretty pleased as well, when suddenly we were both shocked to see a large dark shape swooping down like fighter jet, ferociously pecking at the tern, then coming back quickly to attack from the other side. I soon realized it was a frigate bird because of its size and dark wings, but at the time didn’t understand what it was doing.

After a few minutes of ducking to avoid the sharp beak of the frigate bird, the tern decided to get down from its perch on the buoy and seemed to be using its wings to swim away through the water. The frigate bird continued to attack the tern in the water until finally in desperation the tern raised its head and pecked back.

At the exact moment the tern opened its mouth in defense, the frigate bird reached in and pulled the whole fish out by its tail and triumphantly flew off. I felt really sad for the poor battered tern.

When I got back to shore I excitedly told my story to my friends, who hadn’t noticed a thing. Unfortunately I didn’t have any photos to document the drama. They suggested that in the future I should wear a Go-Pro camera on my head if I was going to be bird-watching while I was out swimming. Maybe not a bad idea.