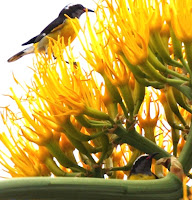 The three thriving Agaves or century plants now in bloom at Concordia are a bittersweet reminder of the years when hundreds of tall green stalks like huge spears of asparagus shot up all over St. John.

The century plants usually started up around Easter time. (They mostly bloomed after about ten years, not one hundred.) Soon afterwards the stalks were covered with massive clusters of yellow flowers that lit up the landscape, bringing joy to birds and bees as well as the eyes of beholders.

By the end of the year, the yellow flowers would be long gone and the thick dried stalks held clumps of dark empty seed pods. These dry stalks came to be used by settlers from the States as alternative Christmas trees.

When my sons were young, they set out with my husband like frontiersmen, taking the axe and climbing through thorny bushes to triumphantly bring home the tree. It was sometimes so tall it touched the rafters, and we needed the ladder to put the decorations on the top.

Then about fifteen years ago there started to be fewer and fewer century plants. One year we couldn’t find any at Christmas time and bought a fir tree from St. Thomas instead. It smelled nice but didn’t feel very tropical.
The next year there was one small, crooked century plant stalk on our land, and that turned out to be our last one. After Christmas I sprayed it to keep the termites from eating it and saved it in the storage area. For years I dragged it out in December and gave it a coat of gold paint before decorating it. Then I just left it up as a permanent art installation, but without the Santa Claus ornaments. It looks a bit sad, even when it is covered with festive lights and treasured ornaments, but I still treasure it.
So what happened to all those century plants?
It was an insect invasion. Agave snout weevils ate them. The female weevil uses its pointy proboscis to make holes in the plant, and puts its eggs in there. (This weevil’s scientific name is Scyphophorus acupunctatus, which refers to this hole punching activity.) Micro-organisms get into the holes and damage the plant, and then when the larvae or grubs develop, they consume the heart of the plant and kill it.

When I did some research on these weevils, I learned that they have decimated the commercial agave crops in Mexico, which are used to make mescal and tequila. The ‘worm’ that the producers put in the bottom of the bottle is sometimes actually the grub of the agave snout weevil. Payback?
And how did these weevils get to St. John from Mexico, other than in liquor bottles?
Actually they are world travelers. Ornamental agave plants have been sold almost everywhere, so pots and soil infested with the weevils have spread these pests internationally.
It seems strange, though, that these specialized weevils would completely destroy their agave hosts. Shouldn’t they be considering the needs of future generations and the long-term survival of their species?
Well, yes, it is true that parasites shouldn’t really kill their hosts, but sometimes it is just too easy. The local Agave missionum plants did not co-evolve with these weevils, so didn’t develop any resistance, as some of the Mexican ones have. They just fall over and die.
Theoretically, once all the agave plants on St. John died off, the weevils themselves should have starved to death and not left any survivors. So any new century plants should be safe – unless new weevils come in, or some of the old weevils survived by eating other plants and are now hungry for agaves, or there is now some other threat?
In March I saw a small century plant blooming along the South Shore Road, but it didn’t seem to last very long. Then in April I saw the large ones at Concordia and got excited about how tall and healthy they looked, covered with birds and bees. Like old times. I do hope they are able to survive and spread their seeds. It would be great to have a new generation of weevil-free century plants on St. John.
﻿
Posted by Gail Karlsson