Why the Red Face, Gallinule? 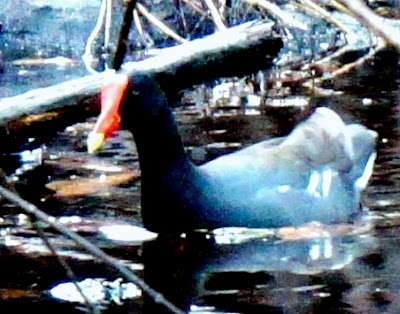 This winter I lay in bed wondering about the strange sounds I was hearing from the pond below our house. I had learned the calls of the night herons and the clapper rails, and some of the frogs, but this was different – a high-pitched, drawn-out series of squawks.

What could it be? The cries of some poor creature being tortured in the night? A witch’s laugh?


I finally found out when NPS ranger Laurel Brannick identified a similar sound at Francis Bay during one of the Friday morning bird walks. It turned out to be the call of a Common Gallinule, Gallinula galeata – formerly known as a Common Moorhen. 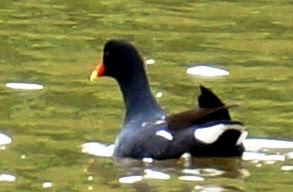 Check out recordings of some of its cackles, yelps and squawks from the Cornell Lab of Ornithology or the Audubon Society.


It is not a rare bird, and is native to the Virgin Islands as well as many other places in the western hemisphere. The gallinules are related to clapper rails, and also American coots. Though common, they aren’t always easy to see because they usually hang out in dense swampy areas.


Besides alarming me, their loud calls are supposed to help them find their friends in the dark, or warn competitors to stay out of their territory.


Eventually I was able to spot one of the gallinules down by our pond. It was sneaking through the pneumatophores – root-like projections that help the roots of black mangrove trees get oxygen – looking for snacks. They eat both plant parts and small aquatic creatures. 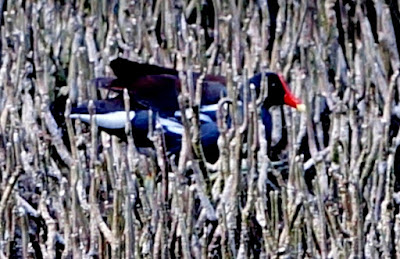 When you actually see one of the birds, its face is even more distinctive than its call. The bill is bright red with a yellow tip, and then the red bill seems to extend up the front of its face.


The red part that goes up its forehead above the bill is called a frontal plate or facial shield. It isn’t the same material as the bill, but a type of hard skin that grows from the base of the upper bill, and can swell up and get brighter in response to hormonal changes. This is not a common feature for a bird. (The related American coots do have a similar plate, though theirs is white rather than red.)


What a strange look. Why would anyone want to wear a red mask? 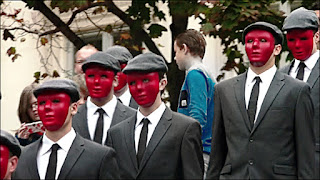 One idea is that the gallinules’ facial shields help protect the birds’ faces when they are foraging in the swamp or defending their territory. Is that really effective or necessary? 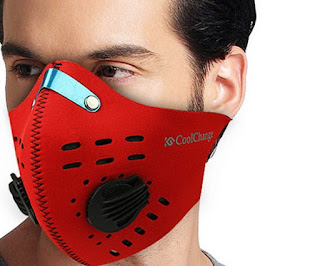 
Like so many other strange affectations, a red mask could just be a way of attracting prospective mates. 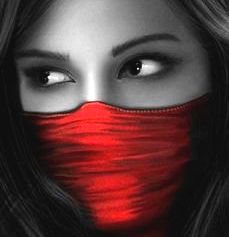 
Male and female gallinules both have a shield, so it is not a sign of male differentiation from – or dominance over – the females. Both sexes are socially aggressive, and they share parenting duties. For both, a bright shield is an indicator of good health and social status.


Still, there is an element of courtship display and competition. A study of the some gallinule relatives in New Zealand (Pukeko swamphens) concluded that the size and width of the facial shield in males was strongly correlated with testes mass, suggesting that a large red mask is a sign of masculine strength.


But they also found that male social status can shift quickly. The gallinules’ testosterone levels (and facial shield size) quickly decrease if they do not respond successfully to challenges by other birds. 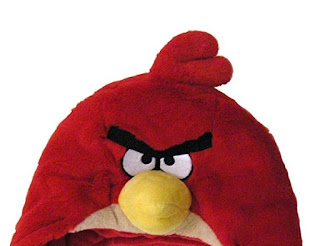