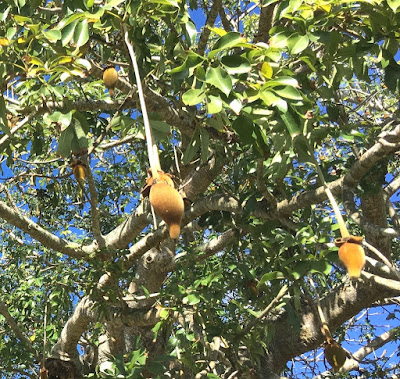 So why doesn’t the one on St. John?


Baobab trees are viewed as strong, spiritual presences – but they can also be sexy and fertile.

In its native Africa this type of baobab (Adansonia digitata) is known as the Tree of Life. It can retain water in its pulpy bark, and during dry periods it is an attractive hub of activity for birds and animals, insects and humans. Some people also think baobabs harbor ancestral spirits that can intercede to bring them love and good fortune.


Yet on St. John, our lady of the L’Esperance Trail appears to be virginal. Well, even if she gets pollinated, she doesn’t bear viable fruit. 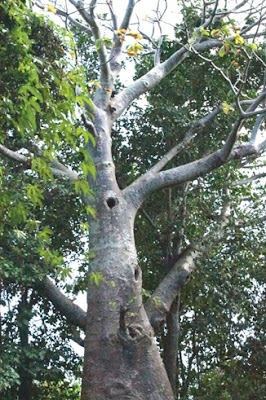 What is the problem?  And is it any of our business? Probably not, but we can speculate.


Is she too young?


In semi-arid environments, baobab trees may not start flowering until they are 125 years old. (They are said to be able to live up to 1200 years.) Well, this one is growing on a ridge where there isn’t great soil or a steady water supply, so that may have allowed her to keep a girlish figure, but really she is probably well over a hundred years old, maybe closer to two hundred. Definitely not too soon to be thinking about babies.


Is she really male?


Some people in Africa identify baobab trees that produce a lot of fruit as females, and call the others males.  However, one study of baobab trees in Africa found that there were no genetic differences between the producers and non-producers. Nor did tree size or environmental conditions appear to account for the differences.


Do pollinators find her unattractive?


The baobab’s flowers open at night and hang down from a stalk, just right for bats. The flowers are said to smell sweet at first, but then turn rancid. Perfect. Bats like things that smell like carrion. (On St. John the flowers are high up so it is hard to smell them until they fall, which usually happens within a day or so.) 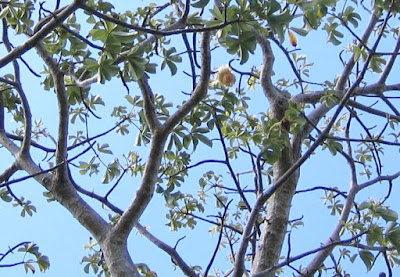 
St. John has plenty of potential bat pollinators. You can see Jamaican fruit bats nearby, roosting on the ceiling of the old Reef Bay sugar mill at the end of the Reef Bay Trail. 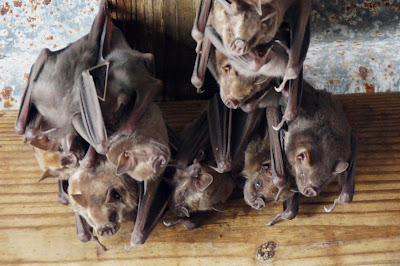 Does she need a boyfriend?


Well, it turns out that these baobabs, like many other trees, have what is called a ‘perfect’ flower - male and female parts on the same flower. That seems a bit incestuous, but it works fine for lots of trees. 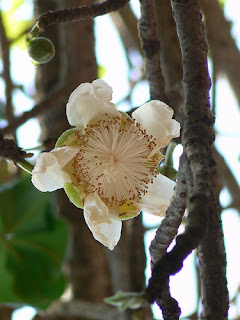 
Not all of them though. Some trees just don’t believe in self-pollination. Or they do give it a shot, but then abort the fruit before it matures.


The diagnosis – most likely our St. John tree is suffering from a case of ‘self-incompatibility’. Hmmm…I think I feel that way sometimes too.


Anyway, yes, it does seem like she needs another tree – or several – for companionship and pollination.


My friend Joan suggested that I should try to bring back some baobab fruits from St. Croix when I went to the AgriFest, so I took that on as a quest. Maybe we could germinate the seeds and raise more baobab trees on St. John.


At one time there were over one hundred baobab trees on St. Croix. How did they all get there?


I was told that the captured slaves brought seeds over on the ships from Africa, but I wondered how they could have carried them, given the cruel conditions under which they made that passage. One writer reported that the Africans may have carried the seeds in small pouches tied around their necks as nutritious emergency rations, as this was a common practice for travelers at home. Or the fruits could have been carried on the ships by the crew since the pulp is high in vitamin C and could be used to prevent scurvy during long sea voyages. In any event it was a sad trip across the Atlantic for the unwilling passengers from Africa.


Some of the baobab trees were fruiting on St. Croix when I was there, and I was able to get one seed pod from the Ridge-to-Reef Farm stand at the fair. But I wanted more.


The next day we went to the St. George Botanical Garden and just as we were leaving I snooped around under their baobab tree out by the parking lot. 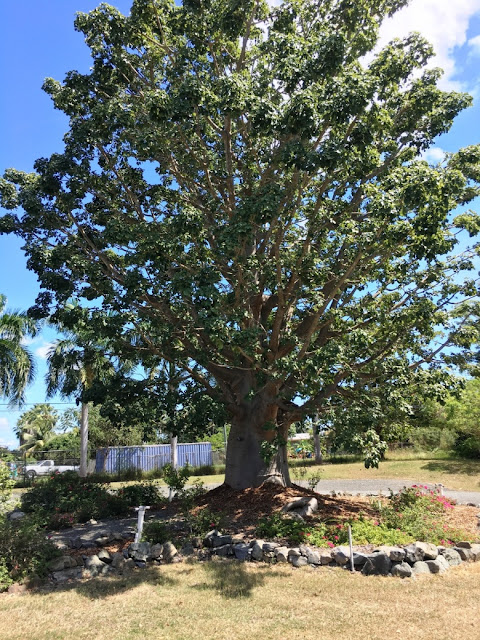 I found a small ratty-looking fruit hanging on a bush by its tail. 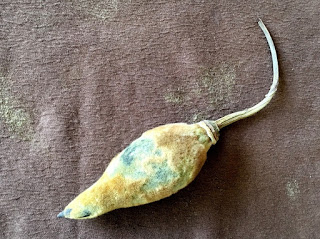 Later my friend Mandy drove us to Grove Place to see the really magnificent baobab there, with three big trunks and a fourth smaller one. It supposedly dates from the 1700s and is currently the oldest baobab tree in the Virgin Islands. 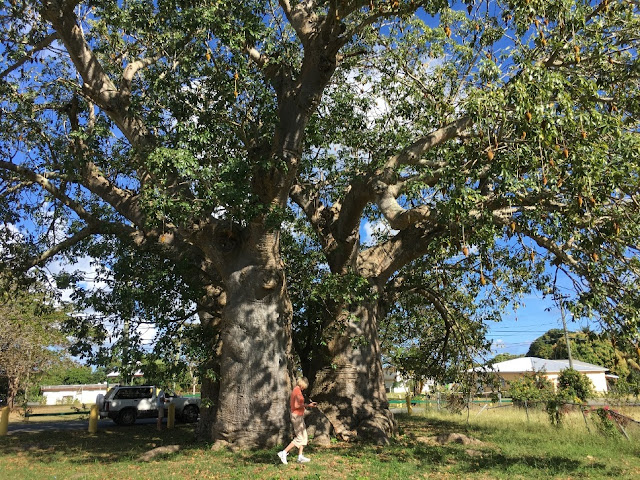 Over 50 feet around. And so muscular looking. 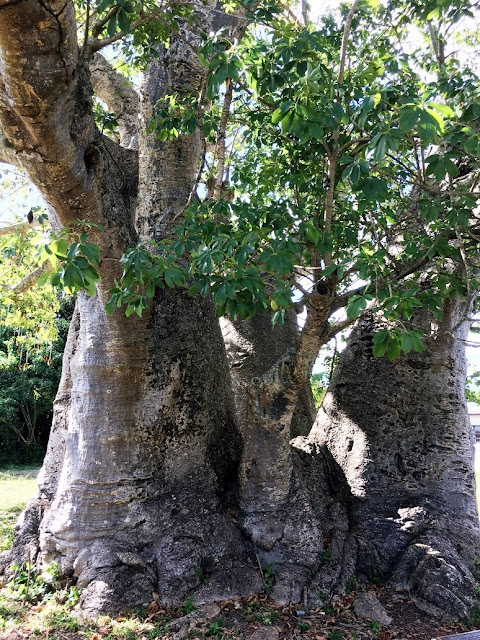 It had lots of fruit, and we picked a nice clean one off the tree - so beautiful, with its soft rusty-colored fur not yet looking moth-eaten. A real treasure. 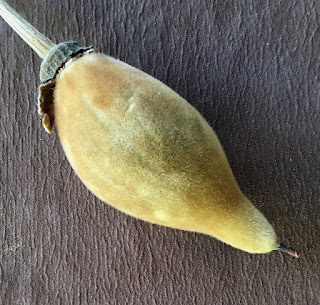 We broke open one of the fruits and tasted the tart pulp inside. Some people think it tastes like a tamarind. I thought the small pulp nuggets were like sweet-and-sour candy with seeds inside. 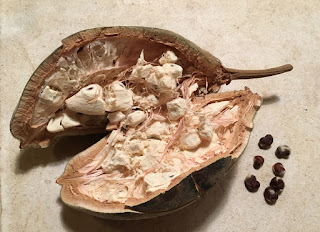 So now I have collected some seeds. The next thing is to figure out the best way to germinate them and get them growing. I am hoping to get some help from my neighbors with that – I have begun handing them out and encouraging people to plant them in pots.


If that works out, we can try moving them into the ground, especially around Fish Bay, which is just down the hill from our baobab – not too far for the fruit bats to fly at night from one to another, carrying the gift of compatible pollen.


It might take a few hundred years, but we could be the ones to finally bring joy and fulfillment to the lonely L’Esperance lady waiting so long for love.
Posted by Gail Karlsson