Is St. John ‘paradise’?
The recent Cosmopolitan magazine article by Noelle Hancock that went viral on the Internet offered an idyllic version of island life: “Sunlight sparkles on the water. Sailboats bob companionably in the distance.”


Images of the attractive author in her bikini cavorting on one of St. John’s loveliest beaches seemed to prompt thousands of people to consider chucking their dismal lives and moving here to serve ice cream in paradise. “I was happier scooping mint chocolate chip for $10 an hour than I was making almost six figures at my previous corporate job.”


At a recent beach party there was grumbling about what she left out. Sure she mentioned that there was a chicken in the shower – that was cute maybe – but what about big flying cockroaches? Some critics thought people reading the article would show up with unreasonable expectations. Others worried that if it sounded too perfect here on St. John, too many people come and that would ruin what is actually great about the island.


Earlier that morning during a talk on the topic of celebrating island life we had been encouraged to respond to whatever we experience with a sense of gratitude: remember nothing is either good or bad, everything just is. Hmm…people could stay in the city if they believed that – they wouldn’t need to come to St. John to look for happiness.


Those who are not ‘one with everything’ tend to have strong opinions about what is acceptable in paradise. It is great to spend a sunny afternoon fooling around with friends in clear turquoise water, but we are quick to pass judgment on unwelcome intruders. What are those nasty little stinging things in the water? Sea lice? Yikes!


On the way home I drove past the sargassum seaweed that had accumulated in Fish Bay. My neighbors living nearby complained it was stinky – and they were right. Besides it didn’t belong there. 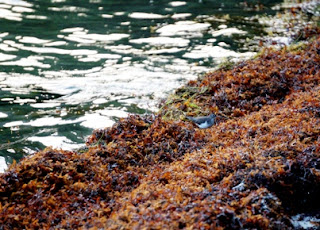 
Sargassum is a type of marine plant – actually brown macroalgae – with air bubbles that keep it afloat. There is a huge mass of it north of us in the Sargasso Sea where several different ocean currents form the North Atlantic Gyre. It supports a wide diversity of sea life, including crabs, mollusks, shrimp, seahorses and fish. In addition, it provides a home for baby sea turtles, which ride the Gulf Stream to go hang out there and hide from predators until they are fully grown.


However ecologically important sargassum may be in the Atlantic, it is not welcomed by beach lovers or boaters in this area expecting to enjoy clean shorelines and clear water. Or even by hatching baby turtles that wouldn’t even be able to get into the water because of the piles of seaweed in the way.

There does not seem to be one simple explanation for recent incursions of sargassum into the Caribbean. Late last year, the VI National Park explained that "When certain weather patterns interact, the yellow-orange weed is 'burped' out of the Sargasso Sea and carried by air and water currents through Atlantic and Caribbean waters." (St. John VI Tradewinds, December 19, 2014) However, researchers tracking the origin of a 2011 sargassum invasion into the eastern Caribbean concluded that a new source of the seaweed had developed in an area off the coast of Brazil, possibly due to high ocean temperatures and nutrient loads from the Amazon river's outflow. "The unusual nature of this event suggests that it may be coupled to larger swings in regional ecosystem dynamics due to global temperature increases."
(www.usm.edu/gcrl/sargassum/docs/Johnson.et.al.Sargassum.event.in.Caribbean.2011.65th.GCFI.Abstract.pdf)


I was feeling pretty upset about the seaweed in paradise situation, and snarling about another apparent disruption of marine life due to climate change – until I noticed the birds. Great white egrets were perched on the posts from the old dock, scanning for crustaceans hidden in the leafy sargassum strands, while a crab-eating night heron lurked in the mangroves. 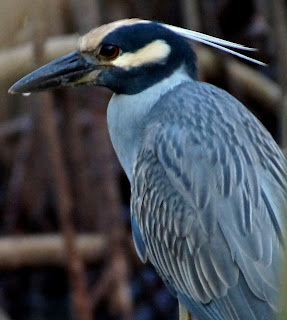 
I stopped to get a better look, and held the bottom of my shirt over my nose while I crept closer to the shoreline. There I saw spotted sandpipers running across the seaweed.


Then I was excited to see a group of some other unfamiliar and creatively-patterned shorebirds riding on the raft of sargassum, which gently rose and fell on the waves. As they drifted in and out, they flipped over pieces of seaweed with their bills to uncover the small prey it concealed.


When I got home I looked in my field guide and saw that they were Ruddy Turnstones, either winter residents or migrants from further south, getting ready to go up to breed in the Arctic tundra, probably thankful for something to fill their bellies for the long flight. 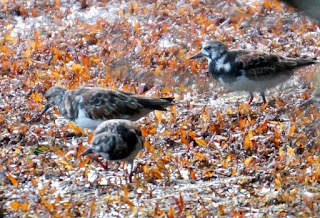 
I was filled with gratitude myself. It wasn’t a typical blissful island experience, sneaking along through smelly decomposing seaweed to spy on skittish shorebirds, and yet for me it was all good. I was fully present, intently focused on what was there in front of me, with no complaints. What more could I ask from paradise?