It’s not always so easy to tell the difference.
This is the time of year when seasonal migrants – birds and people – start showing up in the Caribbean. Many only stay for a brief stopover and then move on, but a certain number of regulars settle in for the winter, filling local beaches and watering holes and acting like they belong here.


Some permanent residents welcome the influx, while others wish the migrants would just stay where they were and leave the islands to the locals.


Of course it is sometimes difficult to distinguish locals from part-timers – at least among the herons and egrets.

In the ponds near my house on St. John I see great egrets, snowy egrets, and cattle egrets, as well as black-crowned and yellow-crowned night herons, green herons, great blue herons, and little blue herons. None of these are special types of birds that live only in the tropics. They can be found all along the east coast of the US, and lots of other places as well. But some of these birds are actually full-time residents of the Virgin Islands. How can you tell?


Herons and egrets that breed in the northeast US during the spring generally move south in the fall, and a few might pass through or even end up in the Virgin Islands. Birds in warmer southern states don’t migrate in the same way. In the Caribbean, as well, some of the birds stay around all year, raising their young on island time. Their breeding schedule is linked to the wet and dry seasons that affect the availability of food here, rather than northern temperatures and ecological cycles.


Raffaele’s book Birds of the West Indies identifies a number of birds in the heron/egret family as “common residents” that live and breed here: snowy egrets and cattle egrets, green and little blue herons, and yellow-crowned night herons.


Great egrets are considered “uncommon residents” in the Caribbean.


Last fall I saw flocks of great egrets gathering in Jamaica Bay in New York City at the end of September, and then one day in early October woke up to find a bunch of them sitting in the trees around the pond by my house in Fish Bay. It seemed like we were on the same flight path.


After a few days most of the great egrets were gone, but a couple seemed to be fishing in the pond all winter. Were they on St. John all along, or did one pair of migrants settle down in the neighborhood for the season?
You would definitely be sure that an egret is living on St. John if you could find its nest. Up north, I have seen large numbers of nests all built close together in one or two trees, since there herons and egrets usually breed in colonies in the spring and stick together for protection. An ‘uncommon resident’ couple might end up nesting alone though, and at a different time of year. I have gone around looking for great egret nests in marshy areas of St. John, so far without success. If they are here, they are pretty well hidden.

There is another indication, though, that a great egret is a resident: if you see breeding plumage. I have definitely seen birds in the pond with the long, lacy breeding feathers that are called aigrettes. (These plumes became popular for decorating ladies’ hats in the late nineteenth century, and during that time egrets were hunted almost to the point of extinction.)

So I do think at least some of the great egrets I see are permanent residents. Others, like me, travel back and forth, attracted to the warmth of the tropics, but not content to stay in one place all year. As Joni Mitchell wrote: “They got the urge for going, and they got the wings so they can go.” 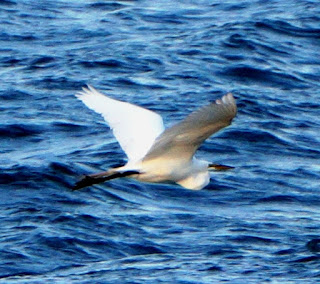