It's Not A Snake!

My scientist friend Kevel Lindsay from the Island Resources Foundation recently posted a picture of a little snake on Facebook. He identified it as a ground snake (Magliophis exiguum exiguum), a rarely seen Virgin Islands native, and expressed his concern about the survival of local species due to land development and loss of habitat.


Unfortunately photos of snakes are not too popular, so only a couple of people ‘Liked’ that post.


Imagine my excitement when shortly afterwards I spotted this little pinkish guy by the side of the road right near my house in Fish Bay.
I wouldn’t have even noticed it if I hadn’t been pulling up some weeds next to it.


At first I thought it was a big worm, but then I saw that it had a face and a mouth with teeth. I called my husband over. “Look a little snake! I have to show Kevel.” It wasn’t moving, so I was able to get my camera and take some pictures of it.
Sadly, it was dead. Not just dead but all dried up and stuck in its twisty position. It was still there when we returned from our walk, so my husband picked it up and brought it inside. It seemed like it would be about 9 inches long if it was straightened out, and thinner than a pencil.


I posed it next to a scorpion exoskeleton I happened to have on my shelf in order to show its size, and sent that photo off to Kevel in an email titled “Dried up snake” with the message “Look what we found!” 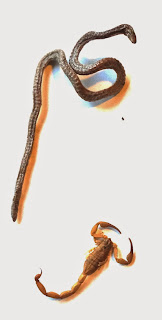 My kids had reported seeing a blind snake one time when they went to camp at the VI Environmental Resource Station, but I had never seen one myself – or any other kind of snake here.


Kevel wrote back “Amphisbaena” and also forwarded it to Dr. Renata Platenberg, a herpetologist and Assistant Professor of Natural Resource Management at UVI. She confirmed that it was an Amphisbaena fenestrata and kindly shared a picture of a live one. I asked why the one I found was all dried up like that on the ground instead or rotten or eaten up by something. Apparently they are mostly found in moist forest areas and under the ground, and their skin does not protect them from the sun, so they can quickly become desiccated.
Then I got another message from Kevel. “It’s a legless lizard, not a snake.”


Well, that was a surprise. I went on the Internet to find out more, and saw on the kingsnake.com website that “until recently they were considered to be legless lizards, but they are now placed their own taxonomic order, Amphisbaenia, apart from lizards and snakes”.


I asked Renata about that and she said she has always considered them to be neither lizards nor snakes, though the most recent genetic studies place them closer to lizards. It seems they still have some traces of their former shoulders and pelvic girdles, which would clearly distinguish them from snakes.


The name ‘amphisbaena’ is from the Greek, meaning ‘goes both ways’ – because the head and tail look similar, and they can actually move backwards and forwards making tunnels underground. They eat insects and other invertebrates they find in the ground or under rocks and fallen trees. They don’t come to the surface very often – usually only if they get flooded out or otherwise disturbed. It is hard to say why this one was caught and flash-dried by our house. There hadn’t been any big rain storm that day to wash it out.


The VI Division of Fish and Wildlife reports that these creatures are not very abundant, and very few people have seen them. (Renata said she has looked and looked for them for 10 years and has only seen a handful.) Mostly gardeners and farmers come across them when they are digging in the soil. Or people’s cats drag them in. Our cat is much too old now to catch lizards, even legless ones. I guess we just got lucky.


Now we are going to keep watching for a live one.
Posted by Gail Karlsson