When White Birds Are Blue


What sense does that make? If they aren’t always blue, why put the color in their name and confuse people? There are other ways to describe the bird – like by its size or diet or behavior. Maybe Quiet Wader, Lesser Longlegs, or Fiddler Crab Eater. 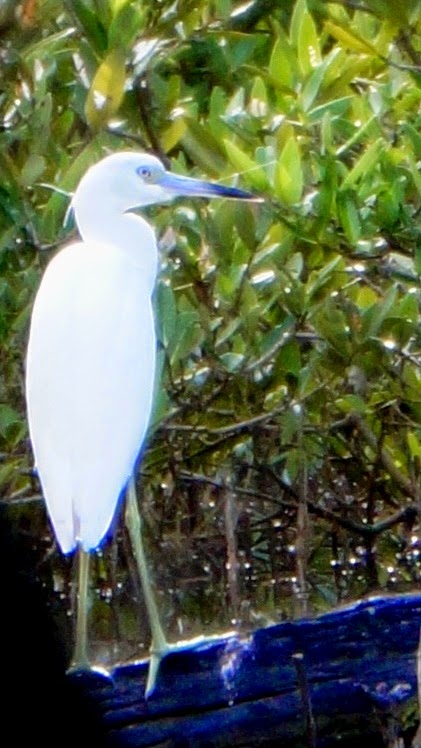 About a month ago I saw a pretty big white bird in the lagoon near Lameshur Bay. Viewing it from a distance I assumed it was a great white egret, but when I crept closer its neck seemed a bit short for a great white, and it was standing in an odd posture on a log. From a picture I was able to take with my telephoto lens, I could see that its bill was grayish with a black tip, and its legs were greenish-yellow.


A great white egret has a yellow bill and black legs.
Maybe a snowy egret? No – their bills are black and they have black legs and yellow feet.
After looking through my reference books, I decided the bird I saw had to be a Little Blue Heron in its white phase, even though it seemed pretty large compared to others I had seen before.
More recently I have been seeing a similar bird at Francis Bay. I was crouching in among the mangroves with my camera trying unsuccessfully to catch it with a little fiddler crab actually in its mouth when a young couple passed by on the road to the beach.
They saw the white bird too. “An egret” he told her confidently.
I was tempted to call out from the underbrush: “Wait. Don’t be so hasty. Notice the gray in the bill and the color of the legs”. But I didn’t think he would appreciate the advice – and who really cares about the names of the birds anyway?
The birds certainly don’t care what we call them. They just go about their business. They do care about the color though.
If a Little Blue Heron is white, that means it is a juvenile. Most likely it was born here, and is less than a year old. When it approaches adulthood, it starts looking mottled as darker feathers appear. Until it gets its full adult plumage, other birds know it is still immature and not ready to mate.

Until it gets its full adult plumage, other birds know it is still immature and not ready to mate.
I got to wondering what it would be like if people also turned different colors when they matured. When my sons were teenagers we learned that their brains wouldn’t be fully developed until they were 25. In the meantime, though they might look like grown men, they would likely still be somewhat impulsive and less equipped to make rational decisions. Imagine if human youngsters turned color when they were fully matured – and until then everyone could tell that they were still really juveniles. Embarrassing for them maybe, but useful information for the people around them.