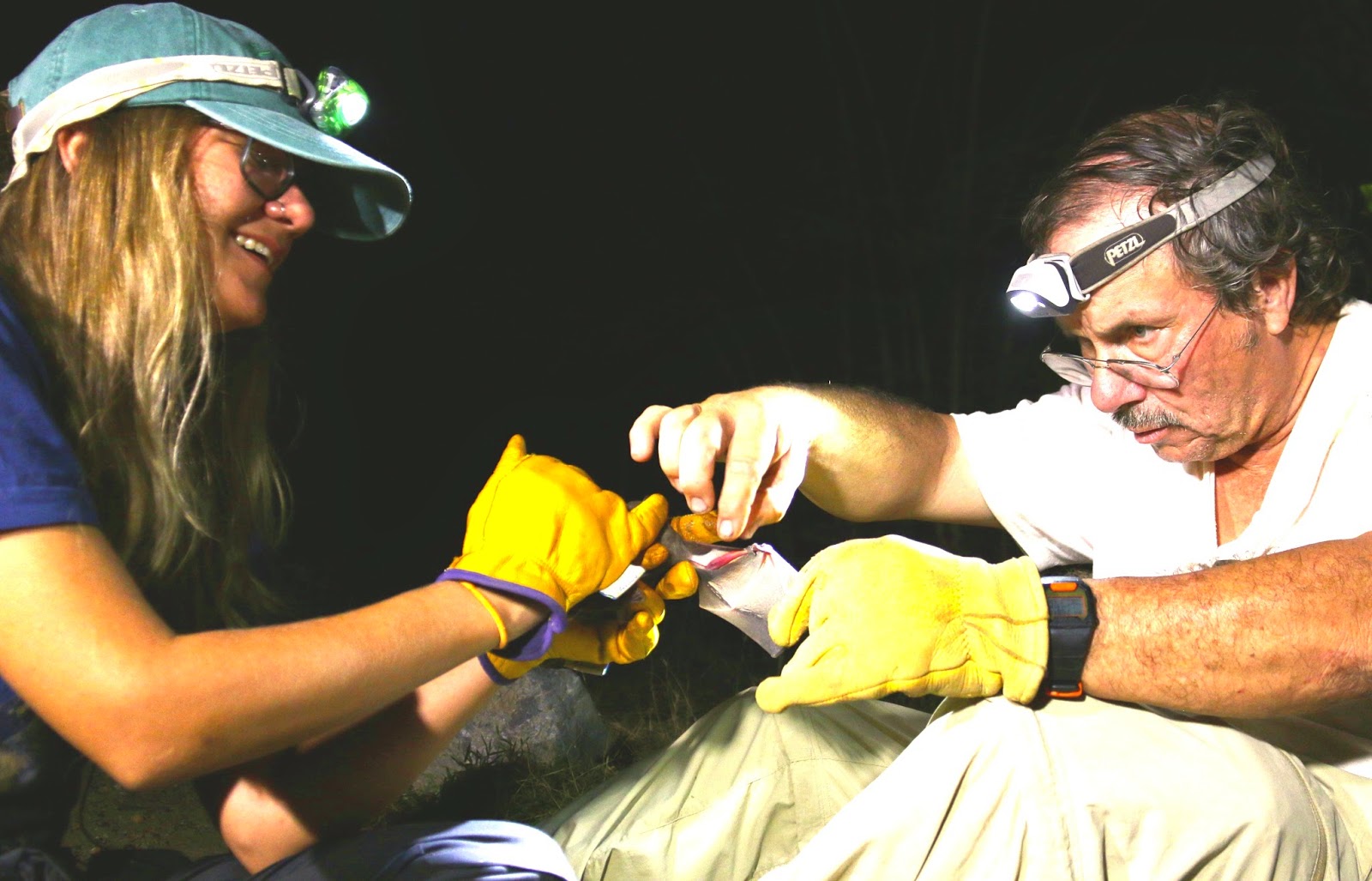 Richard Veit and Danielle Fibikar banding an Antillean cave bat. Photo William Stelzer
Once again, Richard Veit, a professor of biology at the College of Staten Island in New York City, brought a group of college students to St. John to examine the rich habitats surrounding the Virgin Islands Environmental Resource Station (VIERS) in Lameshur Bay. The area seems to be full of familiar wildlife (including over 60 types of birds), while also supporting newcomers and at least one species thought to have disappeared.


I met Professor Veit and two of his graduate students last April at VIERS and reported for the Tradewinds on their respective research projects: Danielle Fibikar is working on documenting the size and health of local bat populations, and Pearl Cales is studying different types of frog vocalizations, while also identifying changes over time in their density and distribution in certain areas of the island.


These researchers returned to St. John in November, and then came back again in January to follow up on their subjects, while the undergraduates in the Tropical Ecology Course were just getting familiar with the different birds, lizards, and crabs around Lameshur.


My husband and I, and local photographer Bill Stelzer, were excited take a trip out to VIERS and catch up with the research team to get an update about their findings. We set out along the road by the beach at Lameshur, where they set up fine-threaded ‘mist’ nets to catch bats flying along the roadway after dark. 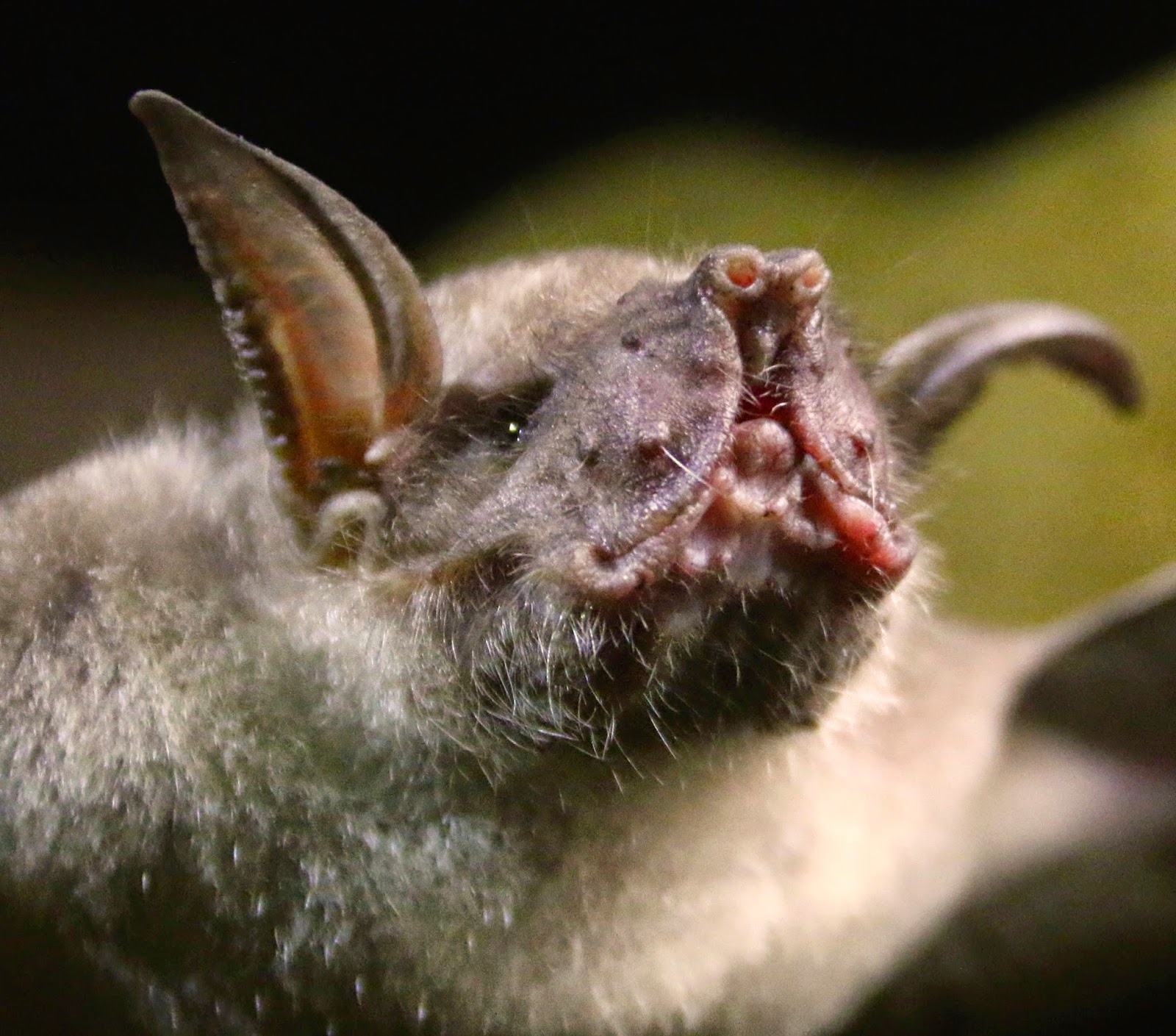 
The first ones caught were fishing bats, Noctilio leporinus, out for dinner. One of the fishing bats that got tangled up in the net had a familiar face – they had caught him several times before, most recently just a few days before. It was easy to tell because they put tiny metal tags on the wings of the bats before releasing them. Their re-catch rate shows that there is a fairly stable community of fishing bats in that area. The researchers also weigh and measure the bats. The one caught a few days earlier hadn’t grown in such a short time but turned out to be 8 grams heavier than before, probably because he had just eaten a small fish that evening before flying into the net. These bats fly low over the water in the dark using echolocation to locate little fish and grabbing them with the sharp claws on their hind feet. 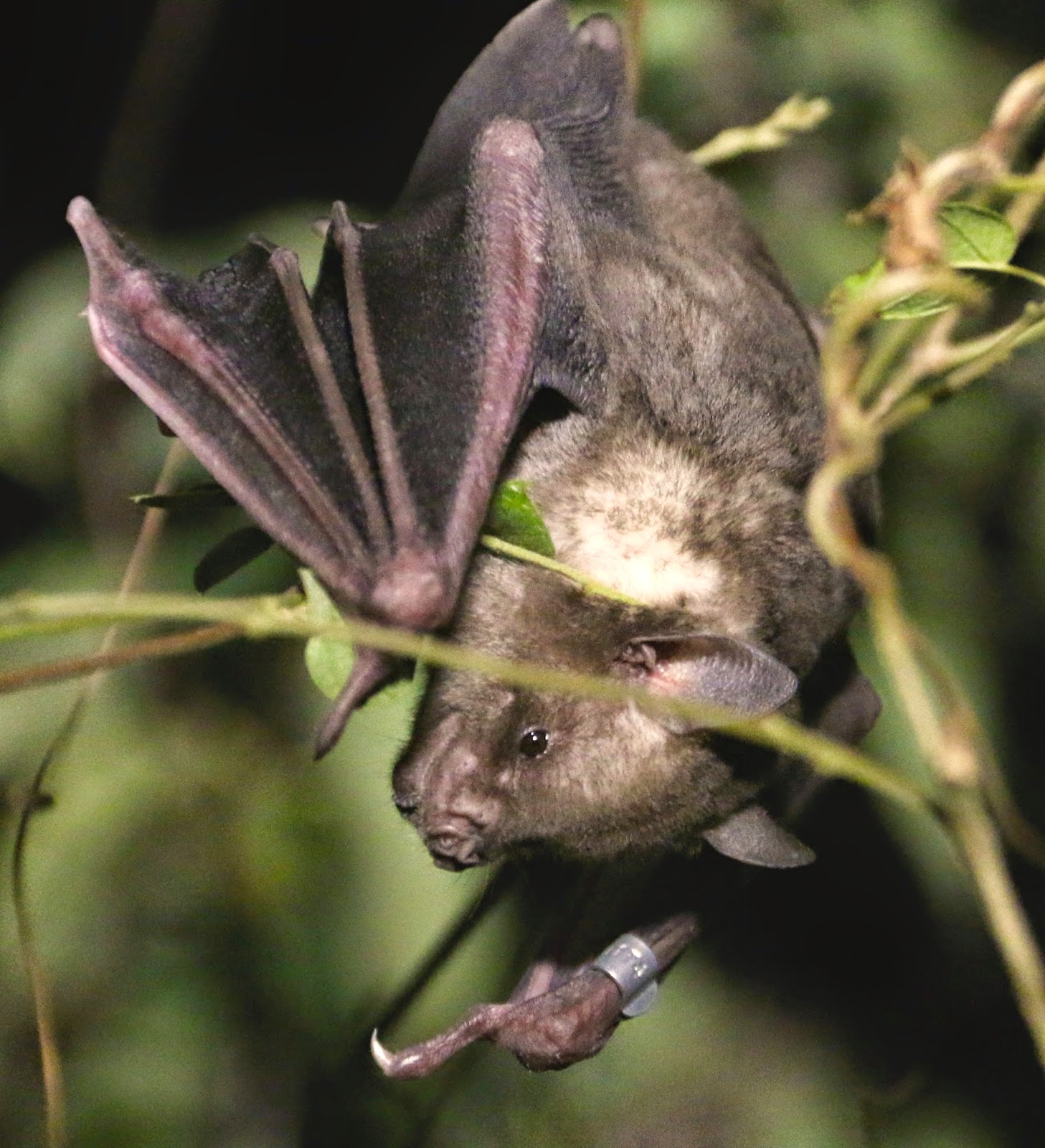 
The other bats caught that night were fruit-eating Antillian cave bats, Brachiphylla cavernarum, which seem to be getting more numerous on St. John based on the recent mist net counts and an examination of the buildings at the old Reef Bay sugar mill. These bats represented less than 10 percent of the bats netted on St. John by the Island Resources Foundation team in their 2009 survey (with Jamaican fruit bats, Artibeus jamaicensis, making up close to 75 percent of the total). The cave bats have been listed as a species of ‘Greatest Concern’ on the Territory's Endangered Species List, probably due to a limited number of caves for roosting and a general loss of habitat. www.irf.org/documents/VI_Bat_C%20&_M_Plan_December%2009.pdf


The researchers told us that one night they caught five different types of bats within a few hours – including (besides the ones already mentioned) a relatively common insect-eating velvety free-tailed bat, Molossus molossus, and a rare red fig-eating bat, Stenoderma rufum, which is only found in Puerto Rico and the Virgin Islands, and is also listed as a species of Greatest Concern on the Virgin Island’s Endangered Species List. During the Island Resources Foundation three-year survey, there were only 15 of the red fig-eating bats caught - out of 1,200 - slightly more than one percent of the total.
Meanwhile, Pearl Cales was chasing a Caribbean White-lipped Frog in the bushes along the road. It got away at one point and hid in a large puddle, but eventually it raised its face up to the surface of the muddy water and she was able to recapture it. She measured and examined it, then snipped off a tiny piece of its toe for a DNA sample to verify its identification (since the little frogs are difficult to distinguish with scientific certainty otherwise). 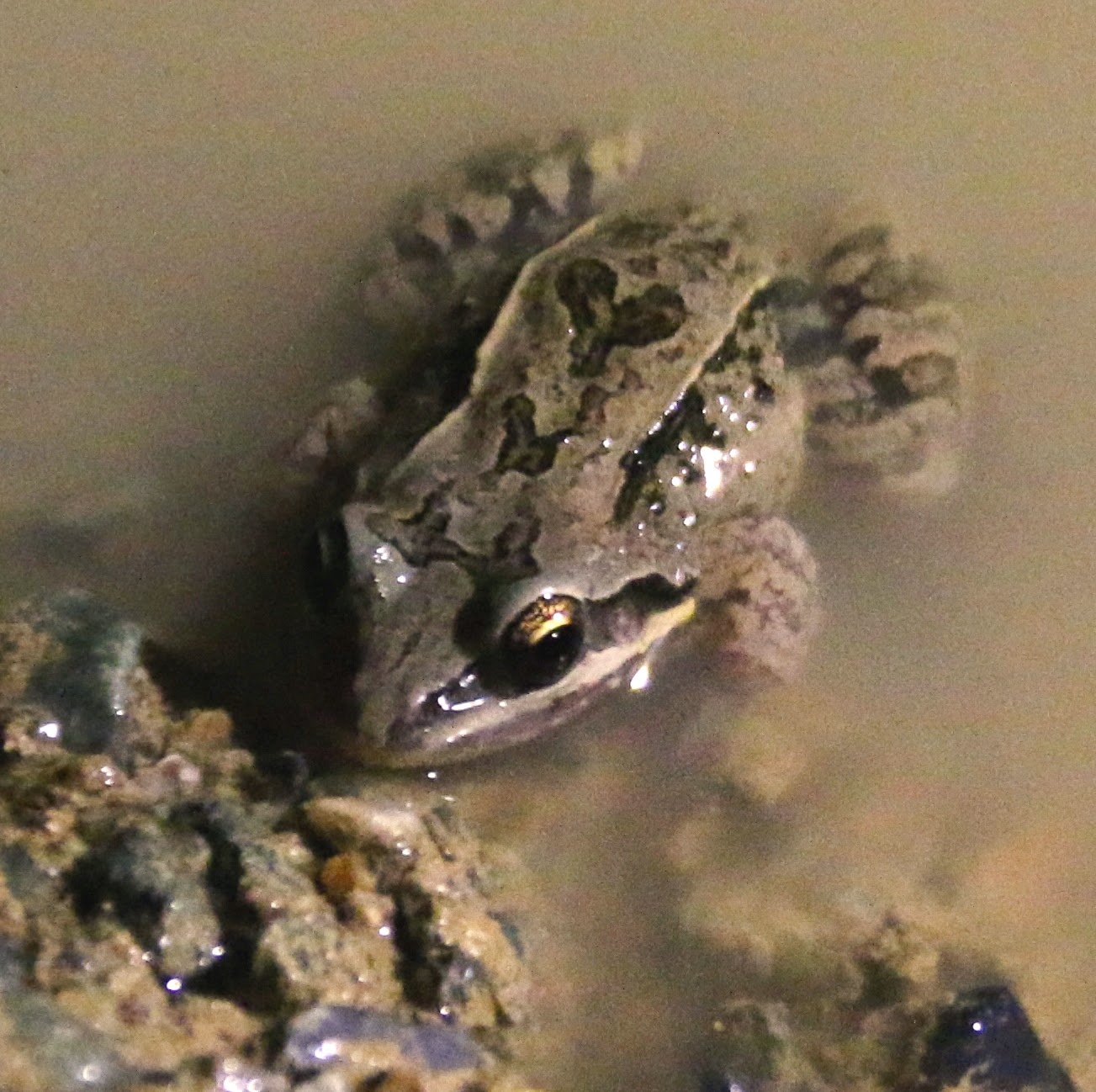 Pearl is focusing part of her research on documenting the different sounds made by the white-lipped frogs. She is also doing a survey of overall frog sounds at selected points to see if there are any changes. Mostly she is concerned about whether there has been an invasion of large cane toads, which could potentially eat up many of the local tree frogs. This year, she did find one cane toad in Coral Bay on the flat land near the site of the Roller’s farm. 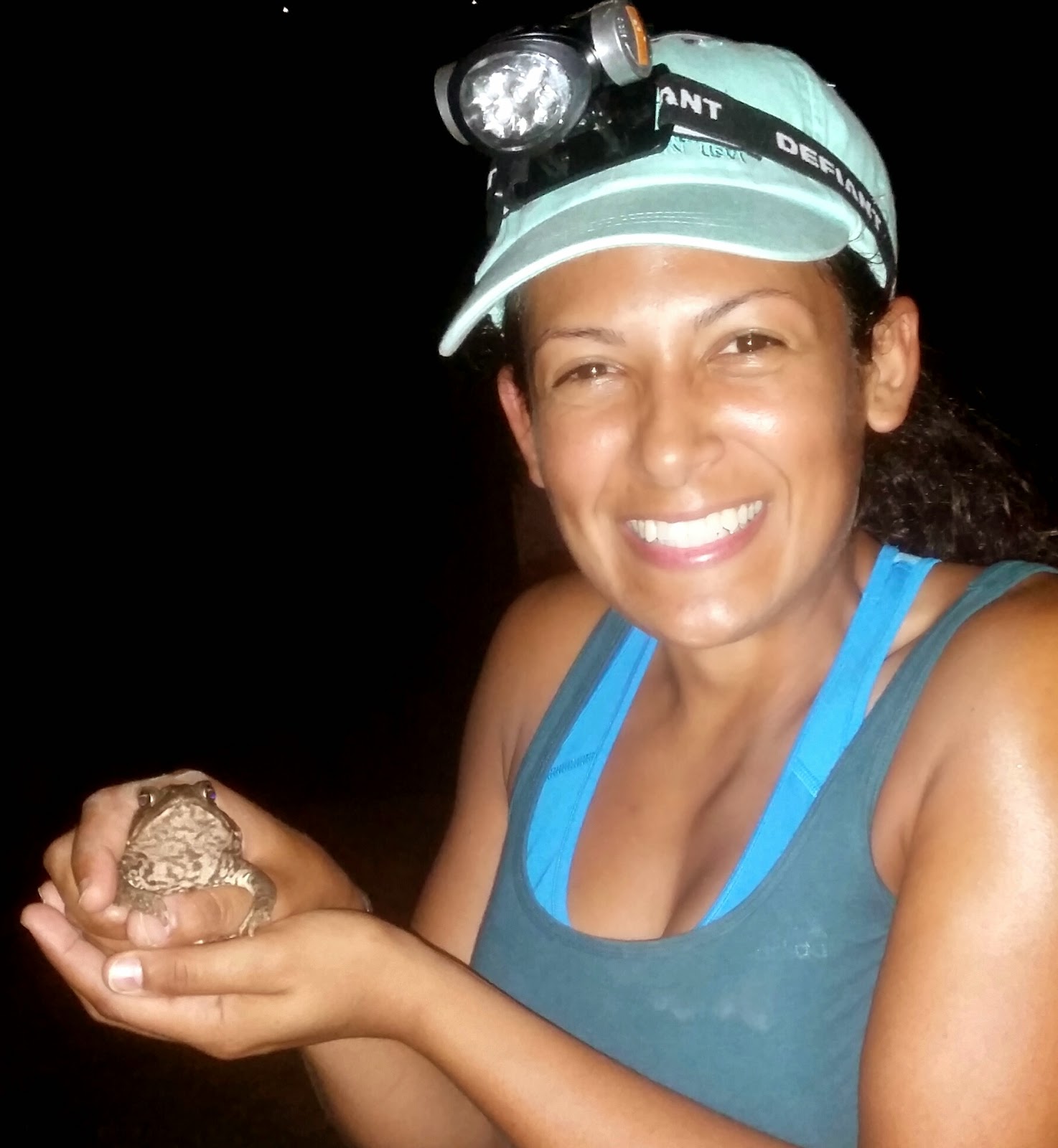 As a bird lover, I was pretty excited to hear that Professor Veit had also identified a rare bird in the flat area near Coral Bay – a screech owl, Otus nudipes, that has been found only in Puerto Rico and the Virgin Islands. In 1995, these birds were declared extinct in the Virgin Islands because a careful survey of the three main islands (which have the woody habitats they require) had turned up no evidence of them. I thought I had heard an owl in the night recently, and wondered if it could have been this type. Although the recorded common cries of the screech owl didn’t exactly match up with the hooting sounds I remember hearing, these little owls do apparently make loud ‘coo-coo’ sounds - as a result of which they were given the name “Cuckoo-bird” in the Virgin Islands. www.oiseaux-birds.com/card-puerto-rican-screech-owl.html


Professor Veit also saw another unusual bird in the lagoon near Lameshur Bay – a Little Egret. This bird is a Eurasian species that is in the process of colonizing the western hemisphere. They first nested in Barbados in 1994, where there are now 15-25 nesting pairs. That is still the only western hemisphere breeding location, but they have been recorded on many Caribbean islands including Puerto Rico, and have even been found as far north as Newfoundland. It looks like a snowy egret, but has two distinctive thin feathers at the back of its head.


In addition, he ran into four brightly colored Adelaide’s warblers, which are generally found only in Puerto Rico, along the south shore trail near VIERS. These sightings of rare birds were particularly interesting to me, since I was asked to lead an early morning bird walk at Lameshur during the Unitarian Universalist Fellowship retreat at VIERS. Meanwhile I have been practicing trying to identify the different bird songs and frog voices around my house.
Posted by Gail Karlsson