Falling in Love with Bats 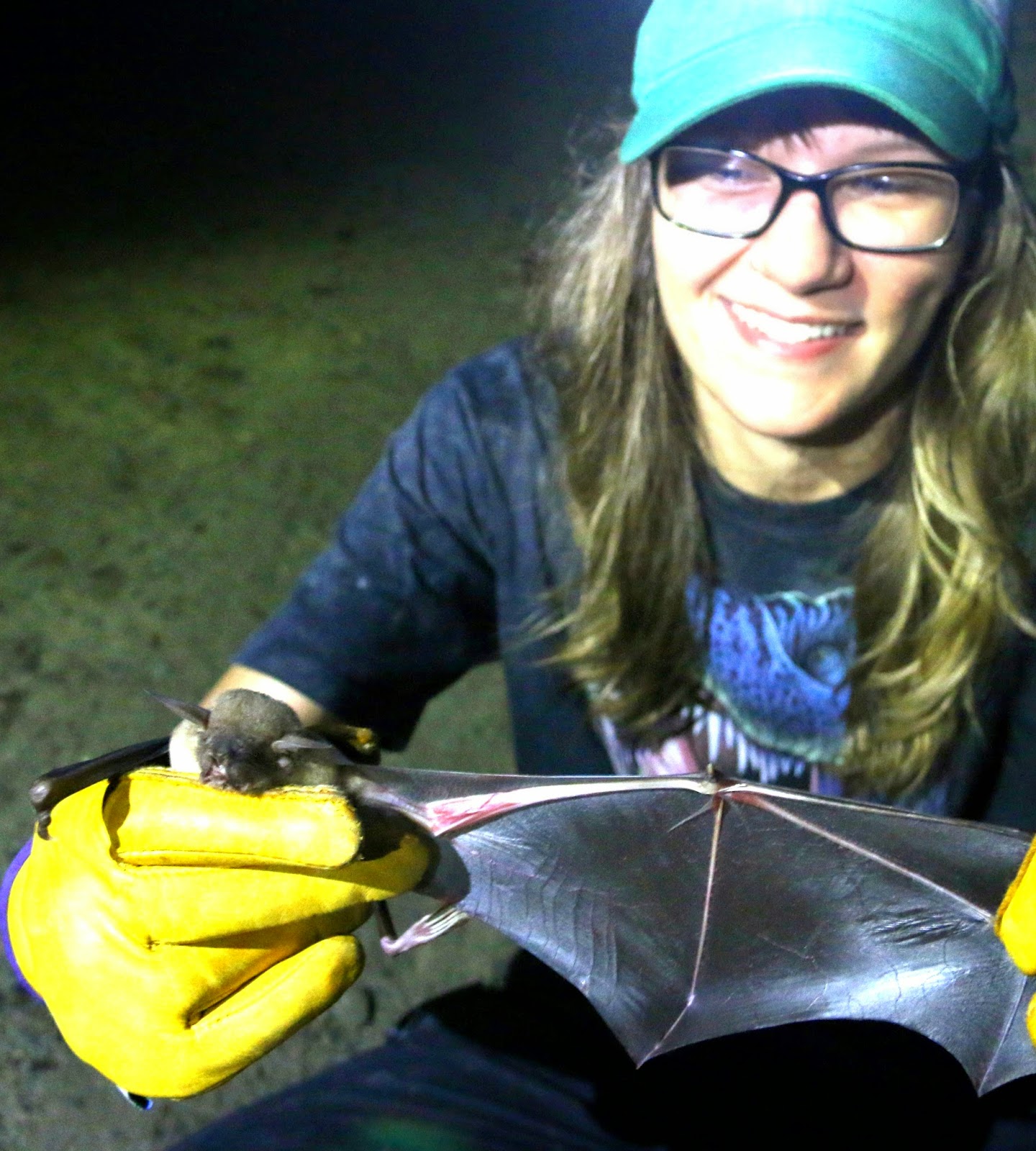 Danielle Fibikar with St. John fishing bat. Photo William Stelzer
Danielle Fibikar first came to St. John for a college course in Tropical Ecology at VIERS – the VI Environmental Resource Station in Lameshur Bay. During the day she was introduced to field research methods while studying lizards, hermit crabs and hummingbirds, but it was at night that she found her true passion – catching bats!


One of the course leaders was Richard Veit, a professor of biology at the College of Staten Island in New York City. In the evenings, he set up finely-woven ‘mist’ nets across the road through the forest in order to trap and study the bats flying by – then tag and release them. 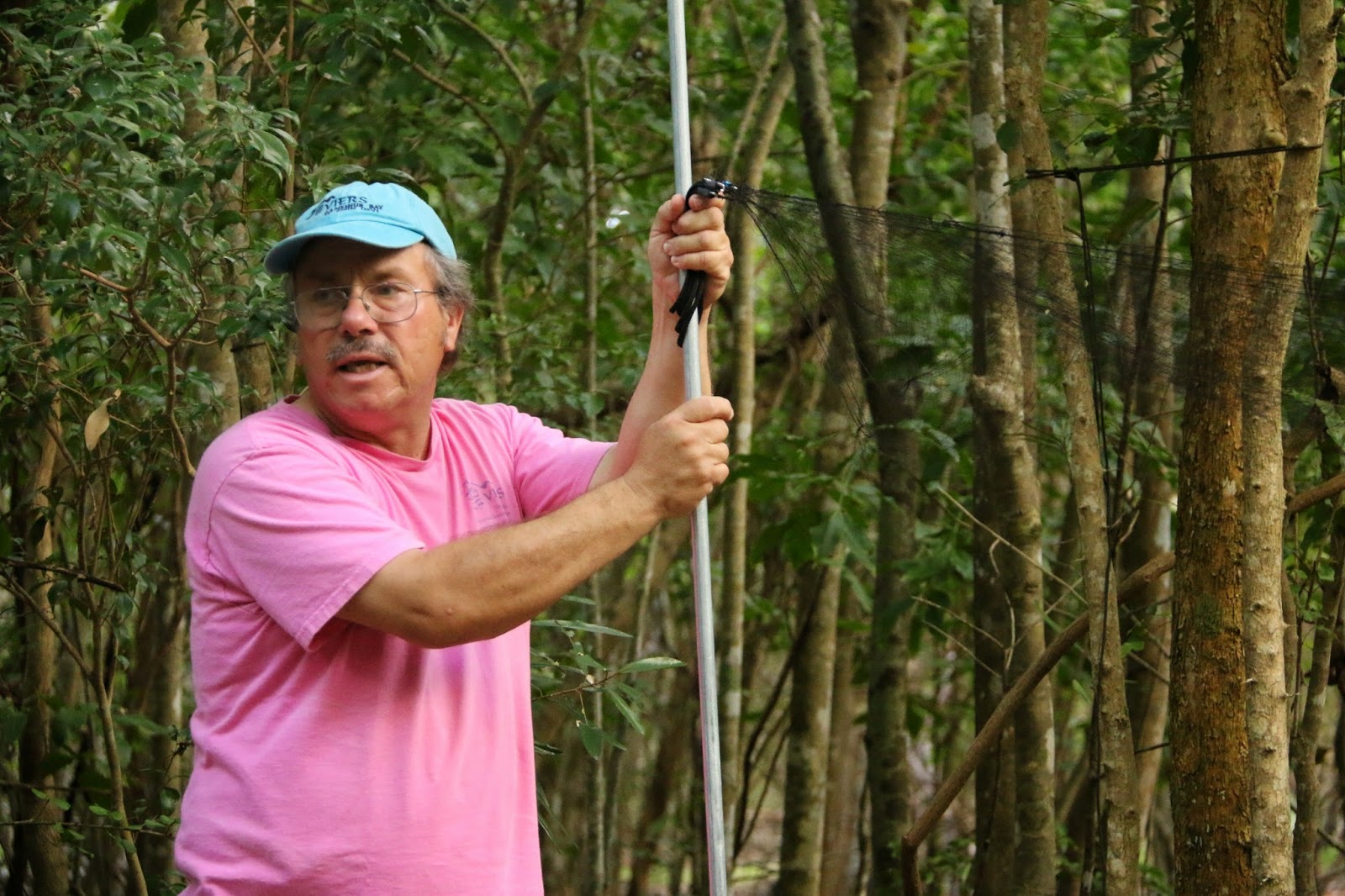 Danielle was hooked after she got her first close-up look at a large fishing bat with dark, silky wings (Latin name Noctilio leporinus). Back in New York she designed a plan for graduate research on bats in collaboration with Professor Veit.

Not many people are familiar with the different types bats on St. John – especially since they are mostly active after dark. A 2006-2008 mist net survey of bats on St John conducted by the Island Resources Foundation (IRF) identified 6 different species. The most visible ones are the velvety free-tailed bats that can sometimes be seen chasing bugs at twilight around people’s houses. The most numerous by far are the Jamaican fruit bats. You can usually see some of them roosting during the day on the roofs of the buildings at the old Reef Bay sugar mill, possibly along with Antillean cave bats. www.irf.org/documents/VI_Bat_C%20&_M_Plan_December%2009.pdf 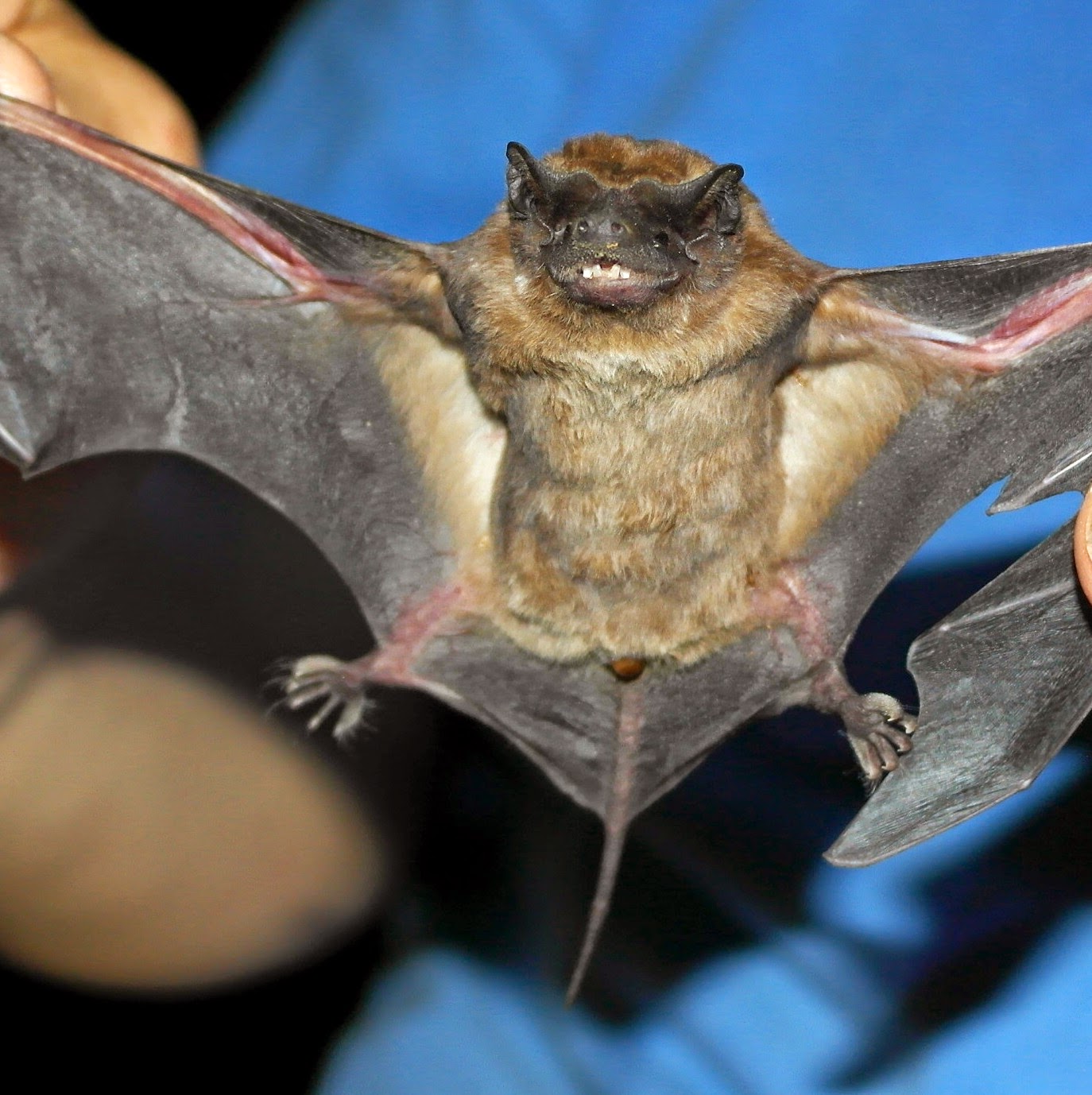 
One night when the IRF survey team was here they set up a mist net across the Fish Bay gut, and I went out to see what they caught. That night I got to touch a pregnant fruit bat. Afterwards I was inspired to read about tropical bats, so I was very excited to meet the researchers from Staten Island at VIERS, where I was attending a retreat organized by the Unitarian Universalist Fellowship.


The first night the whole UU group went out and waited along the moonlit road to see what the nets would catch. I felt a mystical thrill when, after we had been sitting in silence and anticipation for what seemed like a very long time, one of the large fishing bats suddenly swooped past us, the moonlight shining on its wings – and then flew right over the net.


I went back to VIERS again a couple of times while the Staten Island researchers were there because I really wanted to see one of the fishing bats close up. When I finally did, I could understand why Danielle found them so attractive. Dark and strong, they remained dignified even when being captured and examined. She crooned to them lovingly while measuring them, tagging them, and taking samples of their hair (to test for mercury from the fish they eat). 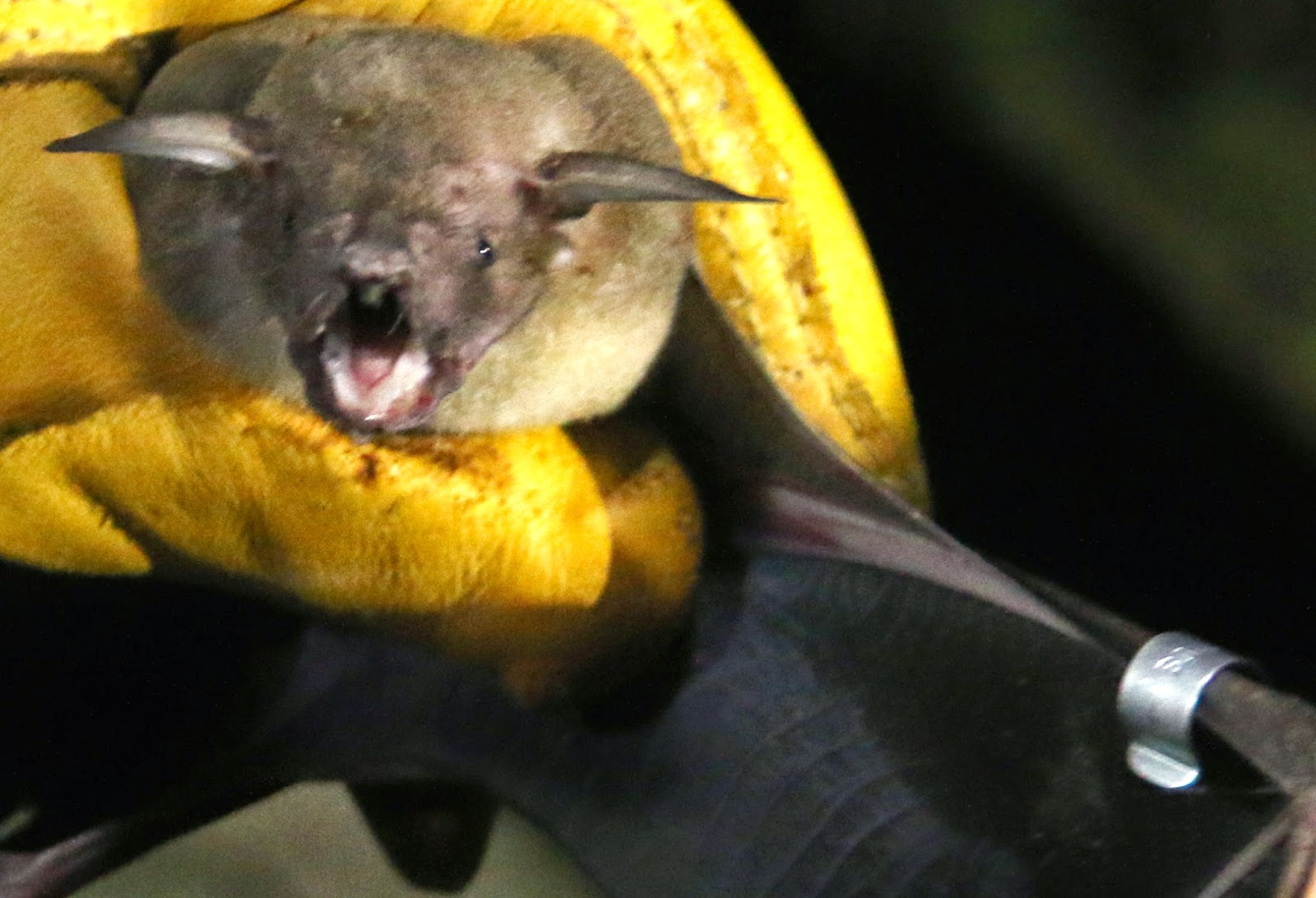 
The research she and Professor Veit are doing on St. John ties in with their work in New York on white-nose syndrome, a fatal fungal disease threatening the survival of cave-roosting bats. It was first found in a cave near Albany, New York and has spread widely across eastern North America. The fungus is thought to be unable to tolerate temperatures above 68 degrees Fahrenheit, but if they find that the spores are carried on the hairs of migrating bats during the warmer summer months, there is a possibility that it could be transported and spread into warmer locations.


I asked my photographer friend Bill Stelzer to come along one night to VIERS. I knew he would be interested because when we were both doing volunteer work with the National Park archeologist Ken Wild, Bill once spent the night by the Reef Bay petroglyphs to see if he could see bats there. Ken’s archeological research indicated that the stone carvings by the freshwater pool were made by pre-Colombian Taino people and represented the bats drinking there – which were viewed as important links between the human and supernatural worlds. www.friendsvinp.org/documents/Petro0204.pdf


The Staten Island researchers also went to the petroglyphs pool and found 5 red fig-eating bats there, apparently attracted by the ripe fruit from a strangler fig tree. These bats are quite rare, and endangered due to land development and habitat loss. During the three year IRF survey, only 10 were seen on St. John, out of a total of over 500 bats netted. The IRF report recommended actions in the Virgin Islands to protect remaining forest land and replant native fruit trees, and to educate people about conservation of local species. (Bats are the only native mammals in the Virgin Islands.)


Bats serve ecologically critical roles in pollination and seed dispersal, and the mosquito eaters near houses certainly also provide a valuable service to people living there. But I don’t think their true significance can be measured in terms of bugs and seeds and pollen.


People tend to react emotionally to bats. Some are afraid, thinking about vampires, and warnings from grandmothers about bats getting caught in their hair. Others are attracted to their wildness. They remind us of the life forces that remain mysterious and untamed, and maybe also draw our own wild spirits out of the shadows. 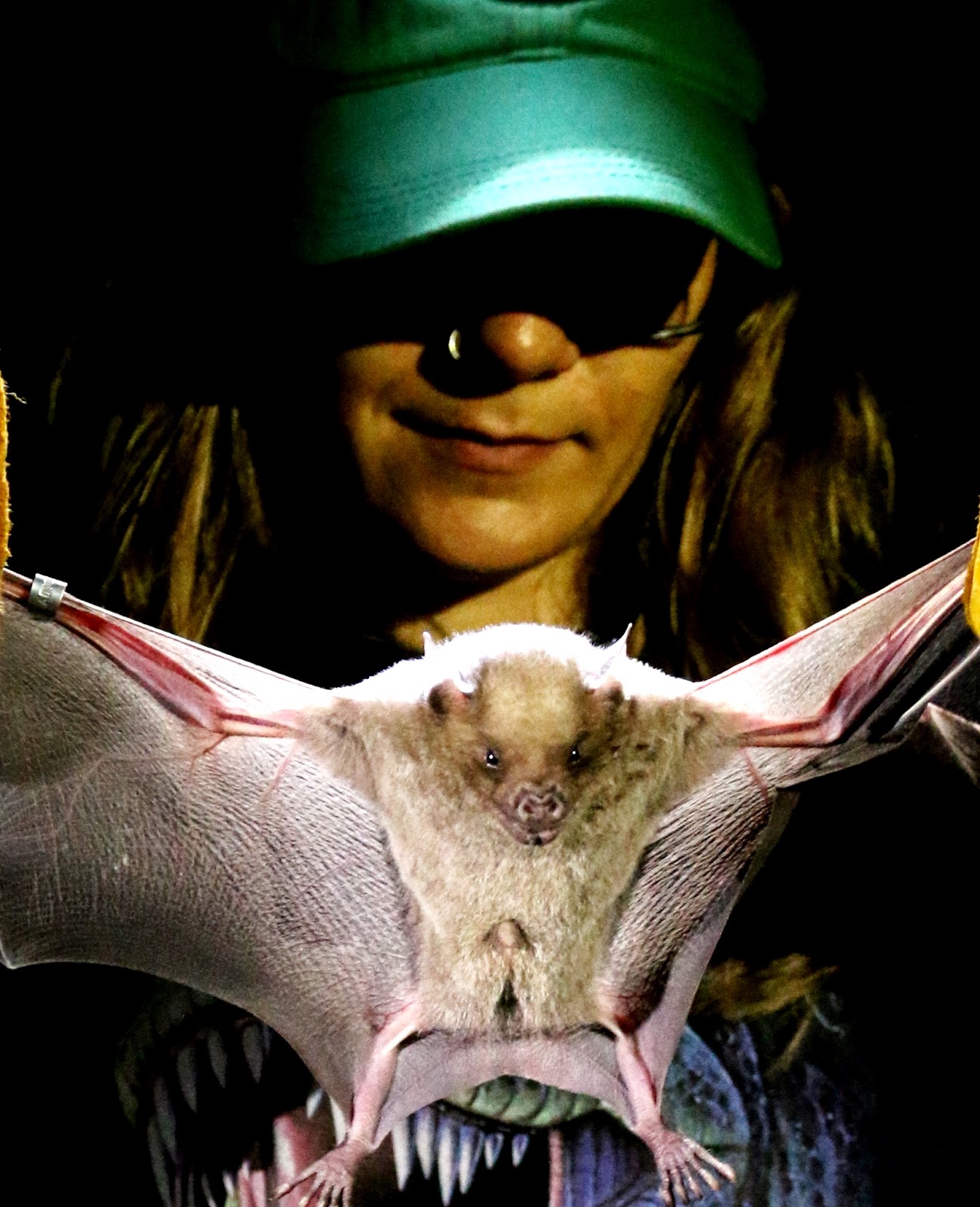