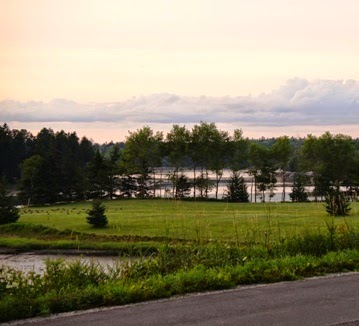 Some landscapes seem to become imprinted on your soul - especially when they are filled with childhood memories. These are places you keep coming back to in your dreams, even though sometimes you actually return to find them changed beyond recognition by new roads and buildings.


It has been a great blessing for me to be able to return to Watts Cove in St. George, Maine, summer after summer and find it essentially undisturbed. 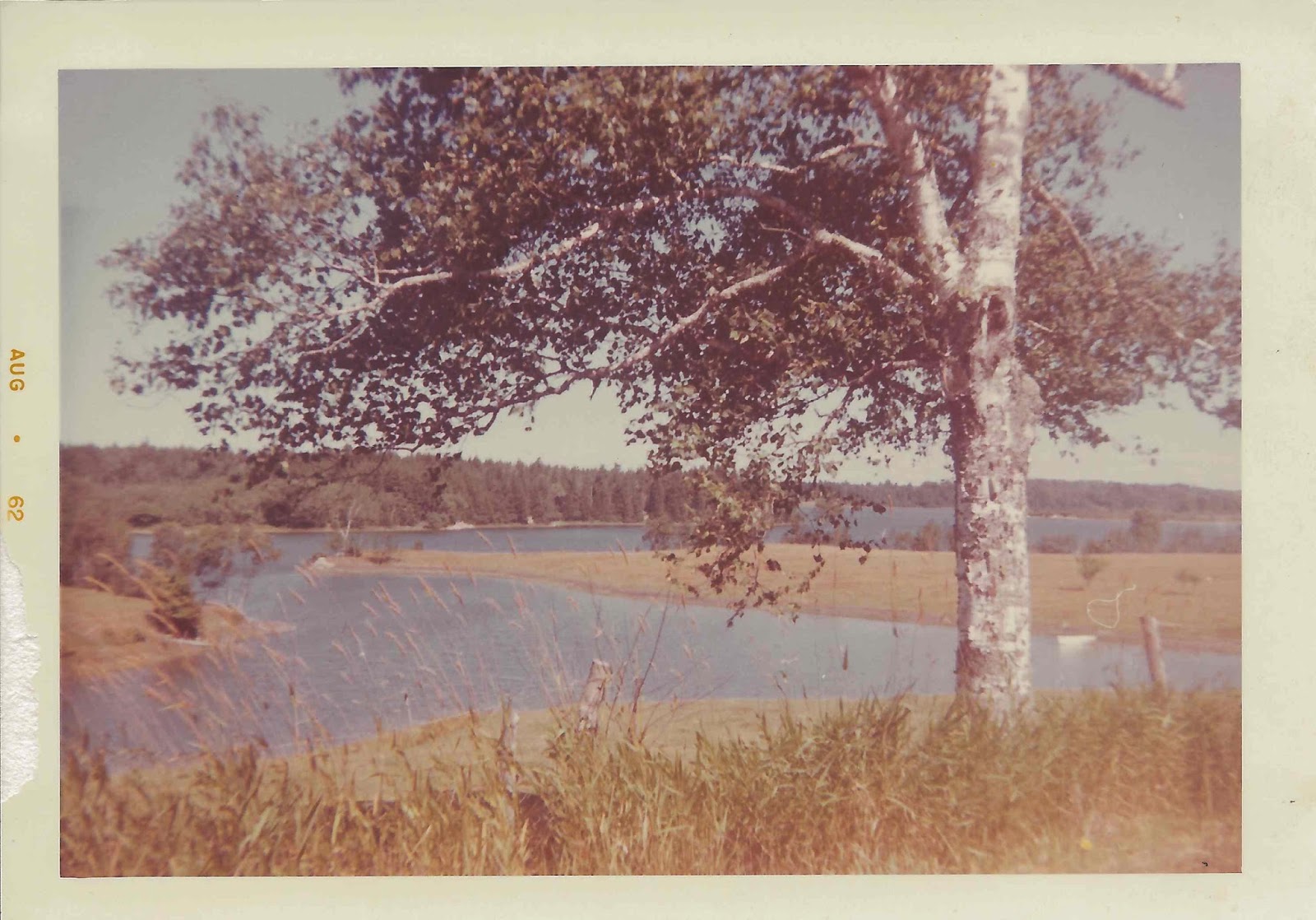 When my brothers and I were young, the field south of this part of the inlet off the St. George River belonged to Harold Watts, who sometimes pastured his dairy cows there. Earlier members of the Watts family built a dam across the channel, harnessing the tides to power a saw mill and grist mill. 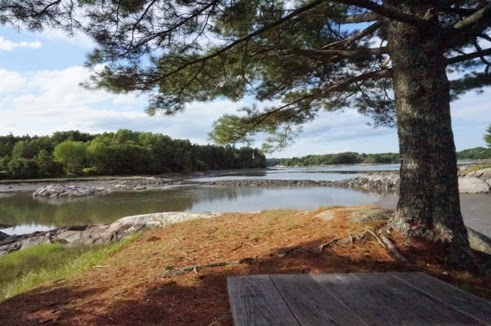 Mid-tide - showing dam across the cove
Our land by the cove is on the south edge of the field, along boundary lines established around the time of the Revolutionary War.
Whenever I come back to Maine and see the cove I experience a profound feeling of homecoming, of being where I belong, even though I actually live far away most of the time, and always did.


My mother left St. George for a job in New York City, so we were raised in Manhattan. But we were lucky enough to spend every summer at the old Pierson farm up on the hill above Watts Cove, where my grandfather grew up. 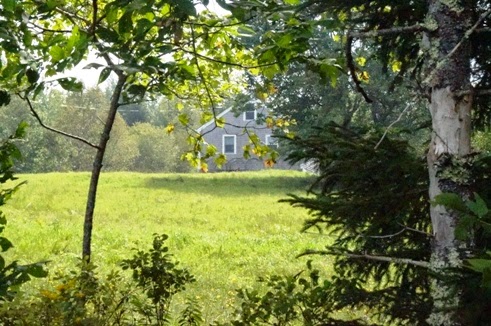 It was a place that provided us with almost magical opportunities for unsupervised play and exploration, as well as a deep sense of family roots. I still often think of it as a possible safe haven when the world seems threatening or overwhelming.
Although the dairy cows have been gone from Watts Cove for over 50 years now, the lay of the land and water remains the same, and I am grateful to the Shorb family for allowing me to walk freely through what is now their field.  I find new pleasures now in observing and learning more about the place and its wildlife, while also recalling treasured memories from earlier times.


One year we built a raft out of boards from an old shed and our father launched it at high tide near the large, sloping rock at the point on the south shore. We had a few exhilarating moments balancing on it before, all too soon, it sank to the bottom. Other times, when the tide was low, we dug clams and collected them in my grandfather’s wooden hod, our legs painted black by the stinky mud. We also foraged for raspberries and blackberries, and collected apples from the old tree along the road.
Some years my brothers and other boys from the neighborhood helped take care of Harold Watts’ cows, which occasionally were allowed to graze in the lower field near the water. At milking time they would have to be driven back through the wooden gate, across the road and up the hill to the barn. 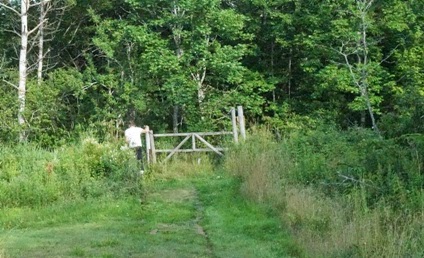 On a night when some teenage boys were visiting and no parents were home, we heard cows munching grass right outside our house. It turned out they had broken through a fence, and some of them were heading off down the hill. We set out with flashlights to round up the escapees and make sure they didn’t wander into the road. For me, the giddiness of that wild cow chase culminated in an unforgettable first kiss during a slow walk back up the hill in the moonlight. 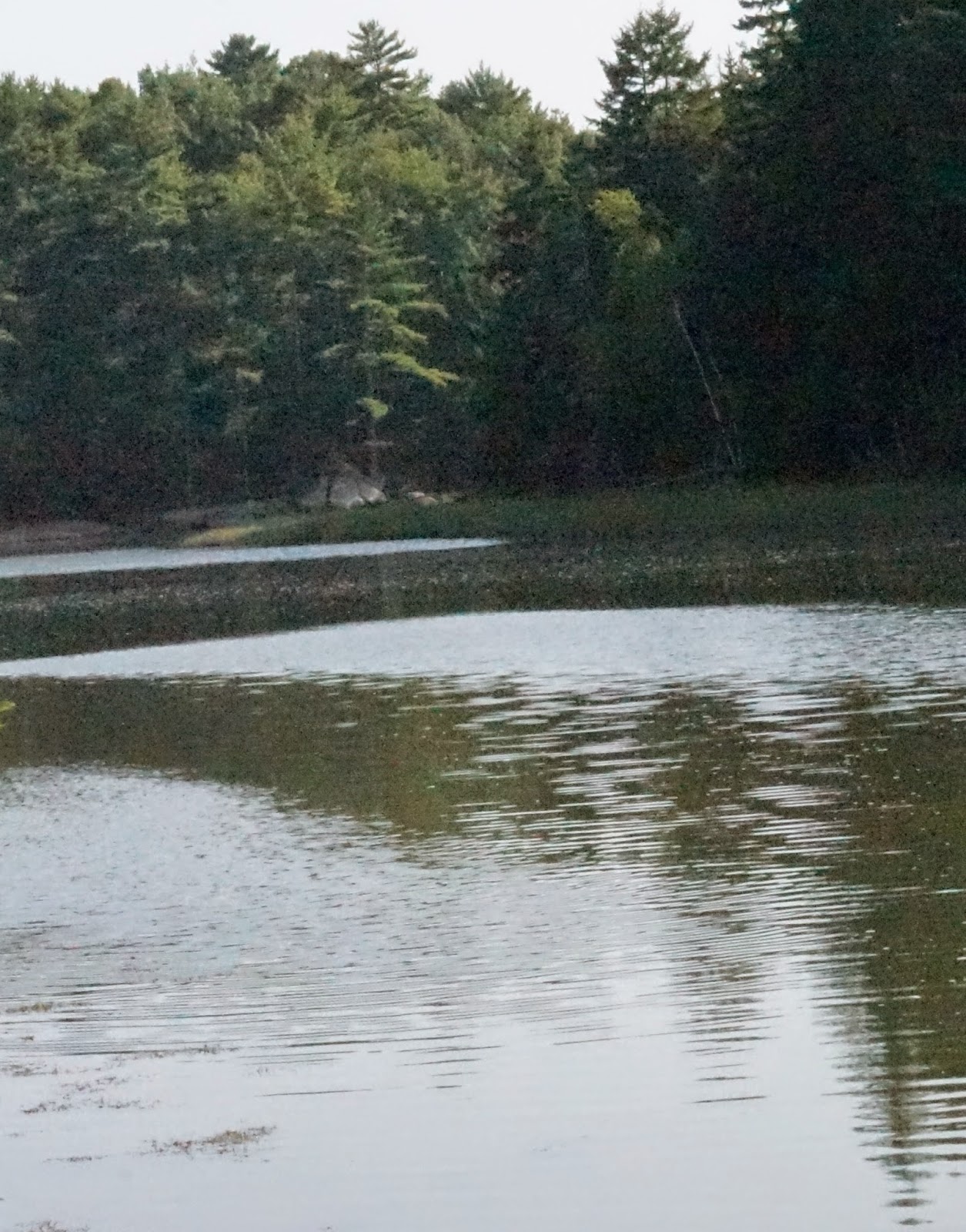 After college, and a long time away from Maine because I had to work during the summers, I brought friends up to share my remembered childhood joys. At the end of the path through the woods down to the water’s edge, we climbed high up in a spruce tree, surprising a family of red-winged blackbirds and surveying the dark bank of trees across the way on Taylor Point, which to us was mysterious, unexplored territory.


When I first brought my husband to Maine for the summer, there was an unusual profusion of blackberries near the apple tree along the road by the entrance to our path. He went off for a run and returned much later with scratches on his arms and stains on his mouth and shirt, flushed with berry 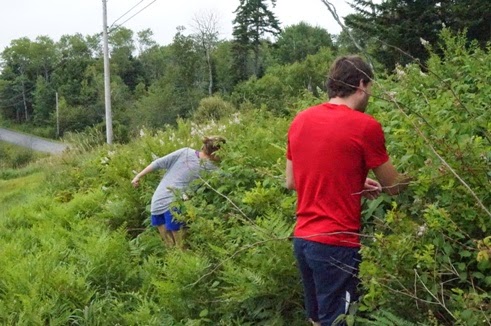 fever. Later, our sons discovered for themselves the pleasures and perils of wading into enticing thickets of berries.
The older one and I also gathered imaginary provisions down by the picnic table when we played ‘Gilligan’s Island’. The big rock was alternately the boat or the deserted island where the passengers were marooned, and there were plenty of pinecones, shells and leaves available for us to use as makeshift supplies. 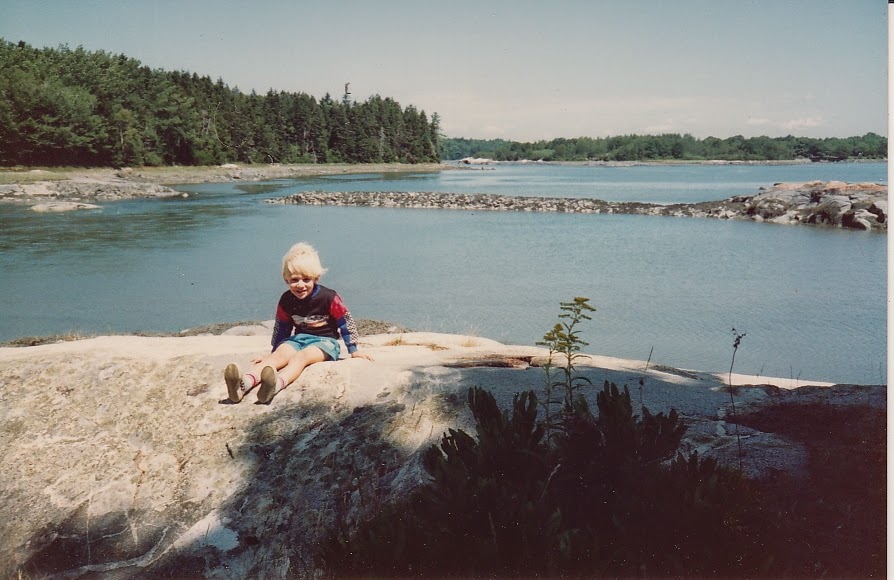 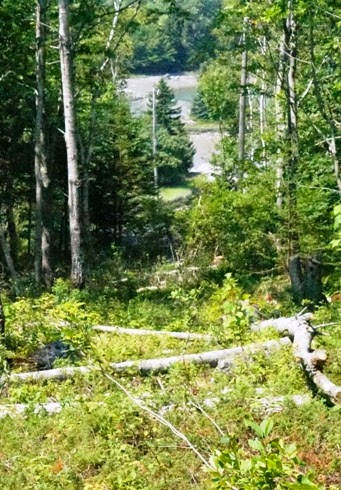 Last summer, we cleared a space through the trees to create a view of the cove from our house. My mother had always talked about wanting to be able to see the water from the kitchen window, but when we were small the woods around the house had seemed impenetrable. Now, virtually every place can be viewed on Google Earth, and an aerial photo allowed us to identify a narrow, partially treeless area that could be opened up to provide a glimpse of the cove and the mill dam.


Then, after spending almost a month in Maine, I went off on an unexpected and somewhat disheartening business trip to China. While I was there, I kept finding myself wishing I was out for a walk looking at birds around the cove, and felt a powerful yearning to be safely back there. When I returned from China, I almost immediately went back to Maine, and spent a few days taking photographs in an attempt to capture the sense of peace and connection I felt there.


I imagined a time when I would no longer be able to walk up and down the hill but would sit in my chair and look at these pictures and feel content recalling a place where I felt fully alive: 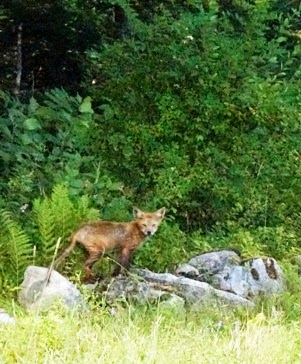 remembering the light angled across the fields or sparkling on the water, the songs of unseen warblers, and the unexpected excitement of a fox running out of the raspberry bushes or a startled heron flying overhead.
Everyday wonders of the world. 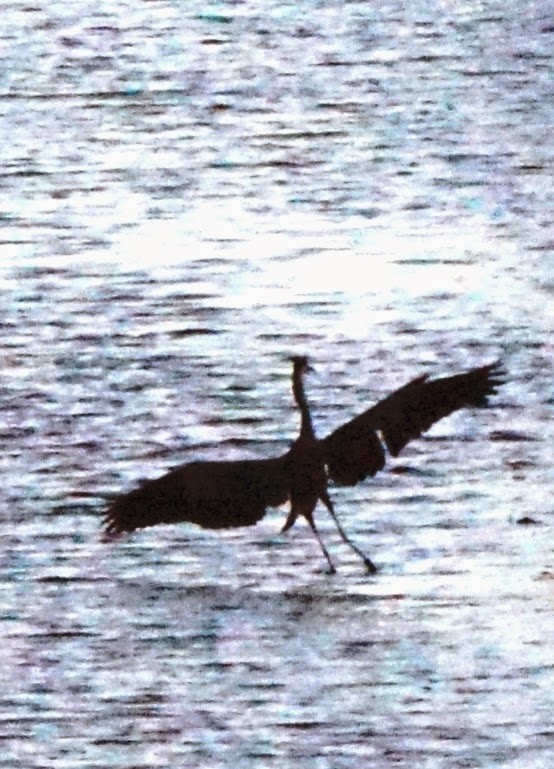 To view the full booklet of photos, click on this link:
https://drive.google.com/file/d/0Bxh_m5KMwyOfZjROZm1FVUZWdGs/view
Posted by Gail Karlsson