Hooked on Herons: Confessions of a 'Citizen Scientist' 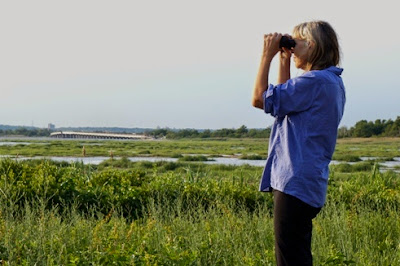 When I first stopped by  NYC Audubon this past May, I didn’t realize I was in danger of developing a serious addiction problem. You may scoff, but first hear my story.

I was initially exposed to herons in the Caribbean, and soon found myself searching for sources closer to home. Not so easy in Manhattan, though I did once spy a couple of great egrets by the pond at the south end of Central Park.

Then one day a friend passed me a copy of the NYC Audubon newsletter and I saw a notice about a Harbor Heron Foraging Study training—that very night! Hours later, with high expectations and a sense of destiny, I found myself in a small room cluttered with bird books. About 15 of us sat quietly on folding chairs, nervously checking each other out, not sure what to expect.

Before long an enthusiastic ornithologist came in and started her sales pitch. She showed us enticing images of wading birds on a big screen, and told stories about enchanted islands in New York harbor where hundreds of herons came to meet lovers and build their nests. Of course, these islands were off-limits to the uninitiated. But we could get a taste of the excitement by agreeing to check other sites in the City for possible heron traffic over the summer. When the sheet came around, I signed up without hesitation—not even stopping to read the fine print about protocols, reports, and data entry. Finally I was going to get access to lots of herons, and it was all for science! I chose the Jamaica Bay Wildlife Refuge as my site, mostly because I knew I could get out there on the A train.

As the time came to get started I got nervous about doing it on my own, so one of the staff members went along and showed me how. Made it seem so easy. Nothing to worry about.

At first it was just an occasional thing. More talk than action. Then they sent me a CD to show my friends. My husband and a few others got interested and wanted to try it too. Before long, we were on the A train every weekend, spending hours going from one point to the next in the refuge, searching the ponds and marshes, hoping for the big score.

It was mostly egrets for me: great and snowy. I also loved the night-herons, but those were mostly off our official route and so off the record, when we crept into the bird blind by the East Pond. One self-satisfied couple we met on the path said they had seen 86 black-crowned night-herons back in there, but we never caught sight of more than a few at once.

When I was out of town I missed my heron fix. I started looking for them everywhere. Even smaller birds would do when I felt desperate: a belted kingfisher at my friend’s house in Rhode Island; puffins in Maine. On a business trip to Nanjing, China, I hardly saw any birds at all, and had to make do with images of cranes woven into silk tapestries at the city museum.

By fall, my work performance and my social life had both suffered. If friends weren’t excited about going bird-watching or admiring my pictures, I had no time for them. I lost interest in my reports for work, and only wanted to write about birds.

Then I started hearing voices. At the end of September there were large groups of egrets gathering on the east pond over by the subway tracks, getting ready to migrate. They chattered amongst themselves and then one called to me: “Come south with us, where it is warm all winter. It will be fun.” I knew they were right. I didn’t want them to leave. I wanted to go with them. I couldn’t face the long winter in New York, with only the pigeons on my windowsill for company.

So I listened to the egrets and followed them down to the Caribbean. As I write this, I can see four great whites and a snowy roosting in the mangrove trees around a small pond. A great blue heron just flew past, and noisy green herons cackle whenever anything moves. No, it is not just a fantasy. It is real—but a potentially risky journey.

My message for prospective heron watchers is this: “Beware. There is a dark side to this habit. Once you get a taste for it you can become hooked, and find yourself in a position you would not have expected when you first set out with your binoculars and survey sheets—willing to give up everything to satisfy your constant need for herons.”

Gail Karlsson is an environmental lawyer and UN consultant, and author of The Wild Life in an Island House. She can be reached at gkarlsson@att.net.
Posted by Gail Karlsson