Many VI Winter Birds Are Summer Nesters in the US 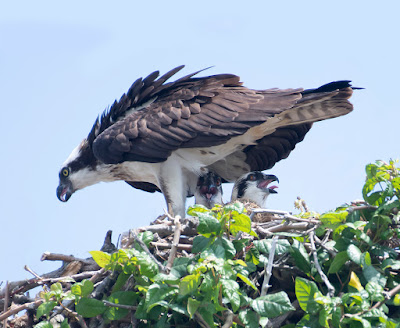 An osprey parent provides some shade for the chicks on a hot afternoon.

Ospreys, great blue herons and many ducks and warblers are all regular winter residents of the Virgin Islands, but many of them go to the northern United States to breed. It is fun to see familiar birds from the islands when we are up north, especially if they have nests and babies.

Osprey nests are the ones I notice the most, since they are enormous. Around New York City, I have seen osprey families on the tops of chimneys on abandoned buildings out in the harbor, and on specially built platforms in Jamaica Bay. 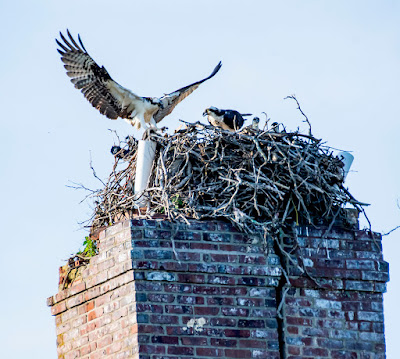 Ospreys make large, solid nests that they reuse for many years.

The female osprey will usually lay two or three eggs in late April or May, which should hatch in about a month. Ospreys like to eat freshly caught fish, and the male provides most of the food for the family during the egg incubation and parenting time, sometimes providing up to ten fish a day. When the chicks get bigger, the mother will also do some of the fishing. 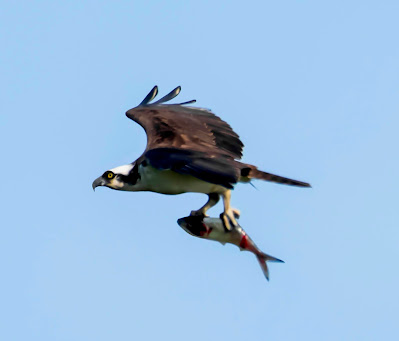 There are plenty of fish in New York harbor, but it is taxing work to catch so many of them. The chicks may have to wait until after the hard-working parent eats part of the fish first.  The adult ospreys will often carry their catch to a tree out of sight in order to have a peaceful meal before delivering the leftovers to the kids. 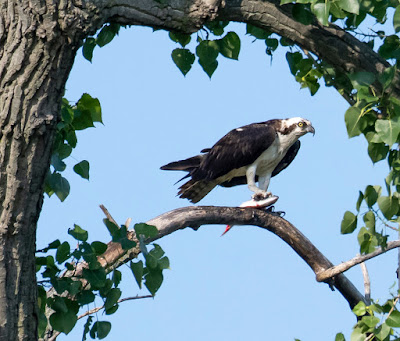 An adult osprey eats first in privacy before bringing the rest of the fish to the family.

It takes a couple of months for the young ospreys to learn to fly, and they will still rely on their parents for food for quite a while after that. In the fall, after the young ones can catch their own fish, the family will begin moving south for the winter. They don’t travel together though. The young ones usually leave after their parents, and respond to internal signals that guide them about when to leave and where to go.

Great blue herons also visit the Virgin Islands during the winter, frequently appearing alone along the shorelines or lurking in the mangroves and wetlands. 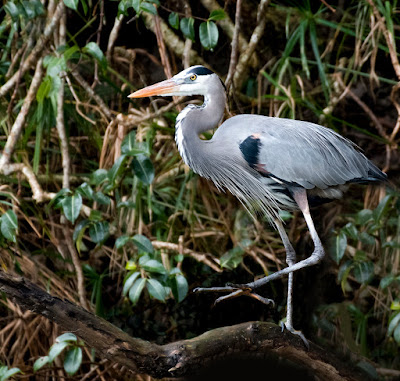 A great blue heron creeps along the edge of a hidden island pond.

The herons, too, mostly eat fish, but catch them very differently from the ospreys. Rather that diving down into the water from on high and flying off with their prey in their talons, the great blue herons usually stand very still in shallow water until unwary fish come within reach – and then quickly grab their victims with their long bills. 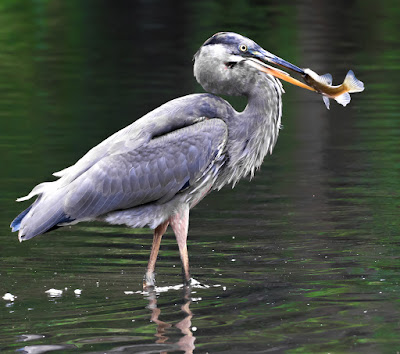 A great blue heron will stand in the water and grab fish passing by.

Though solitary in the winter, during the summer the great blue herons make their nests in large groups called colonies. These are often located in remote places, but the nests I saw recently were on an island in the Mississippi River very close to downtown Minneapolis. This tree had no leaves, so it was easy to see all the nests in it. There were nests in some of the other trees on the islands as well, though not as clearly visible through the leaves. I was thrilled to get to see these dramatic birds all gathered there.

Although the individual heron families stay in their own separate nests, being together in a cluster can provide some protection from would-be predators. Nesting on an offshore island will also reduce the threats from land-based intruders. 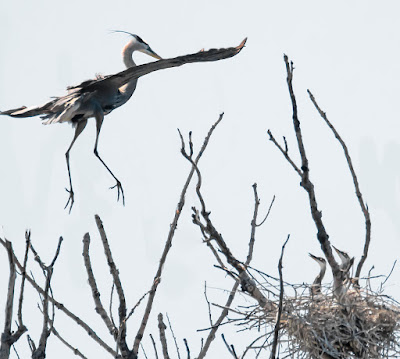 The young great blue herons stay in the nest for about two months. The parents feed the chicks by swallowing fish and then regurgitating when they get back to the nest. As the chicks get older, they can get very aggressive and competitive about getting the food. 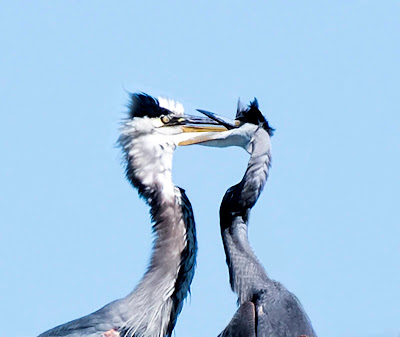 Many smaller winter migrants, like Black-and-white Warblers, Northern Parulas and American Redstarts, also make their nests in the northeast. They tend to be well-hidden, though, and mostly breed in forested areas.

I haven’t yet seen any of the warblers raising their families, but it would be fun to learn more about their breeding lives too, and why they travel so far to find the right places for their nests.