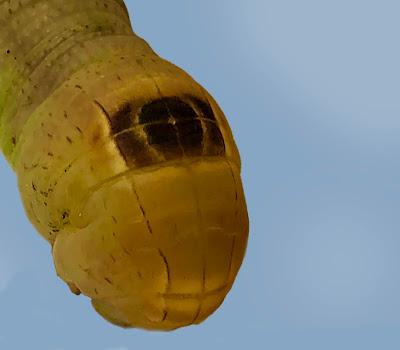 I was thrilled when my friend Cheryl sent me a photo of something unusual that had landed on her front step. What could it be?

Actually, I could see right away it was a fat green caterpillar. But I had never seen one like this before. It was close in size to the large striped caterpillars that eat all the leaves off the frangipani trees, but was mostly green, except for a dark band across its face that expanded to look like one big eye in the center of its forehead. Below that was something that looked like a mouth, but wasn’t. Weird.

Its green body looked similar to a horned caterpillar I once saw on a sugar apple tree, but this one had a smoother shape and only a tiny little horn on its butt. 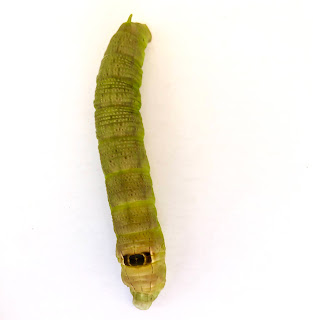 After some late-night internet research, I found a photo that seemed like a match – a sphinx moth caterpillar called Erinnyis alope.

Cheryl brought me the caterpillar in a box so I could check it out. I wondered if it was invasive, however it turned out to be a local species that eats the leaves of various tropical plants, including papaya, cassava, jatropha and allamanda.

I put it in a large plastic crate with some fresh papaya leaves, but it wasn’t interested in eating. Whenever I came by it puffed up its head to make its false eye spot stick out. That’s its way of scaring off predators, and it definitely gave me the creeps.

I decided to keep the caterpillar inside and see what it would look like when it turned into a moth. At other times I have raised monarch butterflies, as well as frangipani caterpillars, which turn into large gray Pseudosphinx tetris moths. It has been amazing for me to see the different cycles of their transformation.

The alope caterpillar kept running around the inside of the crate, and not eating. Given its size, I concluded that it was done eating and was getting ready to transform into its pupa stage. That’s probably why it dropped out of the papaya tree near Cheryl’s door – it was looking for some leaf litter to hide in as it entered its next phase. I picked some dead leaves off the papaya tree in my yard and put them in the crate. After that, the caterpillar stopped running and settled down.

After a couple of days, the caterpillar looked shrunken, and its color had faded. By nighttime, it had made its transformation into a pupa state. Next to it lay the remains of its caterpillar skin, which it had slipped out of. 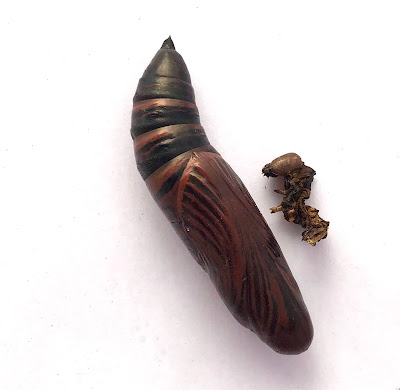 Outside, under ordinary conditions, the pupa would be hidden in the leaf litter on the ground until it turned into a moth. The pupa forms a hard shell on the outside, while inside the former caterpillar body develops into a new winged creature. It is not completely hard, and it can twitch in an alarming way if it is disturbed.

The pupa lay in the crate under the kitchen table for 17 days. I’ll admit that towards the end I occasionally moved the crate a bit to see if there was any reaction. It was reassuring to see small signs of life.

Then one morning I woke up and saw that the pupa shell was empty. The moth must have come out, but where did it go? The crate was not covered, and there was a lot of stuff around the room. It had to be there somewhere.

After a while I decided to think like a newly emerged moth. It would need to let its wings stretch and dry out. So, it probably didn’t get far. I got down on the floor and spotted it on the edge of a chair leg. 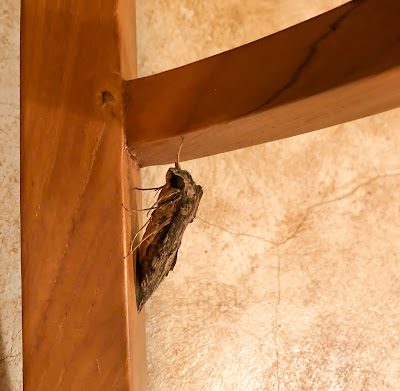 The moth hung on the chair leg all day, even after I moved the chair out onto the screened-in deck. By the next morning it had managed to fly over to the ledge and sit on a stick.

I took a few photos, and managed to catch it showing off the orange on the inside part of its wings. Otherwise, it looked pretty dull and grey. 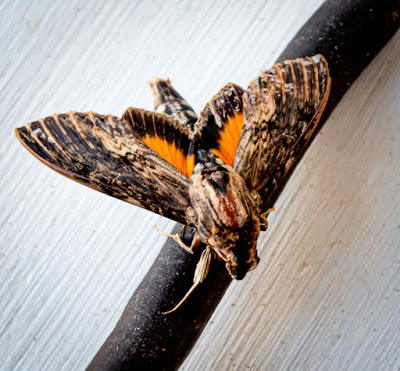 After the photo shoot, I took it outside (riding on the stick) and set it on some of the dead papaya leaves hanging from our tree. It was perfectly camouflaged so I hoped it wouldn’t be picked off right away by a bird.

By the end of the day, it was gone. I hope it flew off to find a mate and successfully continue the cycle of alope caterpillar life.