Watch Out for Ospreys Arriving in the Virgin Islands 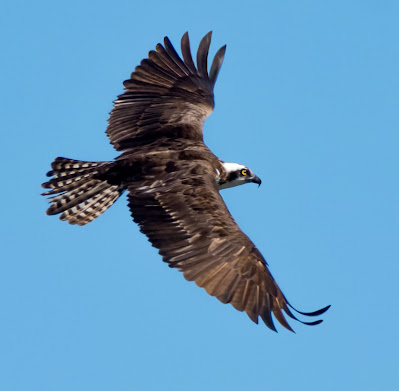 One day while I was swimming, I noticed a large bird sitting on a branch overlooking the water. I slowly swam over to get a better look, and when it ignored me, I eased a bit closer.  Suddenly I heard a rushing sound from behind me, and a dark shadow passed by off to my right side. I ducked, and then looked up to see a second hawk-like bird circling me with a menacing look. When it let out a distinctive high-pitched shriek, I knew it was an Osprey.

Though these birds are sometimes called fish hawks, or in Spanish águila pescadoras (fishing eagles), the Osprey (Pandion haliaetus) is in a family of its own, and not actually a type of hawk or eagle.

That afternoon, I assumed that the hovering osprey was warning me to stay away from its mate perched on the branch. I was feeling pretty vulnerable in the water with my head sticking out, so I quietly backed away, keeping a wary eye on the still-circling osprey. 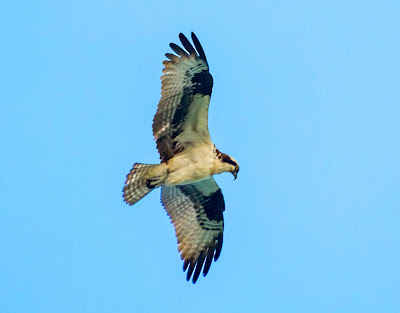 Ospreys are fierce fish-eaters that soar high up over the water and then drop down at high speed with their big talons extended in front of them. I didn’t want those sharp feet anywhere near my head.

Later I wondered if it was really just warning me to get out of its fishing spot. It wouldn’t be defending a nest, because ospreys don’t breed here. The ones that come through the Virgin Islands in the winter mostly made their nests during the summer in the northeast US.

Osprey pairs gather large sticks to make their bulky nests, and usually return to the same ones every season.

I have often seen ospreys raising families during the summer on the big man-made nesting platforms in Jamaica Bay right next to New York’s JFK airport. Platforms like these were first set up in the 1970s as part of an effort to help ospreys recover from the impacts of the pesticide DDT, which caused their eggs to have weak shells. Their numbers fell drastically before the use of DDT was banned in the U.S. but have grown in the years since then and they are no longer considered to be endangered. 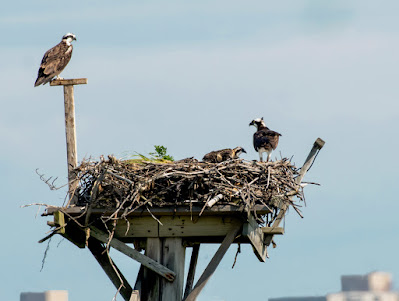 On the coast of Maine, there is a tiny island near my cousins’ house with a huge nest in a tree. Over the years, I have watched osprey chicks grow up in that nest loudly demanding, and receiving, fish deliveries from their busy parents. 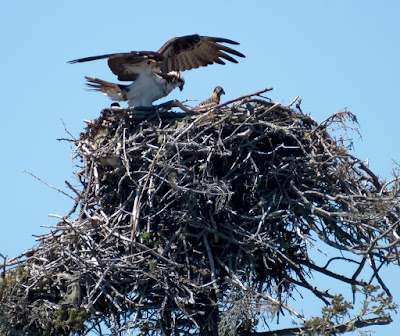 At first the male does most of the fishing for the family. Later the female also helps find food for the voracious chicks. They get quite large before learning to fish for themselves. Then soon after they learn, they start their migration south. 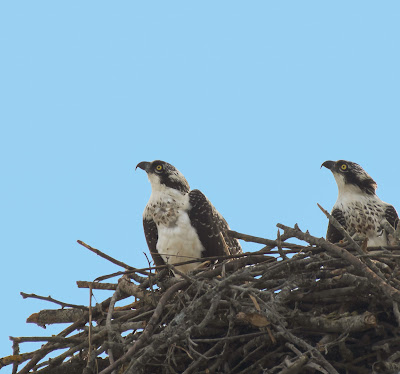 I began to wonder why ospreys come all the way down here anyway. And once they are here, why don’t they stay. Maybe there aren’t enough big fish here for an osprey couple to raise a family and feed those hungry chicks. Other raptors that are permanent residents in the Virgin Islands – like Red-tailed Hawks and the smaller American Kestrels – have more varied diets. 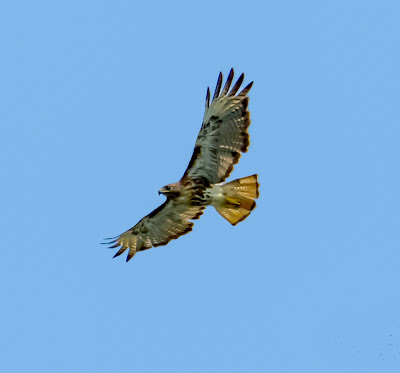 Inadequate food availability is the main motivation for most bird migration. Though ospreys pretty much only eat fish, it seems like there would be plenty of fish in the Atlantic Ocean, even in the winter.

Yes, but it can get icy in the water up north. And I read that some of the fish move deeper or farther offshore in the winter. So, the ospreys in the northeast work their way down the coast into warmer water. Some keep going into the Caribbean and on to South America. The ospreys in the more southern U.S. states generally stay put, though.

Ospreys are not really sea birds. They are often found near freshwater lakes and rivers, as well as coastlines. Wherever they are, they prefer relatively shallow water, and most of the fish they catch are within 3 or 4 feet of the surface. They perch or hover high in the air until they visually spot their prey, then dive down vertically to grab the fish with their feet.

Ospreys actually get fully submerged in the water – unlike Bald Eagles, which just fly low and scoop up fish up close to the surface with their outstretched feet.

Once in the water, ospreys are able to rotate their powerful six-foot wings in a figure-eight motion, which creates enough lift for them to rise right back out of the water – sometimes carrying heavy fish in their talons. Amazing to watch. 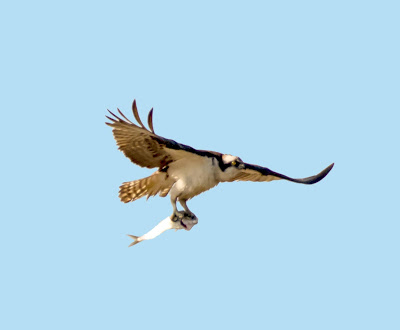 Ospreys have oil on their feathers to keep their wings from getting waterlogged when they go underwater. Then while flying away after a dive, they will sometimes stop and shake like a dog to get rid of excess water on their wings.

I don’t actually see a lot of ospreys on St. John, so I got excited a while ago when a neighbor called to let me know there was one perched on a dead tree in Fish Bay. I went out to get a photo, but it was inaccessible by land, and too far away to get in focus, even with my telephoto lens.

I decided to wade out into the shallow, silty bay, carrying my camera, to see if I could sneak up on it and get a better shot. I was busy focusing on the bird until I suddenly noticed that a small blacktip shark was brushing against my legs. So maybe I went in too deep, but how could I pass up the opportunity to get closer to such a great bird. 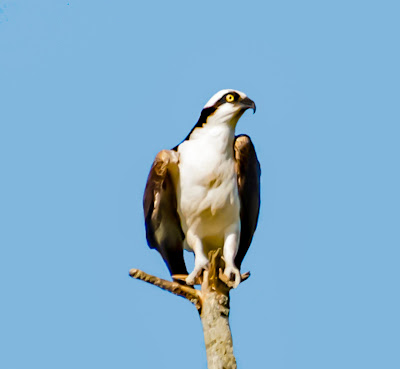