Elusive Baobab Flowers Open at Night and Fade the Next Day 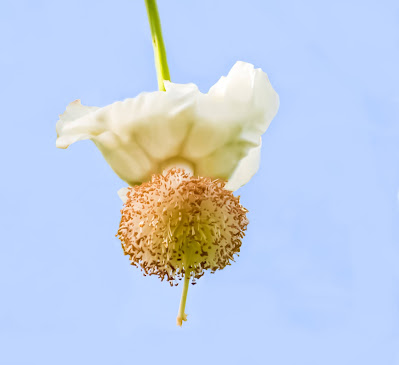 The flowers on the baobab tree hang down on a stalk thick enough to support the weight of pollinating bats.

These enchanting flowers are designed to attract nocturnal pollinators like fruit bats and hawk moths, not people. But if we are lucky, we get a brief chance to enjoy them before they drop.

This summer, my husband and I made frequent early morning treks down the L’Esperance trail on St. John to look for flowers on the island’s only mature baobab tree (Adansonia digitata). (There are some other smaller ones that people have planted, but they are still too young and small to flower.) 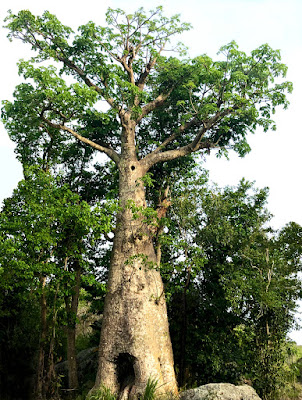 The large baobab tree on St. John was battered by the 2017 hurricanes, but has recovered and grown new branches.

It was a 45 minute hike each way through the woods to the ruins of the old Seiben estate, but well worth the effort. Several times friends came along to share the experience.

We were delighted to see a flower in bloom the first time we went, plus numerous unopened buds that looked like tennis balls hanging from the tree. We kept going back to check on their progress. 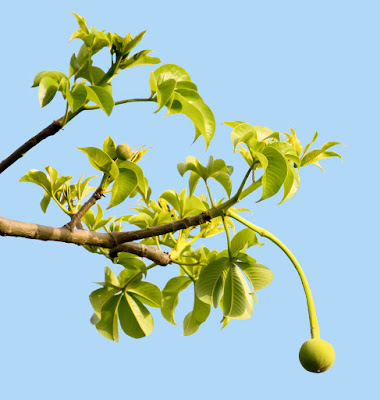 My husband thought the unopened flower buds on the baobab tree looked like tennis balls.

One time we went in the late afternoon and waited to see if we could catch any of the buds starting to open. Unfortunately, nothing happened by the time the sky started to get dark, and it was a long hike back. My husband suggested spending the night and using our flashlights to keep watch on the tree, but I wasn’t game enough for that.

I read that only one of a baobab tree’s flowers opens at a time. However, once I saw two that both looked like fresh blooms, and my friend Mandy in St. Croix said she saw more than one at a time on the tree by the entrance to the St. George Village Botanical Garden.

But we did observe that the flowers don’t all bloom at once. This strategy could be because a hungry bat would have to visit more than one tree to get its fill of nectar, and so would be more likely to spread pollen from one tree to another. Cross-pollination generally promotes genetic diversity, and therefore better survival of the species.

The flowers on St. John’s baobab cannot get cross-pollinated from flowers on another nearby tree, and are not known to produce any fruit. Its flowers do have both male and female parts, but do not seem able to self-pollinate successfully,

We didn’t see any bats or moths visiting the flowers in the early morning, but there were other types of potential pollinators attracted to the flowers’ nectar, including honey bees, carpenter bees, and hummingbirds. 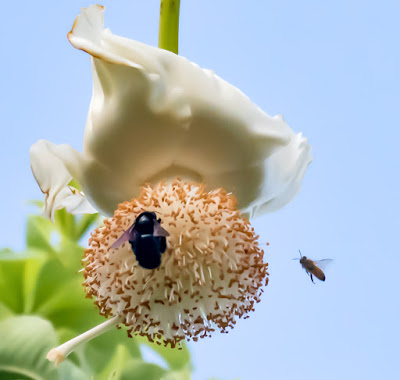 A large, black carpenter bee and smaller honey bee were both interested in a freshly-opened baobab flower.

The round, white, pom-pom part of the flower holds the pollen on its brown tips. The tube that sticks out of the center is the style, which leads to the flower’s ovary.

Soon after the flower blooms, the white spikes dry up and turn brown. 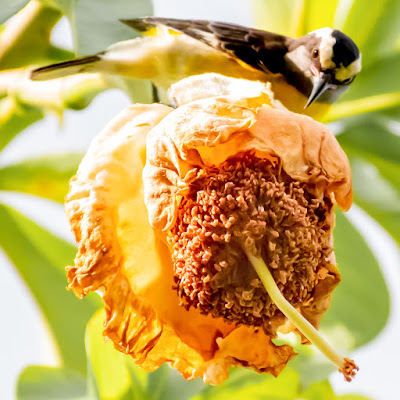 A bananaquit probed a dried-up baobab flower for nectar before the pom-pom part fell off.

Then the dried pop-pom part slips off and falls on the ground, leaving the style in place. The fuzzy-looking part in the center is where the fruit develops after a flower is successfully pollinated and an egg in the ovary is fertilized. 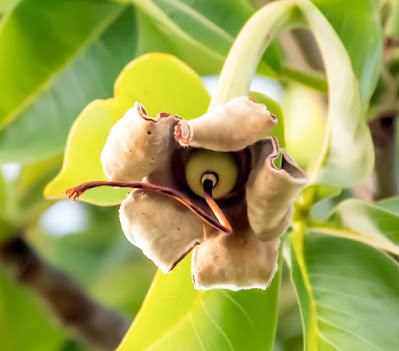 Though the blossom doesn’t last, the remains of a baobab flower can stay on the tree for a long time.

Although the St. John tree does not bear fruit, the ones on St. Croix do. A few years ago I visited the famous Grove Place baobab tree and brought back some of the furry fruits. That tree is enormous. It has been estimated to be about 250 to 300 years old. 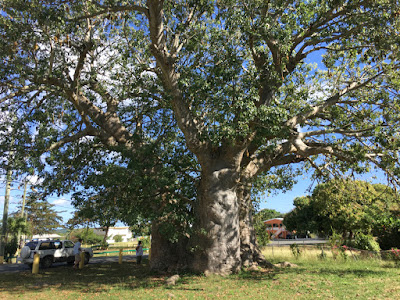 Robert Nichols, in his book Remarkable Big Trees of the US Virgin Islands, reported that the Grove Place baobab tree was 53 feet high, with a trunk 53 feet around.

Although some baobab trees are native only to Madagascar (an island 250 miles east of Africa), the type found in the Caribbean comes from the African continent. Baobab seeds were reportedly brought to the Caribbean in the 1700s on the slave ships. 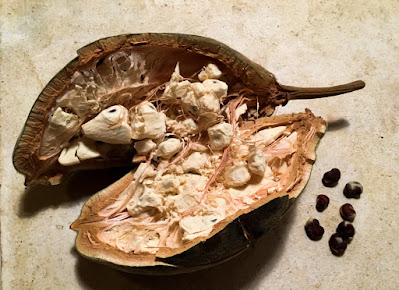 Baobab seeds are highly nutritious and surrounded by a tart, pulpy coating.

In the African savanna, the long-lived baobab is known as the ‘Tree of Life’ because the spongy wood inside its trunk is able to store (and provide) water, while the tree’s fruit, seeds and leaves feed people and wildlife during dry seasons. 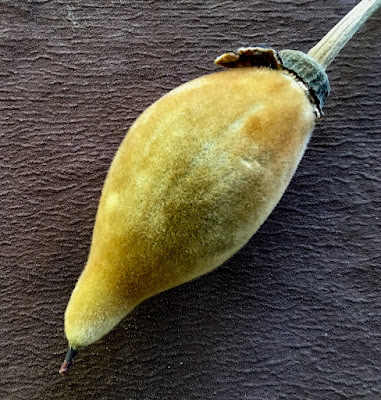 The fuzzy baobab fruits look a bit like small, furry animals hanging in the tree.


tried planting a few baobab seeds myself, but did not have any success. However, a friend gave me a small seedling last year, and I have managed to keep it alive so far. I was worried when it didn’t grow at all during the winter, but it turns out that baobabs have a dormant period. I was excited to see new leaves coming in the spring. With any luck, it will grow to be huge, and live on for centuries.