Flamboyant Trees are Originally from Madagascar

All around the Virgin Islands, especially on St. Thomas, the hills in summer are lit up by the brilliant glow of flamboyant trees – so bright that some people call them flame trees. The flowers remain on the trees for several months, providing a long-lasting source of blazing color.
They are not growing wild though. Many are located next to people’s houses, clearly cultivated as beloved friends.
In fact, my husband and I planted several of them ourselves when we built our house. Since then I have learned that the flamboyant trees (which have the scientific name Delonix regia) are native to Madagascar, an island off the coast of Africa. (Delonix comes from Greek, and refers to the claw-like shape of the large petals.)
These trees have become very popular in many tropical areas around the world, though sadly they are now endangered in Madagascar due to deforestation. How did they get to be so widespread?
The flamboyant tree was first noticed by Europeans in the 1820s. In 1821, a young botanist named Wenzel (or Wenceslaus) Bojer from Bohemia (now the Czech Republic) was sent on an expedition to Mauritius, an island in the Indian Ocean about 700 miles east of Madagascar. The next year he explored Madagascar and collected specimens from the forests, including flamboyant seeds. Presumably he brought the seeds back to Mauritius, after which they were transported to India in the 1840s, and subsequently shared in other tropical regions.
Eleanor Gibney, an expert on Virgin Islands trees and history, believes that flamboyant trees were probably introduced into this area around the mid-1800s, based on historical Caribbean plant lists. They were recorded as common in West Indian gardens by the 1880s.
However, when I was researching the history of flamboyant trees in the Caribbean, I found a number of sources linking them to Philippe de Longviliers de Poincy, a French governor in the 1600s who was involved with the colonization of St. Kitts, St. Martin, St. Barths and St. Croix. This was quite confusing, and seems to be due to the fact that a smaller, shrub-like tree from the American tropics with similar flowers, Caesalpinia pulcherrima, was called Poinciana, in honor of Poincy. Then when the larger flamboyant tree was discovered later, it was called Royal Poinciana because of its flowers, even though it was unrelated to the Caesalpinia pulcherrima or Poincy, and came from a different continent.

he Caesalpinia pulcherrima was rechristened Dwarf Poinciana, but is more widely known in the Caribbean as the Pride of Barbados.

On St. Thomas, the abundance of flamboyant trees is reportedly due to the enthusiasm of a particular fan, Ariel Melchior, Sr., who was the founder of the Virgin Islands Daily News. The story is that he loved these trees so much that in 1947 he paid local children to collect the seeds. Then he hired his friend Jack Monsanto, who owned a plane and ran an air taxi business, to fly low over St. Thomas and scatter the seeds.

The seed pods are green at first, then become hard and dark brown, up to two feet long. The seeds inside are loose and make a rattling sound when you shake them, so the pods can be used as musical percussion instruments, locally called shack-shacks.

Flamboyant trees do create a lovely, dense canopy in the summer, providing shade for yards and walkways. Things are quite different in the winter months, however. Even though the trees are generally drought-resistant, they are deciduous, regularly shedding their leaves. The bare branches are much less attractive, with only the brown pods still hanging on them. 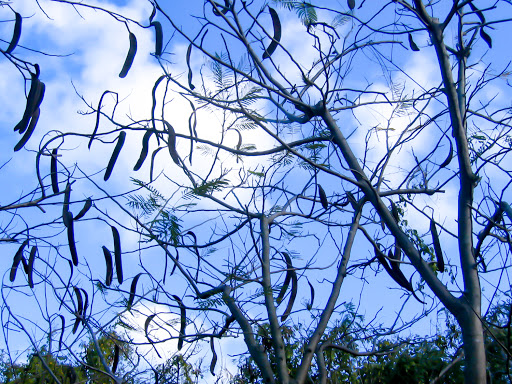 In the yard, flamboyant trees are also able to keep other plants from growing close to them, so the areas near them and the ground below them also will be bare. The roots can be a problem, too, as they extend quite far horizontally along the ground, and are able to create cracks in sidewalks or other structures, possibly even cisterns.

Flamboyant trees generally only live about 30 years, but there is no question that they put on a fabulous summer show while they last.