Sympathy for a Thrasher? 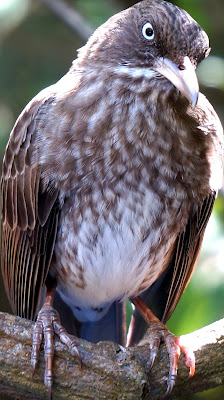 Even St. John bird lovers generally scorn the pearly-eyed thrashers or ‘thrashies’. When Laurel Brannick leads the National Park’s Friday morning bird walks at Francis Bay, she refers to them as ‘thieves’.

Visiting birders are eager to add these thrashers to their Life Lists because the pearly-eyes are found only in the Caribbean. However, people who stay around for a while tend to quickly adopt the local prejudice against them.


Why do people hate these birds, which are smart, successful, native to the Virgin Islands, and talented vocalists, like the much-loved mockingbirds? Experience, I guess.


The first time I became aware of a problem with thrashers was at a Trunk Bay picnic table while eating burgers and fries with my two young sons and some friends. We were sitting under a tree and enjoying the shade, oblivious to the dangers lurking above us. Suddenly a large reddish blob fell right on top of the plate of fries. A more experienced island mom quickly realized what had happened and whisked away the fries, while wailing children insisted that it was just ketchup or that they didn’t care if it wasn’t. In the meantime the snack bar had closed and the kids began shouting angrily at the bird responsible for their loss. Later when they had reached the resignation stage, they began throwing the contaminated fries to a group of happy thrashers.


When we were more settled and had planted some fruit trees, my own resentment of the thrashers mounted as they circumvented all my efforts to protect the ripening papayas. 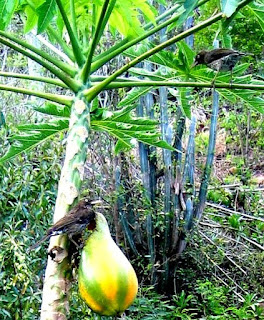 The thrashers eat large insects, fruits and berries, as well as an occasional lizard or frog – or another bird’s eggs and nestlings.


The distinguished and usually tolerant Cornell Lab of Ornithology shares the general dim view of pearly-eyed thrashers, referring to them as avian ‘supertramps’ – aggressive colonizers, nest predators, and poachers that are partly to blame for the depletion of coexisting island species.


So I was surprised recently to find myself filled with compassion for a neighborhood thrasher. She was sitting on a nest high up in a Christmas palm, which I noticed when I was out hiking. Of course I took a picture of it, though it was difficult to get a good angle on what was in the nest. When I looked at the pictures at home on my computer I realized that there were at least a couple of hatched babies in the nest, plus a blue egg hanging precariously on the outside. 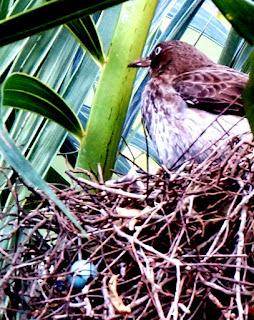 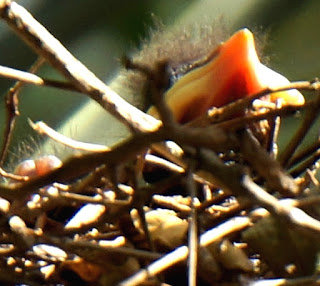 A few days later I walked back that way – and was shocked to see that the nest was gone. There were just a few twigs tossed around and a broken egg shell on the ground. 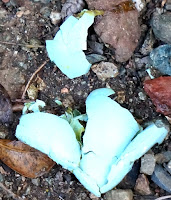 A bird I took to be the mother sang plaintively in a nearby tree, and my heart went out to her – even if she was a ‘supertramp’.


Later I had some dark doubts. What if that bird was actually a predatory thrasher that had come and eaten some other bird’s nestlings and then was singing to celebrate the feast? I had to quickly reject that thought because I didn’t want to recognize the possibility that I could have been taken in so easily. Instead I congratulated myself on my depth of compassion for other living creatures, even pearly-eyed thrashers.
Posted by Gail Karlsson