Red, White and Blue Birds in the Fish Bay Wetlands 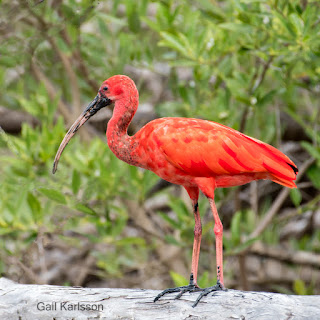 Even though the ponds in the Fish Bay wetlands are mostly dried up now due to lack of rain, there are a couple of places where there is still some water, and those are attracting a variety of birds.

The celebrity Scarlet Ibis is a new winter resident, maybe a stray from the group at Necker Island in the British Virgin Islands, or maybe a wanderer from farther away. It arrived in the Fish Bay area in December and was still around in early April. There has also been another one near Annaberg.

The one in the Fish Bay wetlands wanders around sticking its long bill into the mud and pulling out fiddler crabs, insects and other treats. Sometimes it then walks out into the water and rinses off its bill - interesting behavior to observe. At other times it walks through the water, seeming to snap up bugs and maybe small fish. 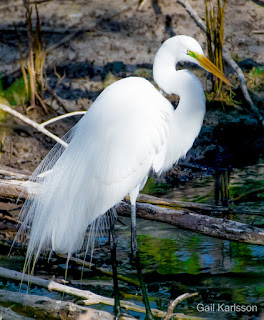 The largest white birds are Great Egrets, and they are year-round residents. They can be seen walking the roads hunting for lizards, and they are also going after the fish now trapped in the remaining pond water. Meanwhile they are showing off their long, wispy breeding plumage, along with green coloring around their eyes, in preparation for finding a mate.

You can also sometimes see another permanent resident, the smaller Snowy Egret, which has a dark bill and striking yellow feet. 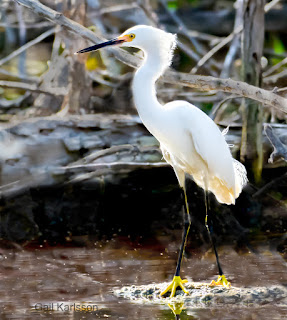 The Little Blue Herons are less visible but they are also resident birds, hunting for fish in the ponds and bays. Interestingly, the juvenile ones are white until they are about one year old. After that they begin to add blue feathers, a few at a time. They are smaller than the Great Egrets, their legs are light green rather than black, and their bills are a two-toned gray and black rather than a yellow. 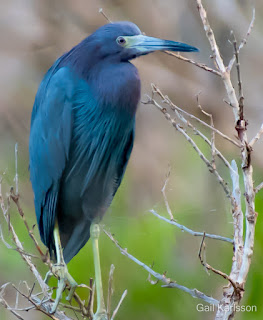 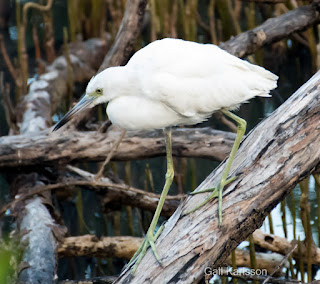