﻿﻿﻿﻿﻿﻿
The Academy Awards red carpet certainly showcased many glamorous gowns, but some St. John celebrities have their own stunning outfits – and I’m not referring to the tie-dye display at the recent Hippie Love Fest in Coral Bay (though that was truly awesome).


Here in Fish Bay I have been stalking some reclusive style-setters that hang out around the mangroves, and recently enlisted my husband to help me search for them. We set out in our neighbor’s two-seater kayak, like seagoing paparazzi. I sat in the bow with my telephoto lens while he paddled slowly along the red mangroves at the edge of the bay.


My main goal was to get some close-ups of a group of Ruddy Turnstones I had glimpsed on the shoreline when I was kayaking alone, without my camera. We searched unsuccessfully for a while until we were distracted by a Little Blue Heron wading in the shallow water. It was more than willing to pose for us and we quietly drifted closer and closer.


During breeding season, the feathers on the necks of Little Blue Herons are a lovely shade of purple, and long ribbon-like plumes extend from their heads and necks. Our model turned for us so its plumes fluttered prettily in the breeze, though its yellow eyes were hard and cold, and its black-tipped bill turned downward.


Soon an even flashier beauty strolled out into the bay – a Great Egret in breeding plumage. Its bright white feathers were overlaid with long delicate back plumes, called aigrettes. These plumes used to be popular for adorning fancy women’s hats, and the birds were hunted until hardly any were left alive. This one  proudly showed off its healthy vitality, with its plumes and dramatic green eye shadow highlighting its breeding status.

We finally caught up with the Ruddy Turnstones on a sandy strip of shoreline. A few weeks ago their feathers were mostly grayish, not ruddy - though their orange legs were quite flashy. Now their feathers seem to have gotten a bit redder, and their faces are beginning to develop their special breeding markings. By the time they fly off to their breeding grounds in the Arctic this summer their faces will be darkly patterned, like harlequins.

Back on shore by the black mangrove pond, I found an old friend and neighbor who seemed to want to be included in the show. Yellow-Crowned Night Herons are always dressed for success – but rarely display the spiky crests on top of their crowns. This one gave me a high-five as well, or maybe was just showing off its smooth greenish-yellow legs and dark-tipped toes. 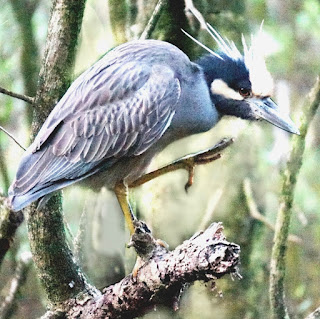 I am very grateful to have such glamorous neighbors, especially when they are so willing to pose for my amateur photo shoots.