Mixed Up About Manchineel?

The most famous sign on St. John is probably the ominous red board on the road to Annaberg that says “Warning! Manchineel Tree.” 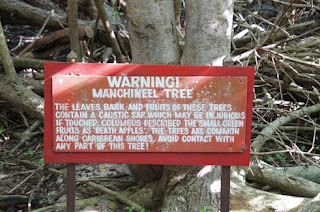 According to the sign, Christopher Columbus described its small green fruits as “death apples.” Diego Alvarez Chanca, a Spanish doctor who sailed with him in 1493, noted that: “There were wild fruits of various kinds, some of which our men, not very prudently, tasted; and on only touching them with their tongues, their mouths and cheeks became swollen, and they suffered such a great heat and pain.”
Its sap is very caustic as well, and was reportedly used by the Caribs to poison their arrows. The Spanish explorer Ponce de Leon is said to have suffered a long and painful death in 1521 after being hit by one of those poisoned arrows when he attempted to occupy territory in what is now Florida.
Given this history, you would think that everyone would learn what this tree and its death apples look like. Sadly, that is not so.
I recently heard that a small child took a bite from one of the little apples and suffered a sore mouth and swollen throat as a result. The fruit tastes sweet at first, and then quickly you start to feel the burn. Usually the symptoms go away after a few painful hours, especially if the person spits it out right away rather than swallowing it.
My friend Suki Buchalter, who is working with me on the Unitarian Universalist Fellowship’s tree identification project, suggested that we should help tell people how to recognize manchineel trees, because they grow other places on St. John than on the Annaberg Road and those are not marked. One thing she was concerned about was that some people were being told that the manchineel has heart-shaped leaves – which is not right. My husband said he had heard that also.
﻿
I carefully picked a few of the fruits that had fallen around the tree. Some were from the maho and some were manchineel apples. Even on the ground they looked similar if the maho fruits were lying butt up, though the maho fruit is not round if you see it from the stem side.
﻿
﻿