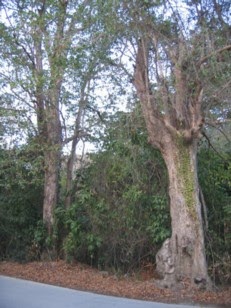 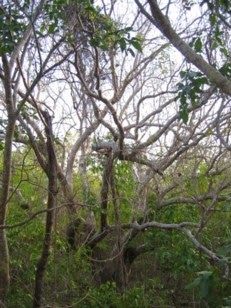 Generally, if you show people a picture of a landscape they don’t think ‘Oh look at all the interesting types of trees.’ They will focus on the other things in the picture – the flower, the deer, or the couple on a blanket – with the greenery mostly just a backdrop for the real action.


So, for years I drove around in St. John and didn’t pay much attention to the trees unless they had fruit on them, or the ‘bush’ got so thick it encroached on the road. But now I have finally gotten acquainted with some of the more noticeable local trees. I give them a nod as I pass by, and the road seems less lonely.


I was inspired by a book Remarkable Big Trees in the US Virgin Islands. I had just identified a few of the native trees on my own land, and thought it would be interesting to see what remarkable big trees I could find in my Fish Bay neighborhood. Much of the area nearby is owned by the Island Resources Foundation as conservation land, so that seemed like a good place to start.


We took digital photos of some of the larger trees, and GPS coordinates so we could map them, or find them again later. We sent the photos to Eleanor Gibney, a local plant expert and author of a book about native trees, who helped us identify some of the trees. To me, many of the trees and leaves looked very similar. It’s like learning a new language, reading the tree leaves to figure out their identities. It helps a lot to distinguish them if the trees are in bloom, or have fruits on them.


Big trees have long had cultural significance as boundary markers, landmarks, shady areas for open markets and spaces for cultural and political assemblies. Eleanor Gibney told us that during the 20th century the large old trees in Fish Bay probably provided shade for cattle, while the rest of the land was cleared for grazing. In the colonial era there were cotton plantations in the area and much of the flat land was cleared of smaller native trees at that time, but until recently the hillsides around Fish Bay were some of the least disturbed on St. John, with an abundance of rare and threatened species.


Several of the trees we found – tamarind, gri-gri, water mampoo, sandbox and genip – were highlighted by Robert Nicholls in the Remarkable Big Trees book as ‘spirit trees’. These trees were traditionally viewed as mediators between human society and spiritual and ancestral realms, in addition to being providers of food, fuel, wood products and medicines. The book explains that beliefs about spirits in trees were transplanted from Africa and attached to similar tree species found in the Caribbean. Some trees were believed to be inhabited by ‘jumbies’ – a term usually thought of as meaning ‘ghosts’, but also referring to animistic spirits that occupy natural objects.


Large boles, buttress roots and caves formed by protruding roots are all indications that jumbies are living in a tree. I have to say I did notice that some trees really look like they have strong personalities, and I try to always be very respectful of them.


On the eastern side of the flat land, past the one-way bridge, there is a long stretch of road skirting the edge of a wetland area that is mostly covered with black mangroves. The land here is salty and appears to have been flooded at times by water coming in from the bay. Closer to the shoreline there are red mangroves whose above-ground roots seem to walk out into the bay. Egrets and herons roost in the mangroves, along with pelicans and other indigenous and migratory birds. The shallow water around their roots serves as a nursery for many types of fish – and watch out for the baby sharks! The mangrove roots also filter storm water and collect silt, which helps prevent erosion, and runoff of sediments and pollution into the bay during periods of heavy rain.
For more information see the report